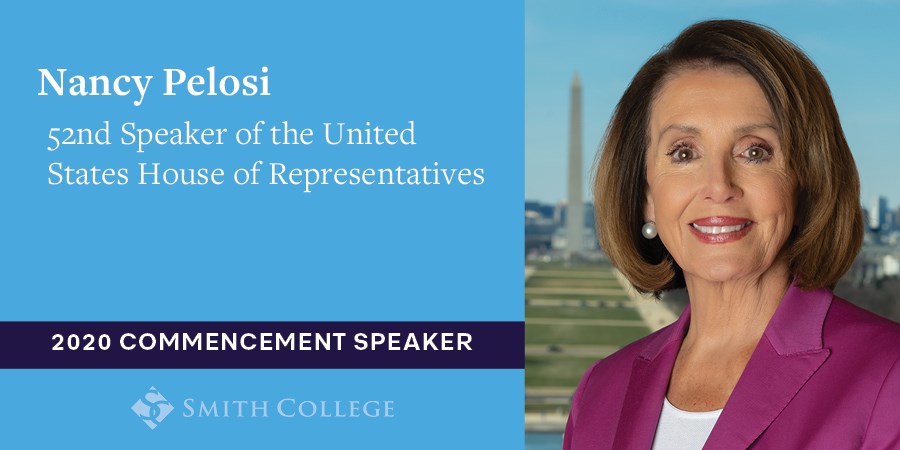 Smith College announced on Thursday that Nancy Pelosi, the current Speaker of the U.S. House of Representatives, will deliver the College’s 2020 commencement address.

The ceremony, which will only be open to graduates and their families due to seating, will take place on Sunday, May 17. In a press release, the director of media relations, Stacey Schmeidel, noted that Pelosi has had a “long and distinguished career in public service [which] has helped shape and define women’s leadership.”

“Nancy Pelosi is the highest-ranking elected woman ever to have served in the United States government,” the press release stated about the California Democrat.

The press release detailed several accomplishments from Pelosi’s lengthy career, including her work on the Affordable Care Act, the Lilly Ledbetter Fair Pay Act and the repeal of “Don’t Ask, Don’t Tell.” First elected to Congress in 1987, Pelosi represents California’s 12th congressional district. In 2007, Pelosi was the first woman elected to serve as Speaker, a position she held until 2011.

“Now in her third term as speaker, Pelosi made history again in January 2019 when she regained her position second-in-line to the presidency, the first person to do so in more than 60 years,” the press release added.

Pelosi, a graduate of Trinity Washington University in Washington, D.C., will receive an honorary degree at the commencement. Several other honorary degrees will be awarded, according to the press release. The list of honorees includes diplomat and climate change activist Christiana Figueres, advocate for immigrants Cristina Jiménez, pastor and educator the Rev. Gloria Elaine White-Hammond, Smith alum and author Hanya Yanagihara and educator Gwen Agna, who plans to retire this spring after 24 years as principal of Northampton’s Jackson Street School.

In 2019,Pelosi delivered a commencement address at San Francisco State University. In 2018, Pelosi visited the Pioneer Valley as the commencement speaker at Mount Holyoke College.