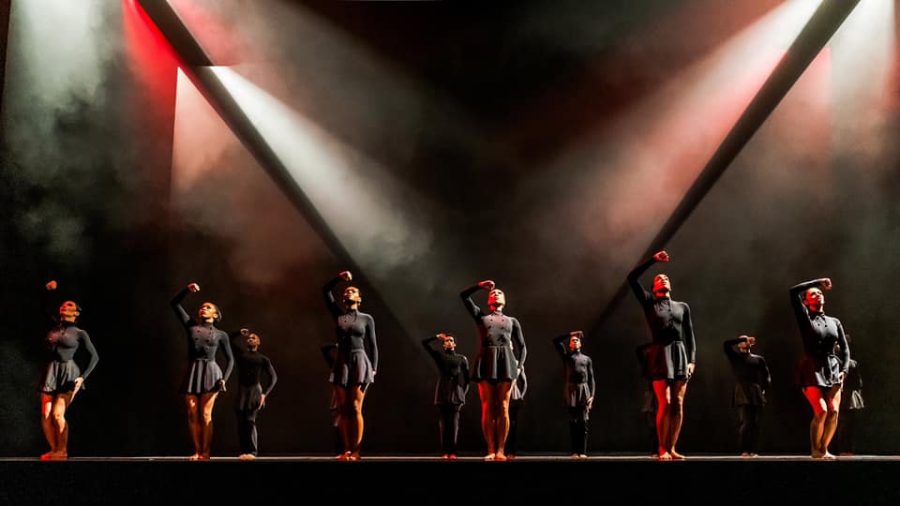 It’s rare to find a dance company like the Philadelphia Dance Company. Better known simply as Philadanco, they quite literally do it all: Impossibly robust choreography? Check. Combine ballet, contemporary, West African and hip hop in one performance? Check. Pay homage to the past whilst simultaneously feeling completely revolutionary? Check, check and check. The company’s 13 dancers lit up the Fine Arts Center stage on Thursday night with both sheer athleticism and raw artistry in a tour de force program.

Philadanco, now in its 50th season, is one of the country’s premier predominately African-American dance companies. Under the direction of legend Joan Myers Brown, Philadanco is known for its high intensity, versatile repertoire. The Fine Arts Center performance was the second stop of the company’s February tour, and featured four ballets.

Ray Mercer’s “Super 8!” was a testament to the power of human relationships. Eight dancers weaved in and out of synchronization with each other, at times playful, while other times sensual. Ending dancing in unison, the comradery amongst the dancers was enjoyable to watch. Their movement clean and crisp, “Super 8!” was a strong start to the evening.

The highlight of the program came in Anthony Burrell’s “Endangered Species,” a powerful look at the dichotomy between black men and the criminal justice system. The company’s six men, clad in red prison uniforms, began the ballet facing away from the audience, their arms raised in surrender. Branded across their backs were the names Trayvon, Eric, Michael, Freddie, Philando and Emmett. A chilling moment came in the middle of the piece when, amidst the choreography, each man dropped to the ground, a red haze fell over the stage and the audio from reports on Trayvon Martin’s death began playing. However, the piece as a whole is not a tragedy but rather a celebration of the strength of black men. In the second half of the ballet, the six danced as a unit, beating their chests and dancing as one. Dancers ended triumphantly with their fists raised in the air in solidarity.

At times politically conscious choreography can appear forced, cliche or out of touch. “Endangered Species” is none of these. To classify Burrell’s choreography under one genre would be doing him a disservice. Spinal undulations paid homage to West African styles whilst the dancers’ hard-hitting, grounded movements had a clear hip hop influence. Still, the six men turned and jumped with ease, with balletic movement laced into the choreography without feeling out of place or disjointed. What elevated Burrell’s choreography was the dancers’ complete dedication to their storytelling. Their pain, anger and later pride was palpable throughout.

Later, dressed in all white and performing under dozens of light beams, dancers appeared other-worldly in Thang Dao’s “Folded Prism.” Though this piece felt like a lull in the evening, the dancers made intricate technique look effortless. Impressive partner work took center stage, most notably a lengthy duet between dancers William E. Burden and Joe Gonzalez. The intimate moment shared between the two men was a modern look at the 21st century pas de deux: they were graceful, yet full of strength, power and masculinity.

The evening concluded with Christopher Huggins’ “Enemy Behind the Gates,” one of Philadanco’s signature ballets. The entire company appeared in all black and the lighting fell in columns across the stage. Huggins was inspired by the feeling of not knowing who you can trust, as the program notes describe the “enemies” that surround us, “They look like you, they act like you, they live like you but, they are not one of you.” In one word, “Enemy” is cool. Despite the rapidly changing tempo, quick transitions on and off stage and falling and contorting choreography, dancers appeared sleek and in control. This ballet is Philadanco at its best: explosive, electric, absolutely spellbinding.

As a whole the program was jaw-dropping. Perhaps the most refreshing aspect of the evening was the equal attention given to both the men and women. Men are often subjected to the back of a company’s repertoire, used only for lifting and turning women. Philadanco rejects this completely. Each dancer contributed to the performance equally, with the men often taking center stage and driving the choreography. Their enthusiasm was captivating; you could feel the company’s energy pulsing through the audience.

Emma Garber can be reached at [email protected]