Philpott’s four goals help lift the Minutemen over the No. 1 Bulldogs 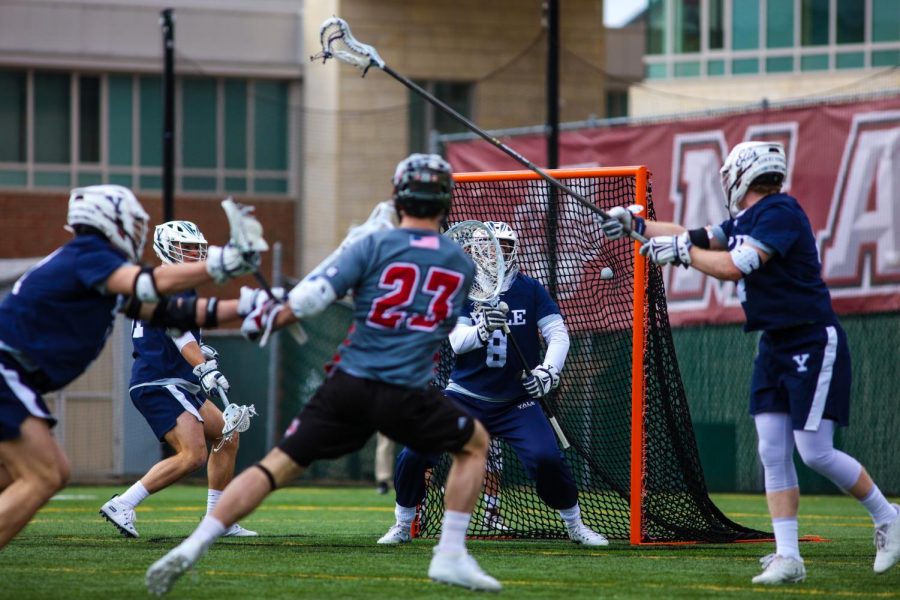 Billy Philpott and Jeff Trainor left Garber field with a combined nine points in a statement victory for the Massachusetts men’s lacrosse team on Saturday.

Philpott, who has been a key player in UMass’ offense this year, set a new career-high of four goals in the game. The afternoon’s effort brought his season total up to nine, tied for second on the team behind Gabe Procyk.

“Billy really shot the ball well,” coach Greg Cannella said. “He got to the middle of the field a few times and finished the ball.”

Philpott was quick to credit his teammates for his success in the offensive end against the Bulldogs.

Trainor finished the game with two goals and two assists, but his attitude is what really sets him apart. His intensity both on and off the field is infectious, and he will do whatever it takes to help his team win games.

“Jeff is a warrior,” Cannella said. “He’s playing offense, defense, back and forth. I think our team feeds off of those guys and their energy, and they’re captains, so that’s their job.”

After leading 11-2 at halftime, Yale battled back within three and still had almost the entire fourth quarter to tie it up. However, the Minutemen continued to fight and didn’t allow the Bulldogs to close the gap.

“I was proud of our resilience, and it took all the guys on the field to get this win today,” Trainor said. “So I was happy with our effort and with our play from everybody top down.”

One of the key things that both the players and Cannella spoke about was keeping the pressure and not getting complacent. That started with Philpott and Trainor and trickled down to the freshmen.

“In lacrosse it’s a really hard thing to keep a lead and when you jump out like that you know they’re going ti throw a punch in the third quarter,” Trainor said. “I thought we did a really good job weathering the storm.”

UMass has a mixture of veteran players like Trainor and Philpott and a fair share of young talented players making an impact early on, including freshman goalie Matt Knote, who finished the game with 12 saves.

“Truthfully I expect that out of him now,” Philpott said. “He’s one of the guys I get to sit next to every day in the locker room and be in his ear, but he’s been really good and consistent for us all year.”

Despite toppling the best team in the country, Trainor is always looking for improvement in himself and his teammates. While he was happy about the Minutemen offense as a whole, he believes there is still plenty of work to do.

“The second half, we only had two goals,” Trainor said. “We’re still trying to figure it out, and we try to get better every day.”

UMass has had an up and down start to the season, but have already beaten two ranked teams in No. 18 Ohio State, No. 12 at the time, and now No. 1 Yale. They will continue to rely on the leadership of Trainor and Philpott down the stretch.

The Minutemen will be back at Garber Field this Tuesday against Albany. Face-off is scheduled for 3 p.m.