The student judiciary called a recess four hours into the hearing 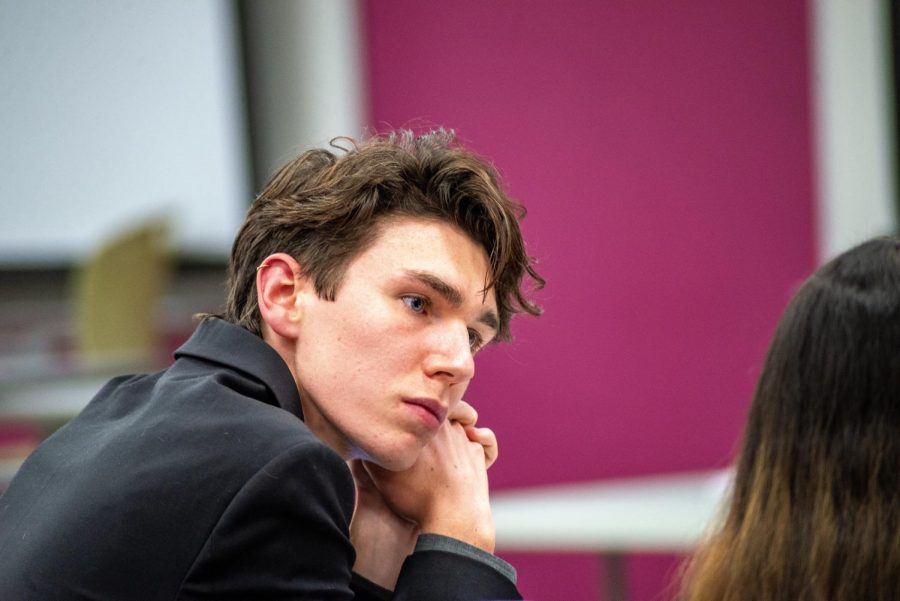 By Sophia Gardner and Kathrine Esten

Shortly after 10 p.m. on Thursday, Feb. 6, the judiciary of the Student Government Association went into recess during the removal hearing of student body president Timmy Sullivan. The hearing will be continued at 5:30 p.m. on Friday, Feb. 7. The room has not yet been announced.

Sullivan was impeached on Dec. 4 in a 38-13 vote in the SGA senate based on two articles of impeachment which focused on alleged bylaw violations and “overreported” payroll funds. Sullivan has remained in office as an SGA official and can only be removed or recalled by judicial decision.

The initial hearing was announced on Feb. 5 and was held in the Integrative Learning Center starting at 6 p.m. Following four hours of opening arguments, questions over protocol and the presentation of witnesses for the SGA senate, the judiciary announced it would continue the hearing in another session.

The senate representatives rest their case at 10:13 p.m. Given the time, the judiciary calls a recess and will reschedule another session within 72 hours. @MDCollegian

Approximately 50 students, including members of the judiciary, petitioners and respondents, sat in the large lecture hall where the hearing was held, with some leaving early or arriving late. This number fluctuated due to several recesses held throughout the evening ranging between five and 30 minutes.

Halfway through the first recess, many audience members and witnesses have left the room. Several returned with Blue Wall to-go containers. https://t.co/KEAI14tOWE

At the start of the hearing, the petitioners and respondents introduced themselves before presenting opening statements. The petitioners included several representatives from the SGA senate: chair of the rules and ethics subcommittee Jordan McCarthy, Senator Patrick Collins, Senator Nick Flanagan and Senator Sean Vo. Chair of Administrative Affairs Althea Turley also asked questions on behalf of the senate and conferred with the other representatives.

The respondents included Sullivan and the SGA Attorney General Ilina Shah, who announcedon Wednesday she would serve as Sullivan’s judicial advocate.

During the respondent questioning of the petitioner, there was some unresolved confusion around the role of the judiciary in the hearing, because of the lack of precedent. Several protocol questions established that all evidence had to be confirmed by a witness with first-hand experience with the conversation and/or documents in question.

“Maybe this case will be referenced in the future, I’m sure it will be,” McCarthy added, noting how there is no clear precedent for the impeachment process.

Judiciary explains that in order for evidence to be considered, it must be confirmed by a witness. Representatives may reference it but it is not under consideration until witnesses have been called.

The petitioners called on five witnesses. The first was student trustee and former secretary of the registry Jake Binnall, who testified regarding the work he did for the SGA over the summer. He was questioned about his declined request to be paid for this work by both the petitioners and the respondents.

Jake Binnall, student trustee and former secretary of the registry, has been called as the first witness. @MDCollegian

The second witness was Turley, who was called as an expert witness on the SGA bylaws and spoke about her involvement in the investigation.

The third witness called was Vice President Hayden Latimer-Ireland, who testified about the work that she and Sullivan did in the first few weeks after she was sworn into office, as well as about her own failure to complete paperwork required for her to get paid for her work.

The petitioners’ fourth witness was Amelia Marceau, the chair of the Ways and Means Committee. Marceau served as an expert witness on the SGA budget; Sullivan challenged her based on statements she made at earlier SGA meetings about the impeachment.

Their final witness was Chantal Lima Barbosa, the 2015-2016 SGA vice president, who testified about the precedent she set during her own administration. Barbosa, who was presented as an expert witness on the SGA constitution, faced several technical questions from Sullivan, Shah and a few members of the judiciary. Some questions challenged her expertise based on the amount of time that has passed since she held the position. Barbosa, who graduated in 2016 as an undergraduate and 2018 as a master’s degree student, currently works in the Student Organization Resource Center.

Since the petitioners have rested their case, the next hearing will focus on the case presented by Sullivan and Shah as well as any witnesses they would like to present and question.

This story will continue to be updated as more information becomes available.