Swim and Dive: Minutemen win 207-86, while Minutewomen fall 173-126 to Fordham to finish off regular season

The culture and environment outshined the racing 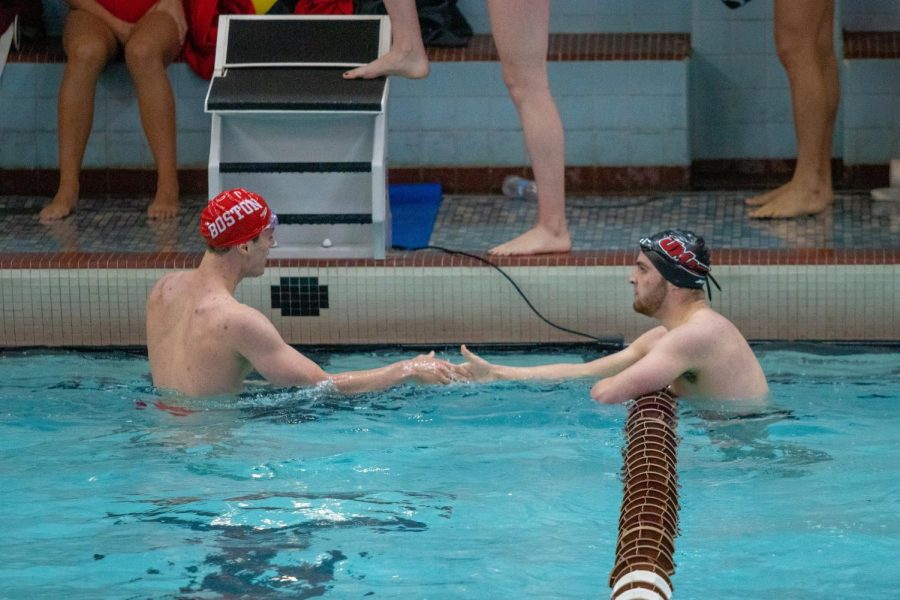 As the Massachusetts swim and dive teams closed out the regular season, the Minutemen were able to come out with a 207-86 win, while the Minutewomen fell to Fordham 173-126.

But if you were to look inside of Boyden Gymnasium Saturday afternoon, all you would have seen was culture.

Both the home and away upper decks were filled with UMass fans, while the lower deck where the pool was had a couple dozen alumni watching on.

To honor the seniors for their last home meet and last regular season meet of their collegiate careers, the afternoon started with arm tunnels made by the rest of the Minutemen (6-1, 1-0 Atlantic 10) and Minutewomen (4-4, 0-2 A-10). Then, the Croatian national anthem played for star diver Maja Boric, the South African anthem for women’s swimmer Chelsea Meiring, and the Greek national anthem for men’s swimmer Panagiotis Androulidakis, in honor of their home countries.

After the meet was over, a few family members of some of the senior swimmers jumped in the pool themselves for the UMass family relay tradition.

“It’s been a while since we’ve been doing this,” women’s coach Bob Newcomb said. “It’s always been a fun event where the parents come down and get in with the kids, it’s a very relaxing way to end off one part of our season and head into the next.”

Although it is a fun event, it also exposes the reality of losing such talent that each team had in their senior class, and having to make sure the team still performs well in years to come.

“This group is great, open, a bunch of leaders and fun,” Newcomb said. “They’re going to be missed in so many different ways, and it’s really hard to say goodbye to a class like this because they’re a special part of what we are.”

From a competition standpoint, neither UMass team will be taking its result to heart, as both stand by what they have been for the entire season, and that is making sure that they are in the best position to do as well as they can in the postseason.

“We were a little up and down,” men’s head coach Russ Yarworth said. “Some kids swam really well, but the most consistent thing around this time of year is inconsistency, and that showed here.”

Even with the loss, Newcomb still feels his team is in the best position to stand by what he’s been preaching all along.

Even in the loss and with the physical state that their bodies are in, some members of the Minutewomen were still able to impress. Sophomore Kelly Malyszka won the 1000-yard freestyle and also finished in second place in the 500-yard freestyle, where she only lost by nine hundredths of a second.

“She is swimming just awesome,” Newcomb said. “She’s just swimming better and better every week. She’s got so much confidence right now and it’s just so much fun to watch what she’s doing.”

“She’s an exceptional talent,” Newcomb said. “I love watching her dive, she is a very pretty diver. She’s so comfortable and elegant, and she’s so relaxed when she’s doing these dives. Going into A10’s, she’ll be fine there, but that’s not where she’s looking, she’s looking for zones, that’s the biggest thing for her, which will help her get back to NCAA’s.”

Now that the regular season is over, both teams will have until Feb. 19 to prepare for the A-10 Championships.