A show of the highest highs and the lowest lows 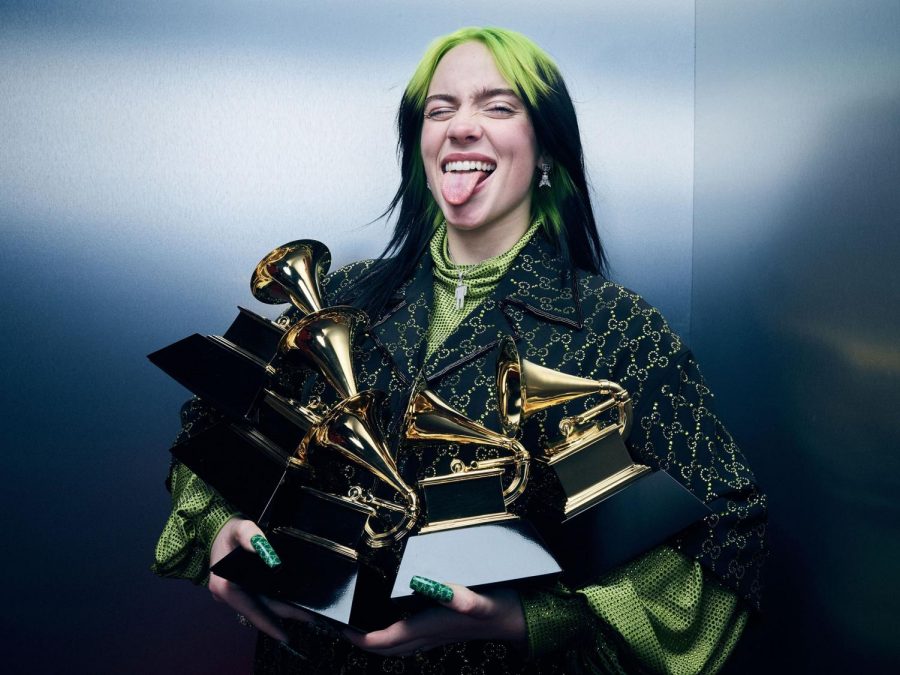 The 62nd Grammy Awards was defined by a somber tone. Given the difficult responsibility of responding to the death of Kobe Bryant, his daughter Gianna and the seven others who died suddenly and tragically the morning of the awards show, host Alicia Keys acted with grace.

She shared her sorrow with everyone by invoking powerful emotions through music with a tribute song to the victims performed with Boyz II Men. Directly abutting Keys’ melancholic opening remarks, Lizzo, who would go on to win Best Pop Solo Performance and Best Urban Contemporary Album, exclaimed “This is for Kobe!” before opening the show with energetic renditions of  “Cuz I Love You” and “Truth Hurts.” Though these two tributes differed in tone they melded together to express grief for the passing along with a celebration of life.

Billie Eilish won a total of five Grammys, including four in the biggest categories: Best New Artist, Album of the Year, Record of the Year and Song of the Year. This historical sweep made Eilish the youngest solo performer ever to win Album of the Year and the second person ever to win in all four major categories in the same year, the first being Christopher Cross in 1981. Eilish gave a humble speech upon accepting her award for Album of the Year, expressing that she thought Ariana Grande deserved the award more than herself. Eilish also performed “When the Party’s Over” with her brother, just one of many well executed ballads at the Grammy Awards this year. Demi Lovato, who is returning to music after a near-death experience in 2018, also gave a powerful and emotional performance.

In total, Camila Cabello, Eilish, Lovato, H.E.R., Tanya Tucker and Keys all opted to perform slower songs, thus perpetuating the mournful tone of the days’ earlier tragedies. Individually, any one of these performances would have been powerful but together,  the predominance of these types of performances dragged down the pace of the show which, by the very nature of awards shows, can extend the already lengthy event.

Regardless of the pacing, the show had many amazing moments. Little Nas X, who went on to win Best Pop Duo for “Old Town Road,” and Ariana Grande both had energetic performances that breathed life back into the show. Tyler the Creator, a newcomer to the Grammy Awards scene, did not water down his raw creative energy for the more mainstream awards show, as he lit the stage on fire during his performance of “Earfquake” and “New Magic Wand.” Tyler the Creator went on to win Best Rap Album for “Igor.” In one of the most genuine and heartwarming moments of the show, he got on stage with his mother to accept his first Grammy, expressing his gratitude for the recognition from an awards show that tends to overlook artists like himself. In his backstage interview, Tyler captured the feeling of the entire awards show; his sentiments were mixed.

“Though the award is an honor,” he said, “it also feels like a ‘backhanded compliment.’”

He bashed the idea of having a Rap or Urban category all together, calling the use of the word Urban “a politically correct way to say the N-word.” These conflicting feelings on the Grammys are in line with other recent controversies surrounding the awards show. Ten days prior to the event, Recording Academy Chief Deborah Dugan was fired amidst allegations of misconduct at a nonprofit that oversees the awards show. Many big-name artists, such as Taylor Swift, Kanye West and Dave Chapelle, who won Best Comedy Album, did not show up to the event at all, unhappy with how the awards show is managed.

In sharp contrast to the great artistic achievements by some shows were the cringe worthy moments by others. Both Aerosmith and Usher had less than exemplary performances. Aerosmith was a technical mess, a drastic variation from the incredibly high-quality Tyler the Creator performance directly before it. However, Aerosmith delivered on its expectations, which were for their performance to be a wild and screaming nostalgia fest. It was somewhat self-aware, though many of its elements did not live up to the standards of their other performances. Usher, on the other hand, did not seem to know that his tribute to Prince would be as awkward as it was. Although Usher attempted to personify the late great Prince, on stage he lacked the legend’s charisma and looked odd and out of place dressed as Prince, trying to recreate his persona without bringing anything new or exciting to the role.

Sophia Larson can be reached at [email protected]