Tre Mitchell’s dominant performance not enough in loss to No. 6 ranked Dayton 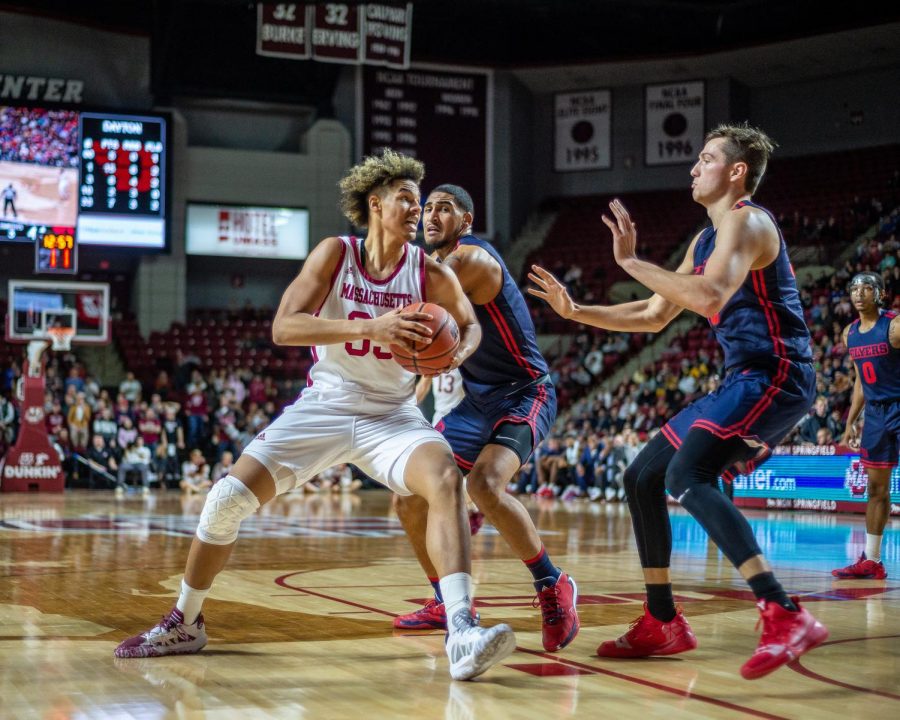 It was once again the Tre Mitchell show on Saturday, yet his 26-point double-double up against the No. 6 team in the country couldn’t save the Massachusetts men’s basketball team from a loss to Dayton.

UMass threw the ball to Mitchell on nearly every possession in the second half, and needed all of his production in the close loss.

“That’s big,” said McCall. “He came off the floor one time and I said, ‘that’s a grown man move.’ To be 19 years old in a game like that and to make some of the moves out there, he doesn’t play like a 19-year-old freshman. Again, that was big, and we still got to get that in every game. In the games that we’ve won, we’ve got that second, that third, fourth scorer, and we got to find that. And Tre will be the first one to tell you that he is happy with 26 points which that’s great, but he wanted to win the game. If he went from 26 points to 16 points and we won, no one would be celebrating more than him.”

Mitchell showed that he can go toe-to-toe with some of the best in college basketball. The freshman was tasked with going up against Obi Toppin, who is a leading candidate for the Naismith College Player of the Year award and is averaging nearly 20 points a game. It was Mitchell’s third double-double of the season for UMass, and it came at an important time. He finished with 26 points, majority of them coming from the paint, but showed that he could stretch the floor going 2-of-5 from deep.

“Mitchell is really, really talented,” Dayton coach Anthony Grant said. “He is really good. He is a difficult guy to match up with and he is a really good passer as well.”

It was Mitchell’s second 25-plus-point performance in the last three games, showing that he can step up to the occasion in those big matinee games. Mitchell finished with 30 in a big night against URI in which UMass narrowly lost on the road, but he proved that he was capable of taking over games down the stretch of the last five minutes.

“For me I didn’t have anything to lose tonight,” Mitchell said. “He’s a [21]-year-old sophomore and I’m a 19-year-old freshman. I think a lot of people are going to take notice of today’s performance, but it’s just another opportunity for me.”

His counterpart on the other end of the floor was Toppin for most of the game, who showed signs as to why he is such a lethal scorer when he has the basketball, but Mitchell outdueled Toppin. The Dayton big man finished with 19 points compared to Mitchell’s 26, but that was due in part to Dayton’s well-balanced scoring sheet which included another 17 points from Jalen Crutcher.

“He is a really good player,” Toppin said of Mitchell. “They give him the ball every single possession, so some are going to go in, some aren’t. We are going to play our regular defense, and if his shots fall in then we have to do a lot better next time.”

The Minutemen now take on Saint Louis in a midweek matchup at the Mullins Center with tip-off set for 7 p.m. on Tuesday.