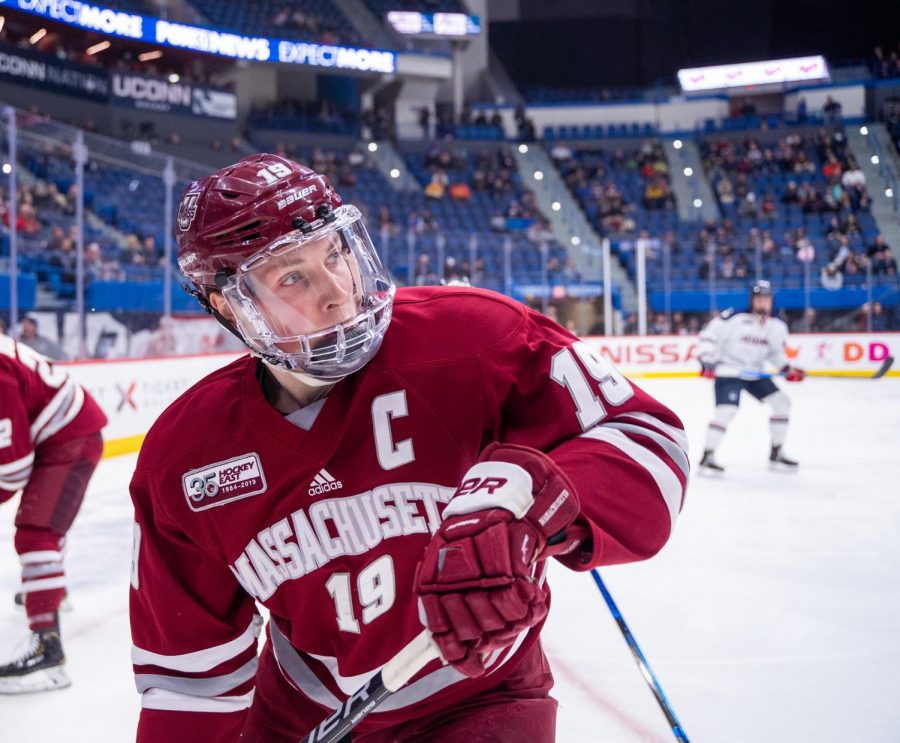 HARTFORD, CT — Holding on to a one-goal lead with under two minutes remaining, the Massachusetts hockey team found a way to let it slip away, eventually falling 3-2 to Connecticut.

“I thought they were the better team,” UMass coach Greg Carvel said, “and we found a way to be ahead late in the game and then completely fell apart with our structure defensively.”

A give-and-go along the wall left Marc Gatcomb with space in front of Minutemen goaltender Filip Lindberg. Gatcomb backhanded a shot to the far post, beating Lindberg and pulling the Huskies even with 1:31 left in the game.

With just over a minute and a half to kill to get the game to overtime, UMass looked as if it had done just that. Then, with under 10 seconds in the game, UConn took a shot from the point that was stopped by Lindberg. However, Zac Jones left the net front open and Huskie forward Kale Howarth swatted at the rebound, knocking it home to deliver the game-winner with 7.6 seconds left.

“Just not being able to stay above the puck and staying on the inside, which it comes down to will a lot of times,” Carvel said. “That’s how you get scored upon, so again, I’m not saying that we deserved to win the game – UConn played well. But we allowed them to steal it back.”

The reason the Minutemen had a chance to steal the game at all was thanks to John Leonard.

With forwards seemingly dropping left and right for UMass — Jeremy Davidson exited midway through the game with injury — Leonard once again delivered for the depleted Minutemen.

“We’re missing Chaffee, we lost Davidson halfway through the game, Lagunov, Kiefiuk, it feels like half our team’s done for the year so we’re digging deep,” Carvel said. “Luckily, we got John Leonard. Scores just about every one of our goals.”

The first of Leonard’s two goals came with UMass down 1-0 thanks to a Carter Berger goal in the second period. Trying to keep the puck in the zone, the junior sent a puck from the blue line in on net. The fluttering puck gave Huskie goaltender Tomas Vomacka trouble as the sophomore was unable to get his glove on it to let UMass tie the game.

Then, tied 1-1 midway through the third period, UMass went to the power play with a chance to take the lead. A little over a minute into the man-advantage, Leonard put the Minutemen ahead 2-1. After controlling the puck in the slot, Leonard snapped a quick wrister putting his team on top.

Apart from Leonard however, UMass struggled to generate dangerous chances. Usually a high-volume shooting team, the Minutemen were outshot 38-23 in the game.

“They’re a big team,” said Carvel of UConn. “They had good puck possession and we didn’t get in on the forecheck very well tonight to create much off the forecheck. Once we got possession the o-zone wasn’t bad, but we didn’t have a lot of o-zone tonight.”

Until the final minute-plus, Lindberg did a good job at shutting down the Huskies. The sophomore goaltender let in a first-period goal, but was lights out for the second and much of the third.

With the Huskies on the power play to start the third period, Lindberg was tested early with a blast from just above the right faceoff circle. Lindberg was equal to the challenge, getting a push across the crease and flashing his glove to deny the UConn bid.

For the already injury-riddled UMass forward corps, an injury to Davidson tested its mettle. The Minutemen were forced to deploy defenseman Kolby Vegara on the wing for a few shifts on the fourth line.

“We’re just out of forwards right now,” Carvel said. “[Vegara] is a great kid. He’ll do whatever you ask him to do and he’ll do it as well as he can.”

After giving away a third-period lead for the third-straight game, UMass will have a chance to reset with another matchup against the Huskies on Saturday night in Amherst.

“It would’ve been stealing a game tonight, but it’s a tough way to lose late in the game,” Carvel said. “We’ve been a good third period team most of the year and that’s two games now in the last two weekends where we’ve stranded leads in the third periods so shame on us.”