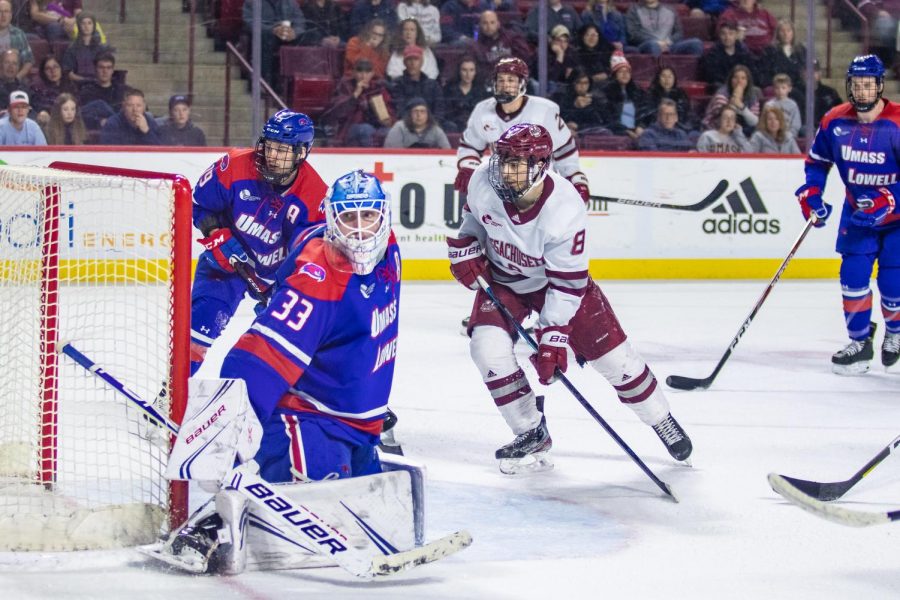 It’s a tale as old as time.

John Leonard started in the neutral zone, completely deked out a helpless defender, went in on the goalie and put it right over his glove, saving the Massachusetts hockey team once again.

Just insert the name of the defenseman – Merek Korencik – and the goaltender – Tyler Wall — and it’s the same story with different characters.

“John’s an incredible player,” Jake Gaudet said of his teammate. “It’s fun to watch. He’s been scoring goals like that all year.”

Prior to Leonard’s beauty, the game was knotted up 3-3 with UML jumping out to the early lead, UMass exploding for three goals in the second and the River Hawks tying it in the third.

Roughly halfway into the first period, Chase Blackmun ripped a shot from the point past Matt Murray to put UML up 1-0.

After the first intermission, the Minutemen found the skill they’d been missing of late: the ability to finish.

The Minutemen’s outpour of goals began in an unlikely place when Jake McLaughlin’s wrist shot had eyes from the blue line and slipped past Wall’s glove to tie the game up at one roughly seven minutes into the second stanza.

And then just 13 seconds later, Niko Hildenbrand forced a River Hawk defender to turn the puck over, allowing Leonard to get an uncontested shot on Wall. The UML goalie turned the first shot aside, but Leonard put home the rebound to give UMass the 2-1 lead.

Leonard scoring is nothing new for the Minutemen. But with the secondary scoring struggles over the past few games, it’s been a luxury for UMass to have Leonard’s consistency.

“I just think he’s feeling it,” Greg Carvel said. “He wants the puck and when he gets the puck on his stick, he’s the fastest guy in college hockey. It’s crazy how fast he moves.”

Later in the period, the Minutemen were in the midst of sustained attacking zone time. Zac Jones threw one towards the net, it bounced up and landed on Gaudet’s stick. Gaudet got it on net and with Wall on his back, Reed Lebster stuffed the puck into the net to make it 3-1.

The River Hawks answered in the third period, however, when they capitalized on the power play less than two minutes into the final 20. Jon McDonald beat Matt Murray right over his glove to cut the lead to 3-2.

Then came the real backbreaker for UMass.

A few moments after UML pulled within one, Colin O’Neill slipped one underneath Murray’s pad, tying the game and highlighting a big theme over UMass’ weekend series with UML.

“Our goaltending this weekend was not to standard,” Carvel said. “It’s that simple. I’m not going to tip toe around it. The team in front of our goalies played extremely hard this weekend and the goalies for whatever reason they’ve been outstanding all year and this weekend their standard wasn’t good enough.”

Despite the dire moments of watching a 3-1 lead slip away, the Minutemen didn’t feel any cause for concern.

“I thought we’d been playing a pretty solid game,” Gaudet said. “It’s unfortunate that goal goes in and they tie it up. But I think we got a really strong team here, so we didn’t hit the panic button too hard. We just got to keep playing the way we are and we’ll figure it out.”

After Leonard’s highlight reel game-winner, he created another highlight when he dove for a loose puck and slapped it into the UML empty net to extend the lead to 5-3.

The empty-netter completed the hat trick and put his 24 goals at the top of college hockey in that category. It was also his second hat trick in three games.

“I don’t know what that was,” Leonard said of his empty-netter. “That was pure luck.”

“We needed a real good effort tonight,” Carvel said. “We needed to win in Hockey East. We needed to find a way to be bold.”

The Minutemen got that good effort, won a game in Hockey East and going off of Leonard’s highlight reel goals, they were certainly bold.