UMass hockey focused on attention to details heading into No. 10 Providence series

Greg Carvel: ‘It’s on me that I’ve let this slip for whatever reason’ 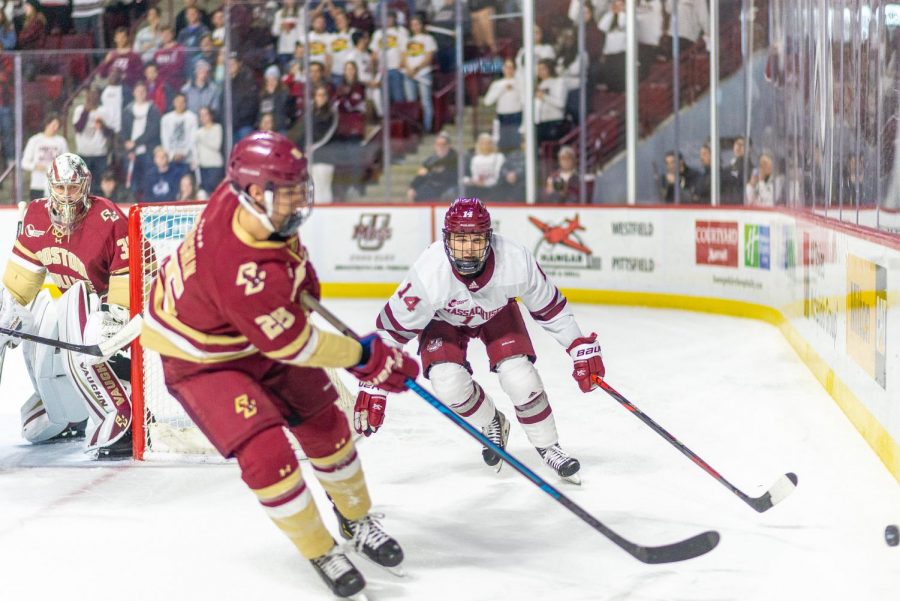 The Massachusetts hockey team didn’t get the result it was looking for in Friday’s shutout loss.

That may seem obvious based on the 3-0 final, but it’s more so how they lost that’s troubling them.

In the biggest game of the year, the Minutemen (16-9-2, 9-6-2 Hockey East) failed to get the job done. They did so by not playing up to their standard. At times, it was the effort that wasn’t there and at other points, it was a lack of attention to the details that ultimately sang their demise.

In the end, Boston College battled harder, and approaching the playoffs, that’s what matters most.

With its third-straight defeat on home ice, No. 8 UMass lost control of first place in Hockey East. In a slump with only seven games left, the team is working overtime to address its central flaws.

“Honestly, I never care about standings, polls, records – anything” head coach Greg Carvel said. “Just really concerned about getting us playing to a standard that we’re happy with. If it’s where we think it should be then usually, we’ll find ways to win, but it’s on me that I’ve let this slip for whatever reason, and after the BC game, after watching the video, it became really clear what the issues were.”

“We’re trying to make them realize the standard’s not been good enough and we’re not going to use the excuse that we’ve played better teams this half, we should be winning more than we are.”

After being shutout for the second time in a week and only having one goal scored in their last three games, the Minutemen are focused on not getting frustrated and going back to the basics: tight checking, good compete and commitment to focusing on the details.

“I feel like this week we’ve done a nice job of resetting and focusing on the things that will make us better,” Mitchell Chaffee said. “And especially our commitment level. This time of the year it comes down to details and we need to be better. That’s a big part of our game we can clean up.”

For Carvel, who said he’s feeling ‘more anger’ than frustration at this point, the issues are very clear.

“Anger’s not a good emotion,” he said. “But we’re trying to use that energy in a positive manner.”

“It’s just all attention to details, being committed to playing to our standard and executing. We’ve had two good days of discussions with the guys, two good days of practice. Shaking things up a bit, but the message is very clear. As I said after the BC game, this is when coaches really have to earn their money. It’s when you give the kids answers – you be demanding, give them the answers and then support them and help them to get to the right level.”

Knowing what the issues are is encouraging, the fourth-year coach added after Tuesday’s practice.

“It’d be scary if we didn’t know,” Carvel said. “But we feel we know why, and it’s a good group of kids and usually wherever we try to lead them, then they’ll follow.”

Taking on the 10th-ranked Friars (14-7-5, 8-6-2 HEA) in a home-and-home set, the Minutemen will be put to the test once again against the top-ranked power play in the conference.

With elite scores like the nation’s points leader, Jack Dugan, and his offensive counterpart, Tyce Thompson, among a handful of other emerging weapons up front, Providence has a lethal attack.

Much like the BC game that marked a breaking point, this weekend poses another crucial test for UMass, and it’ll be like that the rest of the way; every point down the stretch matters immensely.

Puck drop is set for 7 p.m. on Friday night at the Mullins Center and Saturday at Schneider Arena.