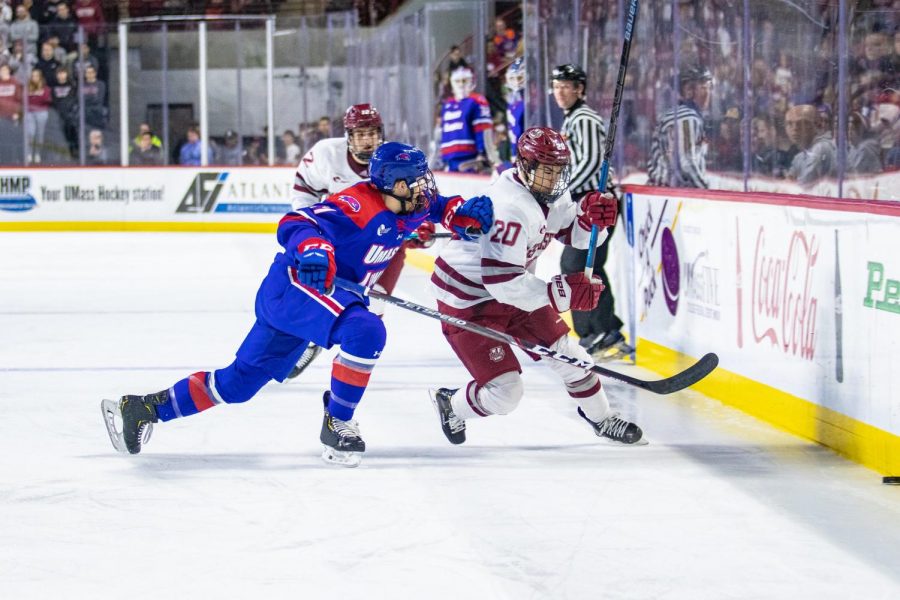 Greg Carvel’s frustration was at an all-time high on Friday night; a tangible anger filled the air.

The Massachusetts hockey team had just blown a third-period lead and lost in the final minute.

On Saturday, they let a third-period lead slip away once again – but this time with a much different result. After UMass Lowell scored two quick goals to knot it up at three-all, No. 8 UMass pulled ahead by one and closed it out, thanks to John Leonard’s second hat trick in his last three games.

“I thought we played pretty well last night, maybe good enough to win, so that was frustrating,” Carvel said Saturday after UMass’ 5-3 win. “But, I’m really happy about the outcome tonight.”

With the win, the Minutemen improve to 11-2-0 on the season when leading after two periods.

“That’s adversity,” he added, “when you blow a two-goal lead, to come back and play that way; of course Johnny Leonard elevates, the power play looks like a really good power play, the kids played hard, the energy was good, and the belief was there. It wasn’t a case of, you feel this drop in the bench – you felt the bench get upset, it’s like, ‘it’s not right, we’re winning this game.’”

While the media got a glimpse at Carvel’s anger following the last-second defeat and lapse of focus on Friday, rest assured the players did as well, and on Saturday they responded as such.

In as close as you can get to a must-win game in the regular season, it took a period for UMass to get moving, but once it did, it exploded with three goals in the span of 3:13 in the second period.

Holding a 3-1 lead entering the third period, the Minutemen allowed a goal less than 30 seconds into the final frame. Eight minutes later, the River Hawks (16-10-5, 10-7-4 HEA) scored their second of the period, tying it up; setting up for what appeared to be another comeback victory.

But, unlike the previous, when it got away from its standard when Lowell stormed back, UMass didn’t shy away this time and played like the team that’s been a third period juggernaut all year.

Even more so, they did it shorthanded – in the absence of Mitchell Chaffee for a second straight game, as well as Cal Kiefiuk and Philip Lagunov, who are sidelined for the rest of the season.

“Good signs,” Carvel said. “Especially when we lost Chaffee, we’ve lost Lagunov, we’ve lost Kiefiuk – the bench is a little light right now with experience and I thought it was a character win. The kids competed hard, followed the game plan. Lowell’s a good defensive team with a good goalie and we put 50 shots up on them.”

Regardless of the positive response to the blown lead, it’s a dangerous precedent to set. Even after his second hat trick in three games, Leonard harped on the importance of closing strong.

“I think we’re all very happy with the result,” he said, “but it’s been said in the locker room many times: that can’t happen and moving forward and going down the stretch here teams are going to be able to close out games. We can’t afford to be giving up those leads going into the third, especially on the road. That’s a tough place to play in, we got a lead going into the third in that building and we have to play the right way and play smart. We didn’t do that last night.”

One way or another, UMass got the win and moves into sole possession of second place in Hockey East, and with only three games to play, things are about to pick up in a major way.