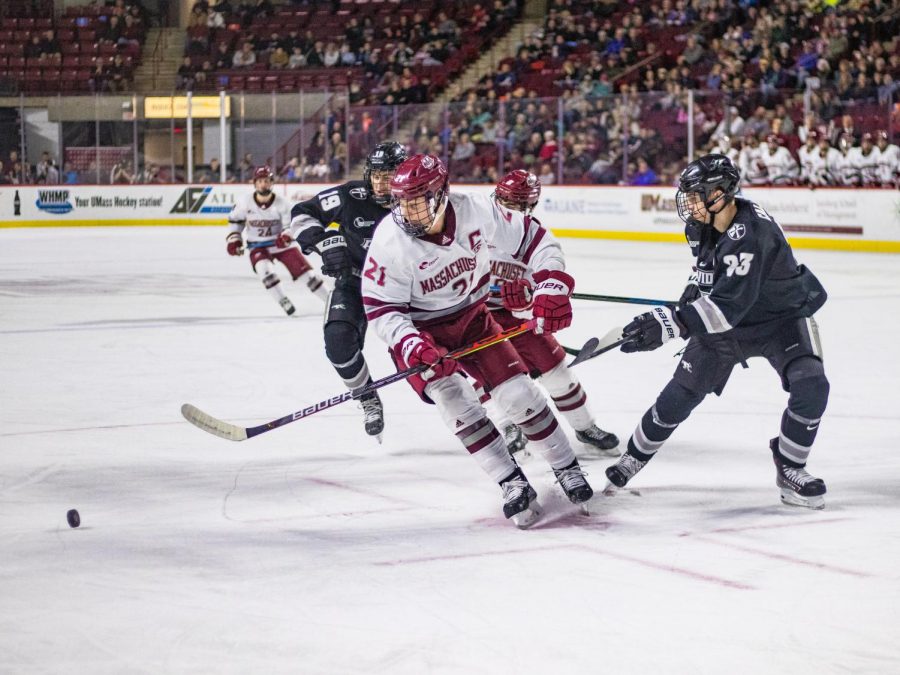 After outplaying Providence for much of the first two periods of Friday night’s game, the Massachusetts hockey team — as it often has this season — used a multi-goal third period to top the Friars 3-1.

“I thought [UMass] won about every part of the game tonight,” Providence coach Nate Leaman said.

With the scoreboard reading 1-1 heading into the third period, Niko Hildenbrand deflected a Zac Jones shot to give UMass the lead with 16:37 left in the game. A little over two minutes later Hildenbrand added a second and gave the Minutemen a two-goal lead they wouldn’t look back from.

“I went directly in there,” UMass coach Greg Carvel said of his message to the team after the second period, “and I said, ‘There’s no way we’re losing this game. You guys are playing too well, you deserve it. We’ll find a way.’”

UMass first broke through on the score sheet with 14:28 left in the first period. After keeping a puck in the offensive zone, Matthew Kessel sent a weak wrist shot toward the net. Center Anthony Del Gaizo redirected the slow-moving shot across the crease to a waiting Reed Lebster who put the puck in the back of the wide-open net for a 1-0 lead.

“We needed Cal [Kiefiuk] and Lebster—they had a lot of points in the first half, they’ve gone quiet on us,” Carvel said. “To get them scoring again is really important.”

About a period and a half later, Matt Koopman entered the offensive zone with the puck. Koopman, skating with speed, beat UMass defenseman Ty Farmer and with a bad angle, squeezed a shot between Minuteman goaltender Filip Lindberg’s back and the near post, and into the back of the net to tie the game.

The only reason the Friars were in a position to tie the game at that point had been the play of netminder Michael Lackey. Through two periods Lackey had seen 31 shots, stopping 30 of the them.

Lackey finished the night having faced 36, making saves on 33 of them.

With around 14 minutes remaining in the second frame, the Minutemen found themselves on a two-on-one rush and teed up a Jack Suter one-timer from close range only for Lackey to come across the crease to stop the shot. Later in the same shift, Lackey went to play the puck behind the net and found himself out of position when UMass created a turnover. The graduate senior got back in net, making one stop and then fell to his back in front of the crease to make two more saves keeping the score 1-0.

In the Minuteman net, Lindberg saw just 15 shots, making 14 saves, the biggest of which were a series of stops on a Providence power play midway through the second period.

The Friars came into the game with the third-best power play unit in the country, scoring on 27.6 percent of their chances. On Friday, UMass limited Providence to just two power plays, holding them scoreless on both occasions thanks to Lindberg.

“That’s as good a power play as I’ve seen,” Carvel said, “That’s a really effective power play. They move the puck around extremely well, so we got a little fortunate tonight.”

“Boy did they do a job tonight,” Carvel said. “That’s as solid a game we’ve played in this building, probably since I’ve been here.”

The teams head to Providence tomorrow with the Friars hoping for a split. Puck drop is set for 7 p.m. from

“I think it’s even more important tomorrow night than it was tonight,” Hildenbrand said of the importance of starting with intensity on Saturday. “We know that they’re very comfortable in their rink. It’s going to be smaller, tighter; it’s going to be a faster game and we just have to dial it in even more.”