UMass looking to break through VCU’s press in matchup Wednesday

Ball movement will be crucial to overcome VCU 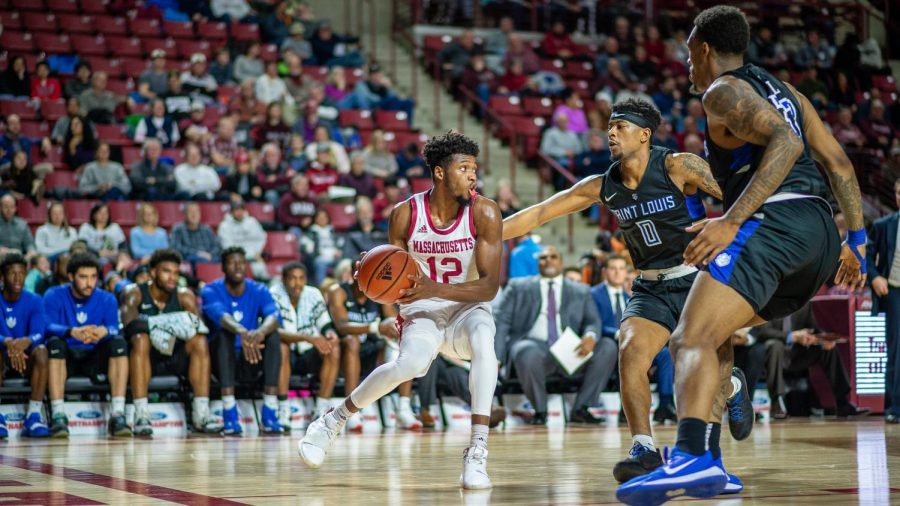 The Massachusetts men’s basketball team will certainly have its skills and strength put to the test when it squares off against Virginia Commonwealth on Wednesday in a matchup of two teams looking to move up in the Atlantic 10.

UMass will largely be tested whether it can get the ball across half-court, considering the pressure VCU will be putting on them. VCU is known for its defense, and it will surely test the Minutemen under pressure with constant traps and forceful stops.

“The one thing I will say is that because we press, and it is a little bit different, but we work on breaking pressure every day in practice,” UMass coach Matt McCall said. “[Marcus] Santos-Silva inside their diamond press, their man-to-man, you don’t know who is coming to run and jump, you can’t leave each other on islands. You have to be ready to flash back to the ball and help the handlers and initiate and get into offense. There is a lot of challenges out there on the floor.”

The ball handlers will be key for the Minutemen on Wednesday, specifically the two point guards, Kolton Mitchell and Sean East. The Rams run a “Havoc” full court press which pressures the offense into errant passes. The focal point of the press that VCU comes from is a diamond formation where the two defenders on the inbounds pass pressure the guards getting the ball to either the corner or the sidelines which then forces the ball handler to face his back to the court and creates a lot of miscommunication. The key to breaking the press is either cutting through the defenders or quick inbounds passes that will cut right through the press.

East and Mitchell both have the ability to facilitate the offense with the ball on the court, but it will be crucial for both guards to start the offense quickly without turning the ball over, something McCall has highlighted throughout the season in regard to the high amount of turnovers UMass commits at times.

“[VCU’s pressure] is a pretty big focus,” Carl Pierre said. “We know they like to get after teams and pressure and deny all of that. We did prepare to deal with that, but I think being that we press, and we press each other in practice that helps us too.”

Pierre will be an instrumental factor in the contest against the Rams. If UMass can get the offense rolling quickly out of made baskets from VCU, then Pierre or Preston Santos will be the scoring options available to Mitchell or East. The junior has dropped down from averaging 14.5 points per game to 12.7, and over his last eight games he is averaging 20 percent from beyond the arc, a mark that is well below his season average.

Diallo has put up double digits in two of the last three games, including one against Dayton. Diallo will be important in helping break the press, letting the offense flow over into half court and transitioning the ball through East or Mitchell.

UMass will have its hands full when VCU comes to the Mullins Center. Wednesday’s tip-off is scheduled for 7 p.m.