UMass looks to continue its offensive prowess against Ohio State

After scoring 21 goals last weekend, UMass hopes to pick up where they left off offensively 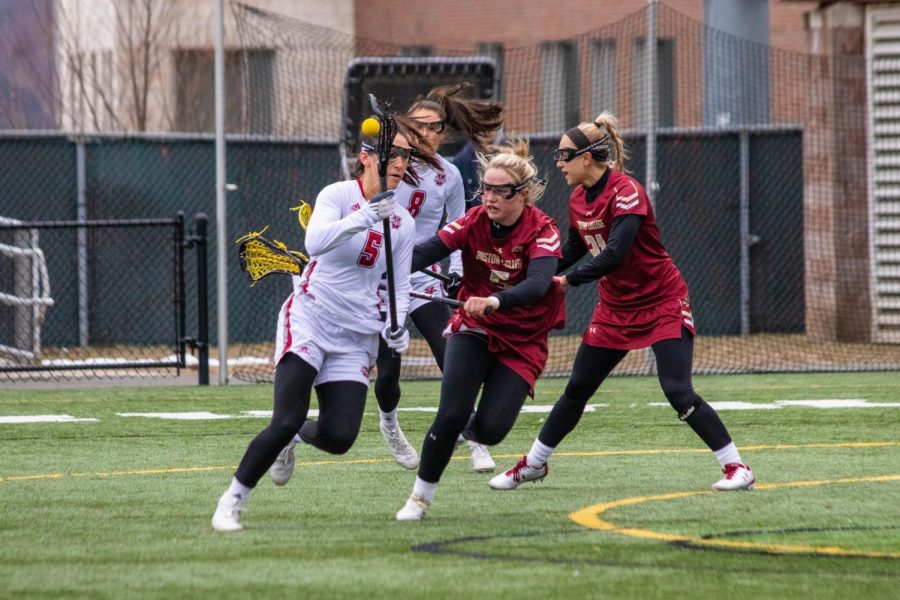 The Massachusetts women’s lacrosse team has played dominant offensively all season despite a tough loss to nationally ranked Dartmouth a few weeks ago. Led by Haley Connaughton, who has scored four goals in each of the Minutewomen’s three games, UMass has had its fair share of goals, scoring 21 in their last contest against UMass Lowell.

This weekend, the Minutewomen (2-1) will travel to Milton, Georgia, where UMass will play Big Ten opponent, Ohio State. The Buckeyes (4-2) are known to have an aggressive playstyle on the field. Minutewomen head coach Angela McMahon looks to combat that in a similar manner, while sticking to her offense-heavy gameplan.

“It’s just being aggressive to their aggression,” McMahon said. “Anytime a defense is overly aggressive there are always weak points. For us it’s just using our lacrosse IQ that we’ve been developing and executing on the flip side of that.”

UMass has done a very good job executing on their shots, scoring just over 50 percent of the total shots they take. Not only have the attackers been producing goals for the Minutewomen, but star senior Stephanie Croke has already scored eight goals on the season as a midfielder.

A big message McMahon has expressed to her team this season is to play with confidence, selflessness and as a team; taking big chances whenever they arise. Croke carries that same mindset, and hopes it continues for her and her teammates this upcoming weekend.

“We need to prepare well in practice,” Croke said. “Staying organized and playing how we usually do. I think with confidence and playing together we’ll be able to do really well.”

The Minutewomen have a lot of talent and promise from many of their younger players. With 39 players on their roster, UMass only has three seniors leading their side. Despite losing many seniors last season, a young team playing so well only three games into the season, means the team sees a great deal of promise for the future of the program.

“I think we’re a completely different team than last season,” UMass attacker Emma Dotsikas said. “I think the more we practice and play together, the better chemistry we can build and perform on the field.”

Even with only three games under their belt, the Minutewomen have been noticeably improving—especially on the offensive side of the ball. McMahon credits her side for playing more together as a unit as of late, rather than being led by a few breakout performances.

“In our last game in particular we had so many assisted goals,” McMahon said. “Over the course of these few games we’ve had so many different people stepping up and contributing. That’s exactly what our goal is offensively; having seven weapons out there at all times, with the ability to score, feed and recognize what we do off the ball.”

UMass will look to continue its strong offensive play against Ohio State on Sunday at noon in Milton, Georgia.