UMass men’s basketball gets crushed on the road by Richmond 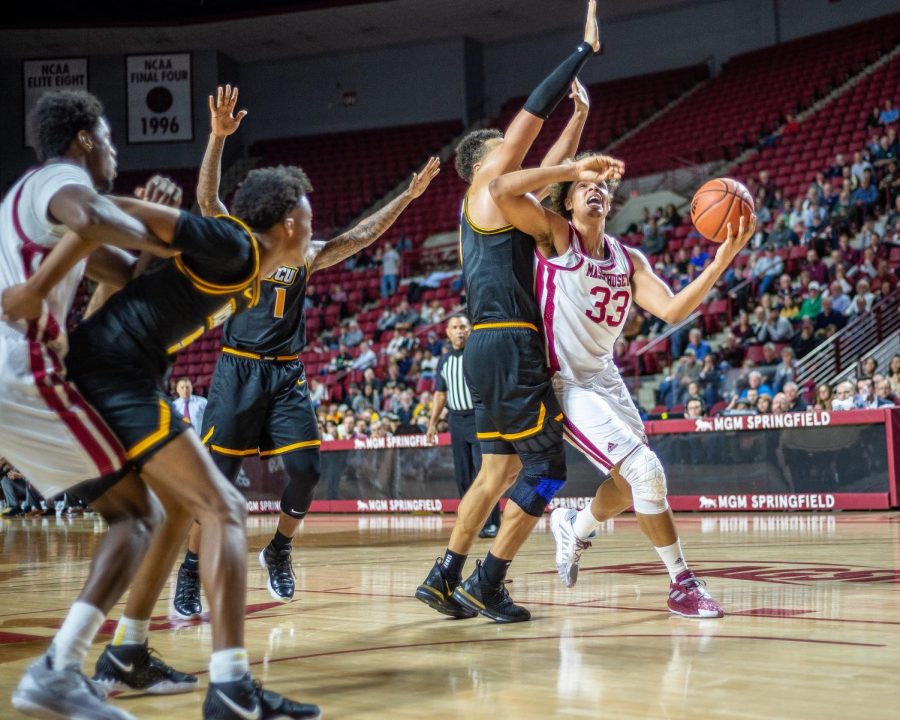 The Massachusetts men’s basketball team showed a completely different side against Richmond compared to its recent three-game winning streak that included two huge wins over VCU and Saint Louis.

“I told our team at the half that we were satisfied with seven wins in the league,” UMass coach Matt McCall said. “I thought we were satisfied with seven wins in the league and that we didn’t show up. The ball didn’t go in the net early on, and I think it affected our effort on defense. We just looked in a fog at times, and we struggle with teams that run offenses as well as they run offense and as hard as they move the floor. I want to say I don’t think that had much to do with it, I just thought that we didn’t show up the way we needed to show up and compete. All we’ve done is talk about effort, effort, effort, and our effort was not there in the first 20 minutes. Showed a little fight and resistance down the stretch, but disappointing with obviously so much on the line right now for us.”

It was quiet start for likely A-10 Rookie of the Year Tre Mitchell, who only finished with four points in the half and shot 2-of-10 from the field. Alongside Mitchell was Carl Pierre, who struggled to get going shooting the ball and went 0-of-4 from the field. Mitchell did get going in the second half and went to work down low in the paint to tack on some more points to his low shooting performance from the first half. When all was said and done, the freshman finished with 18 points.

For their opponent, Richmond relied on the dominant play of Grant Golden, who matched up with Mitchell down low in the post for the majority of the game. Golden finished with 13 points in the first half, and while the Minutemen shut him out after halftime, it was his 13 points that sparked the Spiders to multiple runs, including a stretch where they went on a 14-0 run to pull away from the Minutemen. The Spiders shot 55.2 percent from the field along with 41.7 percent from deep.

“We weren’t doing anything well on offense,” McCall said. “We missed a lot of layups, we missed a lot of shots inside, and we threw it to the other team probably six or seven times on inbounds passes. I have never seen that twice in the game, throw it twice to the other team on the inbounds pass just like we did. We talked last couple of days how they like to break on those type of passes and gamble for steals. Disappointing, not a great effort for us tonight, obviously not one of our best showings, and just the effort level wasn’t there that that’s what has got me frustrated.”

Dibaji Walker was the leading scorer for the Minutemen as the transfer sophomore had 19 points, but only three came from the first half. Walker got into a groove late into the second half when the game was well out of hand, but still finished shooting 7-of-13 from the field.

UMass will head to La Salle for an away contest Wednesday night with tip off scheduled for 7 p.m.