Walker, Santos and Mitchell key in upcoming contest with Davidson 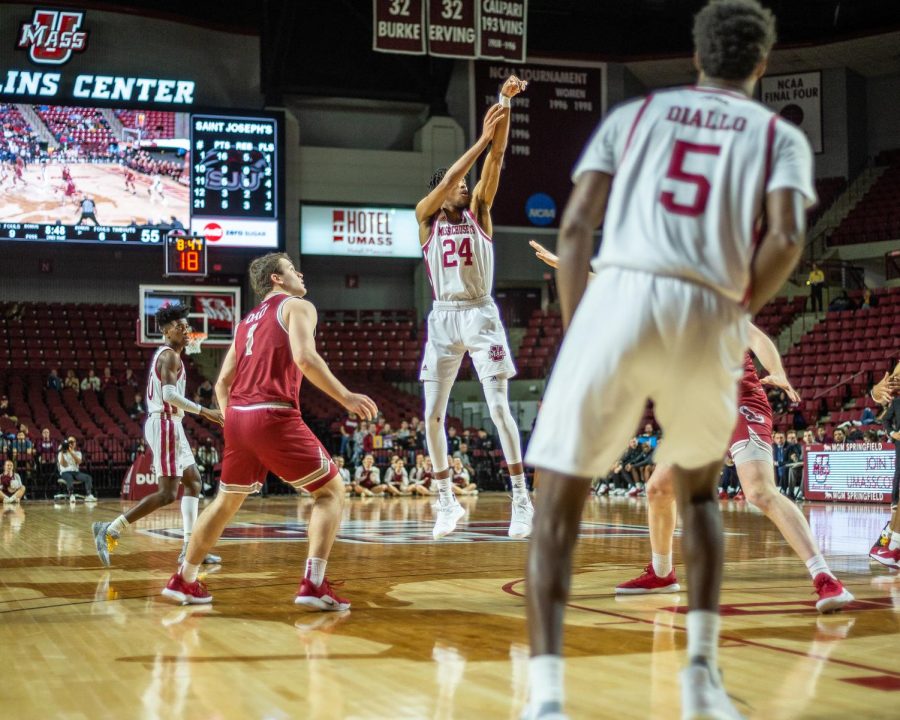 This next slate of games is the stretch of basketball that will put the Massachusetts men’s basketball team to the test of whether it is poised enough to rewrite the curse of not being able to win on the road. That challenge starts with its contest against Davidson (10-10, 4-4 Atlantic 10) Saturday.

The Minutemen (9-12, 3-5 A-10) are facing a slew of games that will battle test them to the limit. The handful of games that they have ahead of them are against the likes of Dayton, which is currently ranked No. 7 in the nation, Rhode Island who are having a stellar year in the Atlantic 10, and Saint Louis who they narrowly lost to on the road. UMass coach Matt McCall is confident in his team to right the ship on their recent struggles on the road.

“You have got to be extremely tough,” McCall said on the challenges of playing on the road. “You got to have mental toughness… you got to have that mental toughness that when they make a run and their crowd gets behind them you respond the right way. That’s the biggest thing, we haven’t responded the right way, and you got to get off to good starts. Getting off to a good start on the road is really, really important.”

In order for the Minutemen to be successful on the road they need a number of key things to build off of in the game. All of their scoring starts in the hands of two of their top scorers on the team and in the league, and those two players are Tre Mitchell and Carl Pierre. Mitchell and Pierre have been fundamental in the success of UMass in their recent stretch of play. Mitchell is averaging 15.6 points per game, while Pierre is averaging exactly 14 points a game. Mitchell has had the ability when double-teamed down in the post to find the open man, whether that be Pierre for three or someone else cutting down in the lane for the layup.

Along with Pierre and Mitchell, Sean East and Kolton Mitchell have been splitting time at point guard of late to accentuate their strengths. K. Mitchell has been a menace on defense, while East has been able to facilitate the ball through the offense to kick start the scoring. McCall has been relying on both guards to help the offense.

“I think Kolton has earned the right to play because of how hard he plays,” McCall said. “There may be a game we have them both [K. Mitchell and East] out there together. Two handlers, two decision makers out there. There may be a game that Sean is playing really well, and he plays 25 minutes and Kolton plays 15, or flip that, you don’t know how the game dictates. They both deserve to play. They split time yesterday [Wednesday against St. Joe’s] and we had a lot of success.”

Mitchell hasn’t made the impact on the scoring sheet that one like Mitchell and Pierre have made, but it is the hustle and tenacity that he plays with that makes him such a key player for the Minutemen.

“We need one of them [a win], and once we get the one then I think we will be rolling,” K. Mitchell said. “Right now, our confidence is at an all-time high, a huge win against Duquesne, and St. Joe’s we were expected to win but I think we put it on them. A win is a win, it’s conference play.”

The recent sensational play of Preston Santos and Dibaji Walker has been crucial for the Minutemen, who have been looking for additional scorers to help aid the play of Pierre and T. Mitchell. Walker is coming off of a season high 22 points in the win against St. Joe’s, while Santos has continued his strong play over the last few games. Santos has the ability to be a threat offensively, but his talent onthe defense and offensive glass is what has made him to be great for UMass. Walker is getting accustomed into the system of UMass after sitting out for almost half of the season due to his waiver as a transfer and because of the limited minutes he played in his first couple games. The triple threat of Pierre, T. Mitchell, and Walker consistently being able to score 20-plus points is one that has the potential to be very intimidating for opposing teams.

Tip-off between UMass and Davidson is scheduled for 8 p.m. Saturday at John M. Belk Arena.