UMass men’s basketball looking to upset No. 6 Dayton at home

Santos and Pierre key factors in contest against Dayton 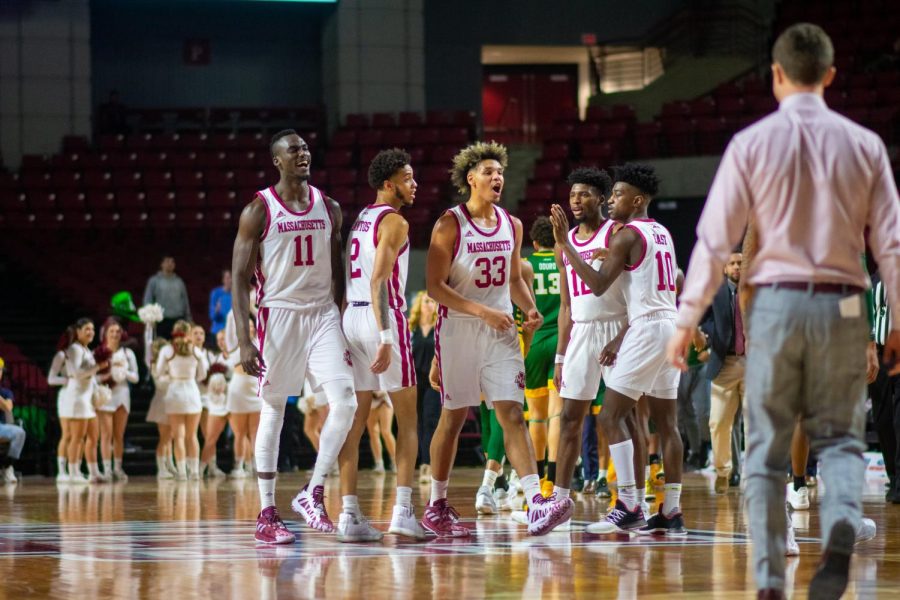 To put it mildly, the Massachusetts men’s basketball team face their toughest challenge of the season come Saturday when they square off against Dayton.

UMass (10-14, 4-7 Atlantic 10) are heading into a stretch of play where it will be going up against some of the toughest teams in its conference. The stretch of difficult opponents starts with a mid-day contest against one of the best teams in the country.

The Flyers (22-2, 11-0 A-10) come into Amherst ranked sixth in the country and UMass coach Matt McCall is well aware of the hype surrounding them.

“A team like this that has as much talent, we aren’t just doing to line up toe-to-toe we’re going to have to try to keep them guessing and use different lineups,” McCall said. “We have to attack them that way. We had some success with that [Djery Baptiste and Tre Mitchell] lineup versus Rhode Island, had some success with George Mason to change defenses to keep them off balance, and that’s again what we will have to do on Saturday.”

For the first time since 2017, when URI was ranked No. 22 in the country, the Minutemen are welcoming a ranked opponent to town. Dayton is the highest-ranked opponent to come to town since February of 2004 when they hosted No. 2 Saint Joseph’s.

UMass took on Dayton earlier in the season when it handily lost by nearly thirty points away on the road. This time the environment is different, and players have the comfort of playing such a big game like this at home.

“It’s going to help a lot,” said Carl Pierre. “It’s a comfort thing [playing at home]. You know the rims, you know the crowd and I think it’ll help.”

Pierre has struggled as of late to get off to a good start in the last few games for UMass, and that has largely been in part to teams locking him down around the perimeter. Pierre is a lethal scorer from beyond the arc once he gets going, but for in the last couple of weeks, Pierre has yet to see many shots go down in the first half. In the Minutemen’s last game against George Mason, Pierre only shot 2-of-12 from the field and couldn’t manage to knock down a three either. In Saturday’s game against Dayton, UMass needs to be firing on all cylinders if they want to stay in the game, and Pierre is a huge factor in that.

A player who has stepped up and taken on a role of his own as of late is Preston Santos. The freshman has contributed in huge ways over the last few games, especially in UMass’ last matchup against George Mason, where Santos was the leading scorer and made a huge defensive play at the end to seal the game. Santos has been effective from beyond the arc as a capable 3-point shooter and has shown signs of a mid-range game as well. Aside from his shooting, Santos is a dominant force down in the paint, where he shows off his quick reflexes to crash the boards and the get put back or his ability to drive through the lane.

“He’s been great,” McCall said. “Coach Bergeron has always said just how good of an offensive player he is. It’s one of the things that drew me to him in this gym. He came to an elite camp [here at UMass] and I thought his potential was through the roof. I didn’t just look at him as a defensive player, offensively he had an unorthodox shot, but it went in…. His offense has evolved. He’s got some steals and some run-out dunks, again putting his focus defensively has helped him, and then flying to the offensive glass. He’s rebounding at a high clip too.”

Dayton leads the A-10 in scoring overall, averaging 81.6 points per game thanks in part to Obi Toppin, who is one of the leading candidates for the Naismith College Player of the Year award, Jalen Crutcher, Ibi Watson, and Trey Landers. All four players are averaging double-digits in scoring. Toppin is third in the conference in scoring, and his team as a whole are averaging 36.7 percent from three-point range, which is best in the A-10.

The Minutemen certainly have their hands full on Saturday. Tip-off is scheduled for 12:30 p.m. at the Mullins Center.