Minutemen forced 21 turnovers in the win 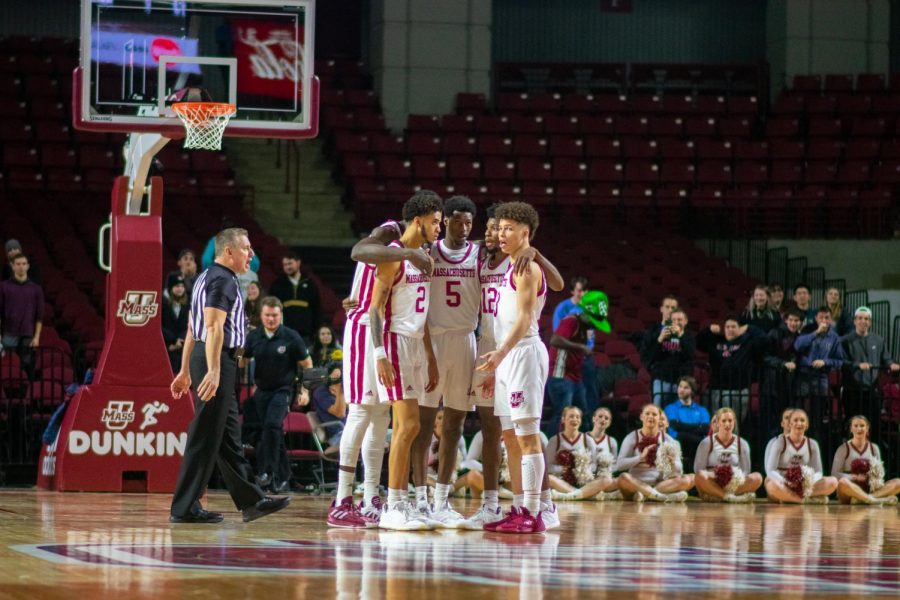 The Massachusetts men’s basketball team has built up a habit of getting substantial leads and then blowing the game late. Against George Mason on Sunday, it looked like it might happen again.

“Good win,” McCall said. “These games with Mason always seem to come down to the wire. For the first time in three years, it’s great to be on the positive end of that wire.”

It was at that point that McCall subbed out all five of his starters. McCall wanted to send a message to his players.

“We’re not budging on the standard of effort,” McCall said. “We didn’t give great effort to start the game and that’s ultimately how we took the lead in the first half, was our effort. Just playing hard. It’s got to be that way every day.”

At one point in the first half, the Minutemen trailed 20-10. They then went on a 15-0 run over a four-minute stretch to give themselves a comfortable lead. The Patriots made that lead uncomfortable by trading buckets with them and eventually gaining it back, but a Sean East layup right as the half expired tied the game up at 35 apiece.

At halftime, East led all scorers with 12 points and the momentum was swinging in favor of UMass.

In the second half, the Minutemen came out swinging. The defense continued to force turnovers and the transition offense by the Minutemen was on point. Freshman Preston Santos was able to get a pair of fast break dunks and a tip-in from transition plays.

The defense alternated between zone and man-to-man the entire game and the switches threw off the George Mason offense all afternoon.

“We were concerned about Javon Greene living in the lane, so we played zone,” McCall said. “Then we just changed, went man, pressed and forced them into 21 turnovers.”

Santos came up big on both ends in the second half for UMass. His efforts around the basket and his back-to-back 3-pointers, the only two the Minutemen made all game, were the catalyst behind a UMass lead that extended to as much as 14 points with 5:21 remaining.

From there, however, the Patriots rallied.

On many occasions this season, UMass has been up deep into the second half and then blown the game completely. It happened against Yale, South Carolina and Saint Louis. This time, the 14-point lead disappeared into a tie game within four minutes.

The foul and free throw game ensued, but with George Mason down two and having possession with 20 seconds left in the game, Santos put his stamp on another strong performance. Xavier Johnson drove into the lane and his layup attempt was blocked and corralled by Santos, who was fouled.

Santos did miss the one free throw, but a missed three by Greene that went out of bounds off of UMass and a prayer of a three-pointer that went wide as time expired secured the win for UMass.

“I think it’s just our mindset because there’s been so many times that we’ve blown a lead and then we just keep letting them go on their run,” Tre Mitchell said. “We bounced back today. Whatever happened, we had an answer for it. They went on their little run, and we went into our little huddle and were like, ‘we’ve been doing this all year. It’s time to step up and not let this happen no more.’ So it was just good we got that win.”