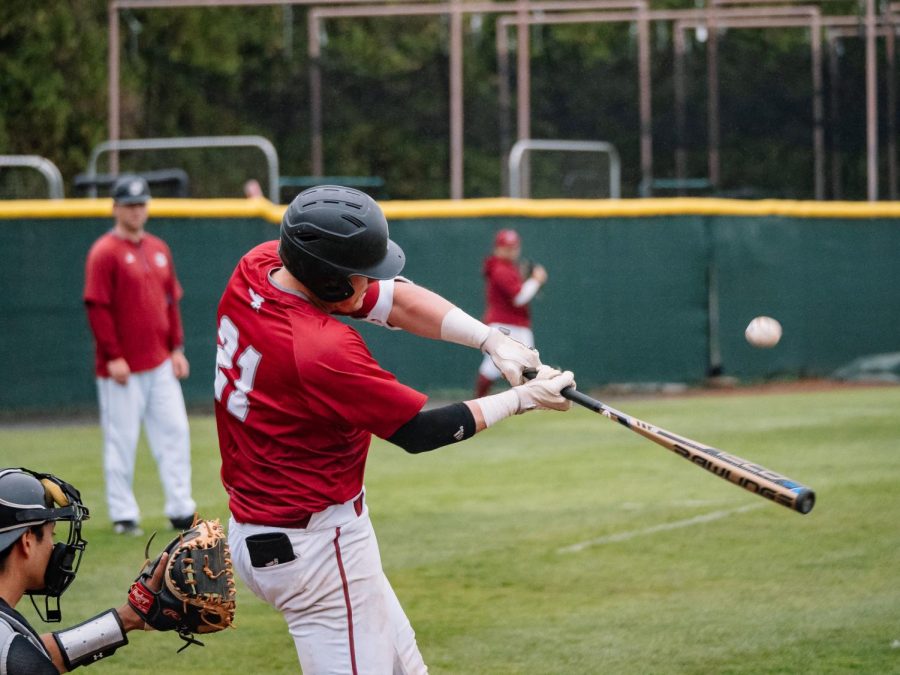 The Massachusetts baseball team comes out of the weekend with a 1-2 record against Delaware State, winning the first game of Saturday’s doubleheader 6-3, then dropping the next two 1-0 and 6-3 respectively to the Hornets.

Offensive struggles and relief pitching were the primary factors in its record this weekend, as they were shut out in game two and had only three runs in game three.

“We’re just going to have to see how guys perform, and we’ll make adjustments accordingly,” head coach Matt Reynolds said. “We knew our bullpen coming into it, but we [knew we would have to] figure it out as we go, as far as what the bullpen roles will be. We’d like to be able to win some games, and figure everything out at the same time, but it doesn’t always work out that way.”

In the seventh and eighth innings of Sunday’s game, relief pitchers allowed five runs, six hits and five walks, changing the score from 3-1 UMass (1-2) to 6-3 in favor of Delaware State (2-1).

After a strong offensive showing in the first game from the Minutemen, they combined for only three runs in their final two, which led to two straight losses.

“I thought there were some opportunities that we left on the table,” Reynolds said. “Hopefully we can tighten that up, because it is just going to keep getting harder for us as we go along.”

In a struggling offense, Anthony Videtto shined, as he went 5-for-9 hitting with a homer, four RBI and three doubles. Videtto’s hitting alone could’ve won UMass its first game, as he was responsible for four of the six runs. In that game, Videtto hit an RBI double in the first, a two-run shot in the third and then reached home in the fifth on a hit from freshman shortstop Chris Pearsons.

“He was outstanding this whole weekend,” Reynolds said. “He was a presence at the plate every time and especially with Eddy [Hart] down, we really needed somebody that could really notch some runs in. We were very happy with his performance.”

Senior captain Eddy Hart, who was a NEIBA All-Star last year, only played in the second game this weekend, where he was at third base and had three plate appearances, hitting a single and walking. The absence of Hart and fellow 2019 NEIBA all-star Collin Shapiro was felt this weekend on the offensive end. Shapiro had the best batting average last season, while Hart had the third-best.

Starting pitching was not much of a concern for the UMass coaching staff this weekend, as juniors Sean Harney and Ben Shields along with sophomore Jack Steele pitched a combined 14 innings, allowing only four runs, and only two of those being earned, while also striking out 12. Shields had the most notable performance of the three, throwing five shutout innings with seven strikeouts and allowing only two hits and one walk in the 1-0 loss Saturday.

“I thought all three guys gave us a chance to win,” Reynolds said. “Shields was really good, pretty much dominant and I thought Steele was very good today too. He ran out of gas today, but it’s the first weekend and we had them on low pitch counts. I think all three guys hit a wall around the 60-70 pitch mark, but I’m happy with the three starts we got.”

The youth in this baseball team was shown this weekend. Videtto, Nolan Kessinger and Connor Smith were the only upperclassmen who had a consistent role in the starting nine. The absence of experience makes the zero runs in game two and the five runs allowed in relief on Sunday a logical conclusion, especially this early on in the season.

“There were times where their youthfulness and their lack of experience showed up, but they also handled themselves pretty well,” Reynolds said. “Most of our innings in the infield were played by people that have very little to no college experience whatsoever. It’s going to be a growing process, but overall I was certainly not displeased, understanding how many young guys were on the mound, and then in the field and the lineup.”

The Minutemen will head to Annapolis, Maryland next weekend for a three-game series against Navy.

Joseph Aliberti can be reached at [email protected] and followed on Twitter @JosephAliberti1.