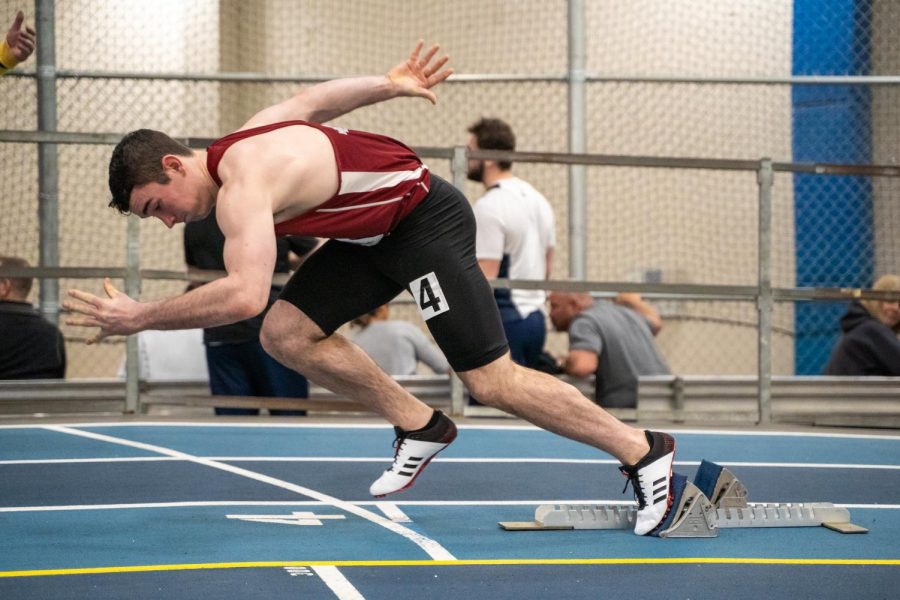 The Massachusetts track and field teams went up against more than 90 other teams at the David Hemery Valentine Invitational over the weekend.

Amongst the steep competition, both the men’s and women’s teams took the opportunity to test their athletes and were rewarded with a series of personal bests in their last scheduled meet before the Atlantic 10 Indoor Track & Field Championships.

On the men’s side, Coston O’Brien came in second in the weight throw with a personal best distance of 18.70 meters, coming even closer to the 1963 program record than his previous marks. O’Brien also competed in the shot put, where he finished 22nd.

In the packed mile race, the UMass women’s team saw some positive results, as junior Caroline Clark, freshman Sarah Conant and sophomore Colette O’Leary all achieved personal bests, with Clark breaking the five-minute mark at 4:59.17 and Conant coming in just above it at 5:00.49.

Similarly, the men’s 400-meter race saw Christopher Matthews, Colin Stoddard and Lucas Honohan achieve personal bests with times of 49.52 seconds, 49.27 seconds, and 48.67 seconds, respectively. All three also competed in the 4×400 meter relay alongside senior Kevin Shannon, who competed in the 500-meter race. The team came in ninth with a time of 3:18.76.

In the women’s 200-meter race, senior Lindsay Witt finished with a time of 24.51 seconds, putting her at the top of the conference for the 2019-20 indoor season, while teammate Emily Cowan finished with the second-best time.

“Coach [Taelour] Jefferson has done a fantastic job with our sprinters and that should be noted,” women’s coach Julie LaFreniere said. “Lindsey Witt, when she came to school here, was a recruited walk-on, and now she’s at the top of the conference in [the 200-meter], in a conference which has some very strong sprinters in it.”

The women’s 4×400 meter relay team, composed of Witt, Ariel Christie, Bryanna River and Cowan, beat out Davidson’s team by less than a second with a time of 3:47.20, which placed them in the final open spot for the “fast” section at the A-10 Championships.

Freshman Eugene Meleshkevich placed18th in the men’s 60-meter sprint with a time of 7.17 seconds. Meleshkevich’s personal best time in the event was achieved at the 2020 Dartmouth Invitational earlier this month.

Jada Harris placed first in the high jump with a jump of 1.75 meters. She also competed in the 60-meter hurdles and came in second with a sub-standard time of 8.71 seconds.

“She won, but I don’t think she was very happy with her performance,” LaFreniere said. “She was a little flat and still won. […] We’re going to really focus on sharpening up everyone across the board in the next two weeks.”

With the teams only allowed to bring a limited number of athletes to the conference championships, the coaching staff will have several tough decisions to make in the near future.  Outside of the standouts, the next two weeks of practice will be the final chance for some of the middle-ranked athletes to prove themselves for the chance to compete at the end of the month.

The A-10 Championships will be hosted by the University of Rhode Island on Feb. 29 and March 1.