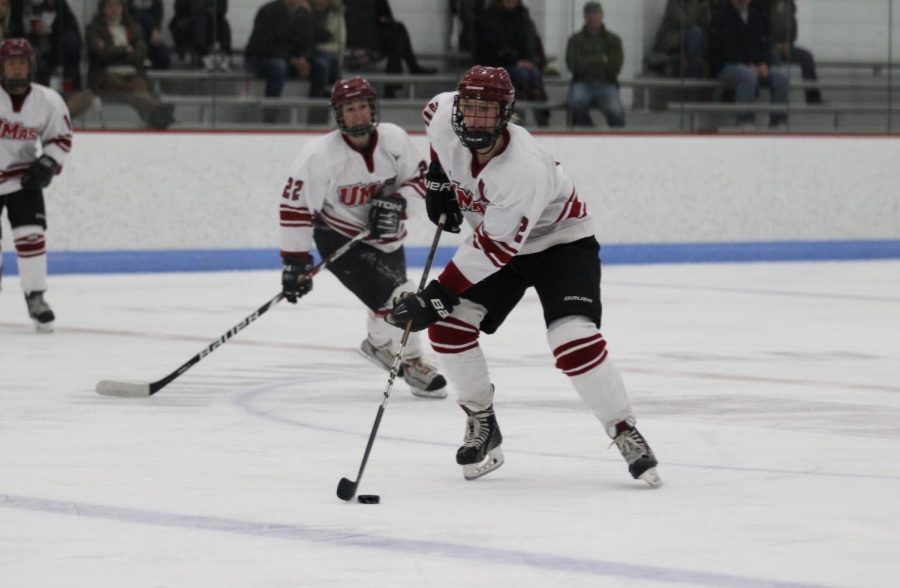 The Massachusetts women’s club hockey team dominated Rhode Island once again to cap off a tremendous regular season on Senior Day. The Minutewomen (15-6-1) are led by a lone senior, Juliana Dolan, who was recognized for her great career at UMass by coach Bill Wright and her family before the game.

“I precisely remember recruiting Juliana [Dolan],” Wright said. “She was playing for Arlington Catholic and I’m down in their arena in Arlington watching her play against Barnstable. I remember all of the meetings I’ve had one on one and the times that we’ve had. It’s an important day for her and it’s very satisfying for a coach.”

Despite a 3-0 shutout victory, the Rams (5-12) played a much better game than the previous night when they conceded nine goals. Their defense vastly improved, limiting UMass to only one goal in each of the three periods. UMass defender Holly Russell believed the Minutewomen struggled due to their lack of effort stemming from their big victory the previous night.

“I think we kind of expected to be able to beat them by a lot,” Russell said. “URI always come out big and strong, always working hard, making them a difficult team to play against. I think we underestimated that coming into the game but eventually we picked it up and put a lot of pressure on them at the start of the third period.”

Coach Wright agreed with Russell, believing that his team was outworked for the majority of the game.

“I think we got caught up in the Senior Day festivities a little bit and came out a little flat,” Wright said. “Once we realized we were in for a game we started to pick it up a little bit. I don’t think we played our best but we did what we had to do to get the win.”

In similar fashion to last night’s game, Russell scored two goals again on Saturday, first with one minute left in the first period, and then two minutes left in the second period.

Defensively, UMass played very strong, preventing Rhode Island from getting a shot on goal in the third period. Despite this, the Rams got their offense off to a fast start in the opening two periods, but clutch saves from Minutewomen goalkeeper Casey Marshall kept them scoreless.

Dolan, being the only senior on the team, has been a leader for the underclassmen this season, but says that her team has all of the traits to be seen as a veteran group.

“Even though we’re a young team I think the sophomores stepped up to the role of being an older leadership group,” Dolan said. “I think they did a great job helping me and the juniors out with leading the freshman to knowing what the league is all about and how to win.”

Dolan got herself on the scoresheet for UMass’s third and final goal of the day. As the puck was bouncing around in front of net Dolan got enough on her stick to glide it past Rhode Island goalkeeper Janelle Kelleher.

The Minutewomen will face Rhode Island two more times for their conference tournament, with wins hoping to guarantee UMass a place in the national tournament. The games will be held Friday, Feb. 21 at 8:50 p.m. and Sunday, Feb. 23 at 10:50 a.m.