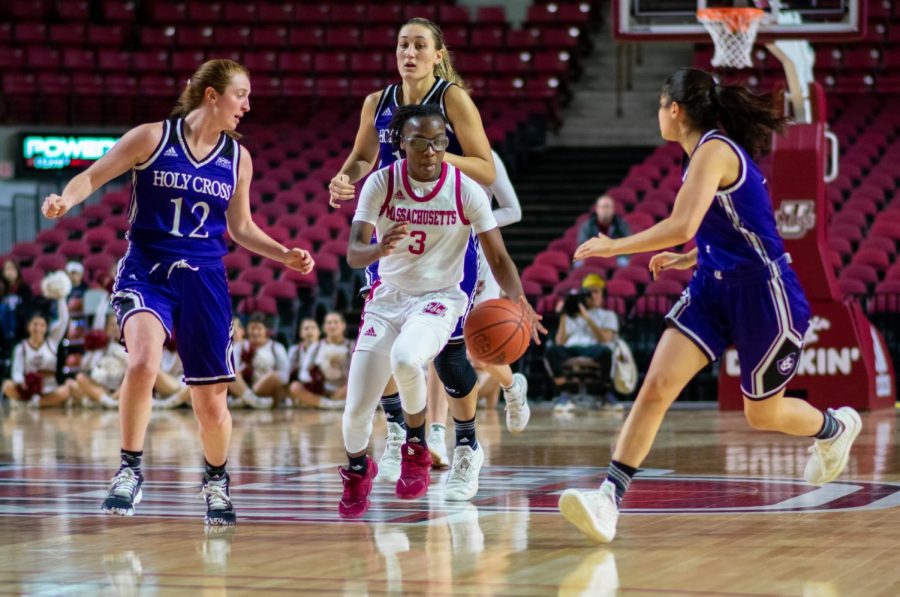 Coming off of two straight losses, the Massachusetts women’s basketball team has the chance to bounce back in a big way.

UMass (16-8, 6-5 Atlantic 10) will host A-10 leader Dayton (17-7, 10-0 A-10) Wednesday night. The matchup comes four days after the Minutewomen’s five-point loss to third-place Fordham. Despite the defeat, which came on the heels of a disappointing loss to George Mason, who sit at the bottom of the conference, UMass came out of the game with the sense that they could compete with the top of the conference.

“If we play 40 minutes of complete basketball, we can beat anybody in the A-10,” UMass coach Tory Verdi said. “So, we’ve got to figure that part out. We can’t have a period like the second period [Saturday] and get down and dig ourselves a hole. I was really pleased with our second half, we executed and played well, well enough to put ourselves in position to win a basketball game with a couple possessions down the stretch.”

It’s been an up-and-down year for the Minutewomen, who won a program-record 11 games from November into January before falling back to earth shortly after the start of the A-10 schedule. After seemingly righting the ship following a three-game losing streak plagued with shooting woes and stagnant offense, UMass stumbled again with the loss to George Mason.

“We know what we’re capable of, and when we are good we’re really good,” captain Hailey Leidel said. “So just to find that momentum and hold it for the whole game would be our ideal, what we’re looking for. Even games we’ve won, we’ve had those ups and downs still, so we just need to put that 40 minutes together.”

The shooting woes that hamstrung the Minutewomen in mid-January returned in the second quarter against Fordham, as UMass went just 2-of-14 from the field to let the Rams pull away. While abysmal shooting from deep cost the Minutewomen more in the long run, struggles to finish around the basket have been a consistent theme over the course of the A-10 schedule.

“We’ve got to make layups,” Verdi said. “We got a lot of high percentage shots and we just didn’t finish. Those become like turnovers, and when you’re shooting layups and missing layups, they’re like turnovers. They’re deflating. Then all of a sudden you get down and it gives the other team momentum.”

Going into Wednesday’s game, UMass sits at number seven in the A-10. Three of its five A-10 losses have come to teams in the bottom half of the conference, with wins against fourth-seeded Duquesne and sixth-seeded Davidson the high-water marks for a young Minutewomen team.

Some of the struggles in A-10 play, particularly on offense, have come where that youth has shown through.

“Sometimes we’re trying to do too much or speeding through offenses instead of just taking what the defense gives us,” Leidel said. “Against Fordham, they were switching a lot and we weren’t hitting the post as much as we really could’ve and should’ve. So just knowing what looks we want to get against whatever team we’re playing.”

UMass has been relying heavily on Leidel and Sam Breen, who lead the team in scoring with 16 and 17.8 points per game, respectively. Much of the production has come from the top of the lineup, as seven players – Leidel, Breen, Vashnie Perry, Destiney Philoxy, Bre Hampton-Bey, Maeve Donnelly and Paige McCormick – have accounted for over 90 percent of the team’s minutes.

On Wednesday, that may change.

Tip-off against Dayton is set for 7 p.m. at the Mullins Center.