UMass women’s basketball holds on for crucial A-10 win

Leidel and Breen combined for 51 points 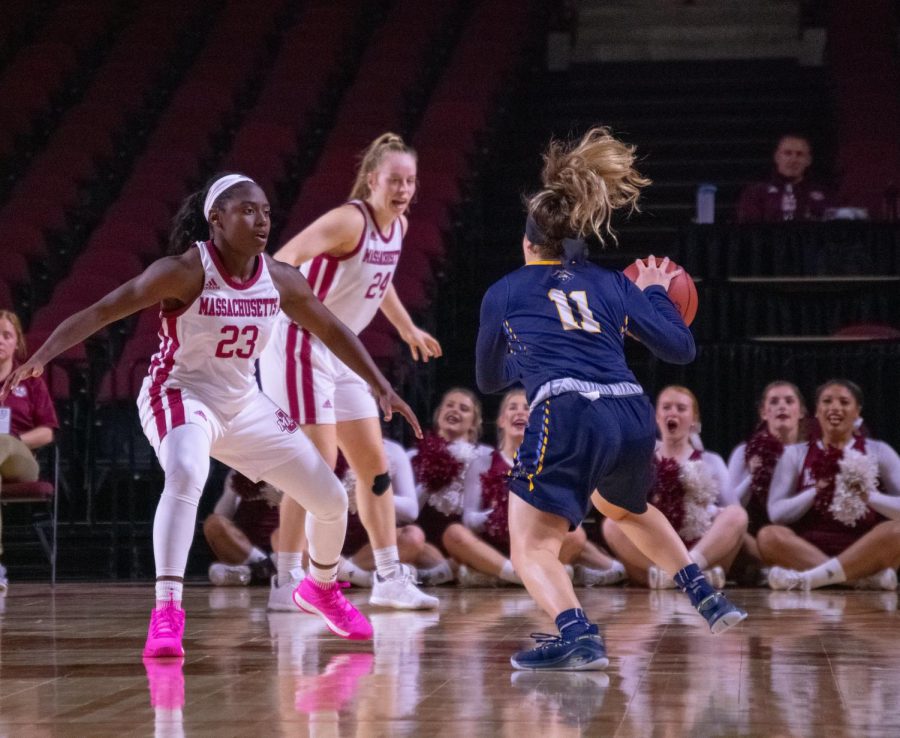 Going into halftime on Sunday, the Massachusetts women’s basketball team looked like it was going to succumb to the same struggles that had cost it three of the last four games. The Minutewomen were down by 13 and flailing on offense, shooting just 29 percent from the field en route to 26 first-half points, while a typically strong defense was on pace to allow Davidson almost 80.

“I think it’s a big confidence-booster, knowing that we could go in there on the road and beat a really good Davidson team today,” UMass coach Tory Verdi said. “I’m extremely proud of our players, how they handled themselves. We faced some adversity, didn’t fold. We continued to fight, and that’s what I want our program to be known for. We go out there and we continue to work, and that’s exactly what we did here today.”

The Minutewomen held a one-point lead with three minutes to go, and then a six-point lead with a minute left after a free throw from Bre Hampton-Bey. Davidson cut the lead to three with 49 seconds to play, but couldn’t get another basket on its next two possessions, finally resorting to fouls in the final seconds that stretched the final margin to eight.

“Our composure was on point,” Verdi said. “We knew we had to execute, and we did that on both sides of the ball. I thought defensively we did a great job defending them late game, to where they didn’t get any open looks. They took some really bad shots, and so we were obviously then able to get possession of the ball where they had to foul us. And so the game was pretty much over at that point.”

After a stretch where UMass has struggled offensively, it saw its two top scoring threats step up on Sunday afternoon. Sam Breen led the way with 26 points on 11-of-24 shooting, while Hailey Leidel was right behind with 25 points on 9-of-17 from the field. The rest of the team accounted for just 19 points.

“Our two most dynamic scorers, Sam and Hailey, are getting touches and they’re producing for us,” Verdi said. “Now [Vashnie Perry] and Bre and Destiney didn’t score, but they still impacted the game, especially Vash did a great job for us defensively, and Bre went in and got some big rebounds for us as well.”

On the other side, Davidson gained the advantage in the second quarter thanks in part to uncharacteristically good shooting from behind the arc. Ordinarily shooting about 33 percent from deep, the Wildcats hit 6-of-9 in the second quarter, propelling them to 28 points and a 13-point lead.

“They did a great job attacking us, catching us in rotation and getting kick-out threes, and those threes allowed them to get some separation on us,” Verdi said. “We didn’t lose our composure, we came out at halftime and I thought we did a great job the rest of the game executing on both sides of the ball.”

After the win, UMass remains fourth in the A-10 with just under a month left in the season. The Minutewomen will go on to play George Mason on the road on Wednesday, with a rematch at home against Davidson on Feb. 22.