Minutewomen fall to .500 in Atlantic-10 play 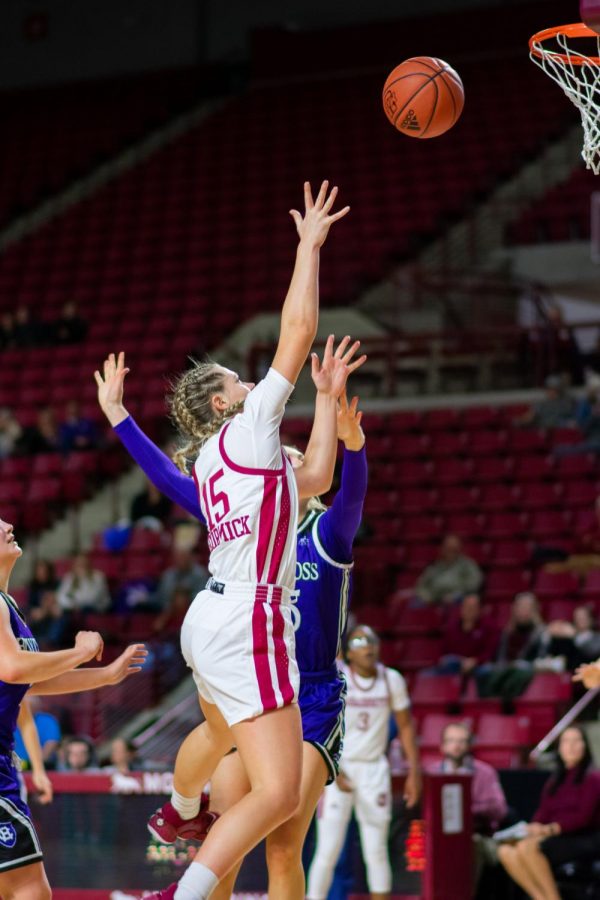 The Massachusetts women’s basketball team had a wide-open opportunity to hand the Atlantic-10’s top seed, Dayton, its first loss in conference play.

After a missed free throw by junior guard Bre Hampton-Bey, junior forward Sam Breen aggressively grabbed the rebound and put the ball into the basket as she fell to the floor for an and-one opportunity. On the next possession, Flyers’ (18-7, 11-0 Atlantic-10) guard Jayla Scaife was fouled by freshman center Maeve Donnelly who picked up her fifth of the contest and was replaced by junior guard Paige McCormick. Scaife hit both free throws, leaving UMass with one last chance, but the Minutewomen (16-9, 6-6 Atlantic-10) were unable to score and were left with the 52-51 loss.

“ I’m really proud of my team,” UMass coach Tory Verdi said. “ I thought we came out with great energy, focus, purpose, and want-to off the charts. I just told them we have to continue to win the day and continue to do the things we’re doing. Regardless of who we play, we have to play this way and this hard.”

Junior forward Sam Breen has become a blossoming star over the course of the past few weeks, and she’s already off to a scorching start in February. After scoring 21 points on Saturday against Fordham, Breen had 23 points, 12 rebounds, two blocks, and two steals shooting 9-of-15 from the field and 2-of-5 from three-point range. Her versatile offensive skillset and dominant rebounding abilities have been vital for the Minutewomen of late.

“Since coming here in general, my confidence has definitely gone up,” Breen said. “Coach Verdi and all of the coaches have a lot of confidence in me which helps bring my confidence up. Working everyday on different moves and different things I can do helps me be more confident with them in games so I’m not just going out there blind.”

Senior guard Hailey Leidel also made her mark on the game, particularly from behind the Arc. She had 13 points, six rebounds, three assists, and two steals shooting 4-of-12 from the field and 4-of-6 from three-point range.

“ It’s always nice to have someone else who can put up a lot of points,” Leidel said. “She draws so much attention in the post especially if she gets doubled that it’ll open up somebody else on the team even if it’s not me. It’s just nice to have multiple threats on different parts of the court.”

Despite falling short in the final seconds, the Minutewomen’s ability to compete with the best team in the conference proves the potential that they have. Their remaining schedule will be slightly less difficult as they conclude conference play in their final four games of the regular season.

“Obviously, it hurts anytime you lose a game in a close situation,” Leidel said. “Other than the fact that we wish we would’ve won, we just know if that’s the best team in the conference and they’re undefeated than that gives us that confidence. It gives us that confidence that we can take how we played today and carry it over to help us in our remaining games.”

Leidel and the Minutewomen will be looking to get back in the win column when they play Saint Louis on the road this Sunday at 3 p.m.

Richard Rodgers can be reached by email at [email protected] or followed on Twitter @RichardDRodgers.