UMass remains No. 6 in ACHA 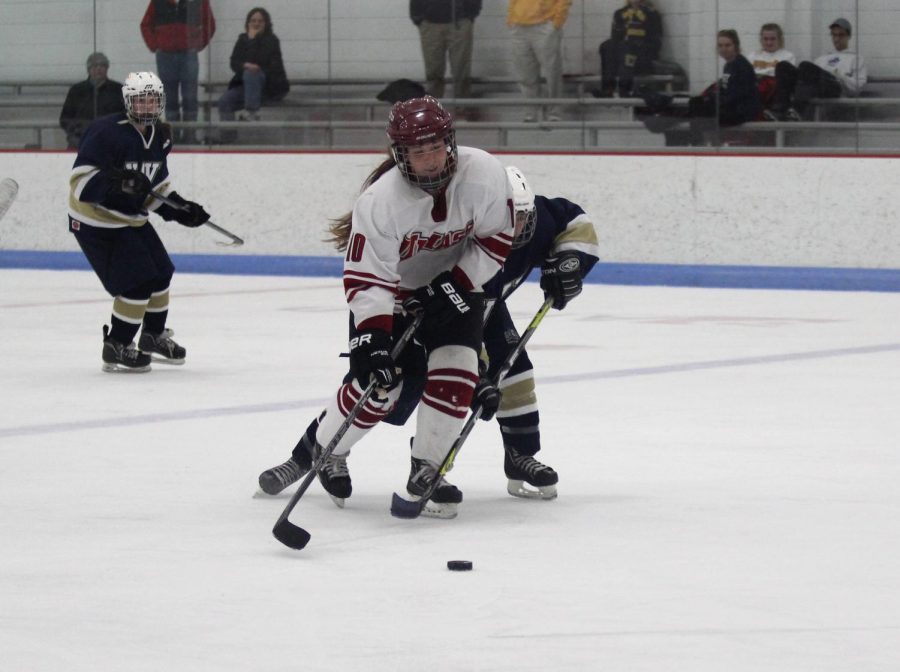 The Massachusetts women’s club hockey team secured a 3-0 victory over Penn State after a slow start by both sides. In the second game of the series against the Nittany Lions (4-11), the Minutewomen (13-6-1) were able to complete a four-game season sweep, winning each matchup by three or more goals.

UMass head coach Bill Wright credited Penn State for its physical style of play, saying that his players needed to step up their game more than usual to dig out the victory. The NIttany Lions held the Minutewomen scoreless in the first 28 minutes of play.

“When you have a team that plays hard, you have to up your effort level,” Wright said. “It took us a little while to get there but I thought we played a strong weekend overall. We came out on the positive side, so we move on.”

With roughly 12 minutes to go in the second period, forward Juliana Dolan got UMass on the scoresheet with a shot just out of reach from Penn State goalkeeper Lindsey Scott. Dolan holds the second most points on the UMass side, with 24. Dolan’s goal helped give life to the Minutewomen on offense, with an influx of shots thereafter.

“I definitely think the first goal of any game really sparks the momentum,” Dolan said. “So I am definitely glad we were able to get it and were able to work from there, and not let them come back.”

With 12 minutes left in the third period, Dolan was tripped as she was shooting by Nittany Lions forward Katie Horan. This allowed Wright to choose whether his team would have a two-minute power play or a penalty shot. UMass proceeded with taking a penalty shot which Dolan easily converted, giving the Minutewomen a two-goal advantage.

“I chose the penalty shot rather than the power play because the power play hasn’t been successful in recent games,” Dolan said. “Since the infraction was on her [Dolan] she had to take the shot, but that’s someone I can trust taking it.”

Prior to Dolan’s second goal, Penn State forward Crosby Deliman almost tied the game at one apiece but missed the puck on the follow through of her shot in a one-on-one with UMass goalkeeper Casey Marshall. It could’ve been a turning point in the game if Deliman converted, giving Penn State momentum with an even scoreline. The missed attempt did help spark the Nittany Lion offense, as they took seven of their 11 total shots on goal in the third period.

Freshman Katherine Paradis took a shot as she was falling after Penn State had opted to pull their goalkeeper in return for an extra attacker. The puck was untouched and smoothly found the back of the net giving UMass the three-goal lead with a minute and a half remaining.

“Obviously I was on the ground and somehow I got the puck in,” Paradis said. “I just put it on net and the goalie wasn’t even there so it just happened to go in.”

The Minutewomen will conclude their four-game home stretch with two games against league rival Rhode Island.

“It’s definitely going to be a tough matchup because they’ve always been our big rival in the league,” Dolan said. “It’s our senior day so it will give them even more motivation to beat us. They come hard to play in every game against us and we’ll just have to shut them down.”

If UMass wins both games against the Rams it will remain in the top eight in the ACHA rankings, granting it a place in the national tournament. The Minutewomen will face Rhode Island Friday, Feb. 7 at 8:50 p.m. and Saturday, Feb. 8 at 10:50 a.m. at the Mullins Center.