UMass score nine to capture its biggest win all season 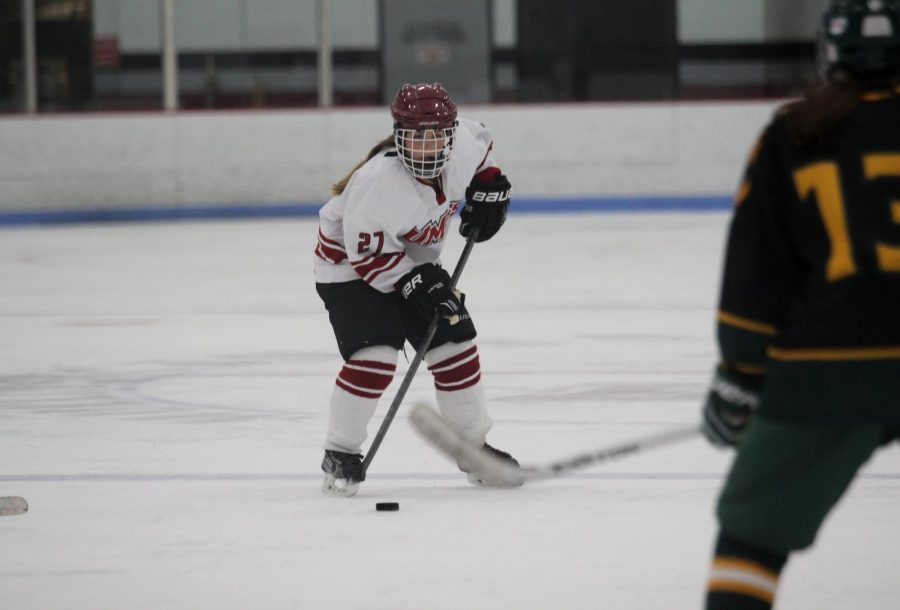 The Massachusetts women’s club hockey team had an outstanding performance in a 9-1 rout of league rival Rhode Island. In their third matchup this season against the Rams, the Minutewomen (14-6-1) put on an offensive showcase, scoring five of their nine goals in an eight-minute span.

UMass coach Bill Wright, saw improvement in his side from last week’s two home victories against Penn State. However, Wright also noted that the game was very uncharacteristic of the previous matchups between the two teams.

“I thought we played a really strong game,” Wright said. “I think we played a better possession game than we did last weekend. They’ve got a lot of girls out hurt and sick so obviously that had something to do with the scoreline. That’s not a typical URI-UMass game, but when you have those games you take them and don’t ask questions.”

Katerina Nikolopoulos led UMass, as she has all season. With three goals and an assist on the night, she improves to 31 points on the season, the most for her side.

My line has been doing really well,” Nikolopoulos said. “Me and Juliana [Dolan] have done really well together this year and last year, so that really helps.

“We wanted to keep our momentum going,” Nikolopoulos said. “We didn’t want to let them get the first goal of the period because it would’ve given them more confidence going forward.”

With just over six minutes left in the first period, Juliana Dolan scores the opening goal for UMass, receiving the assist from Holly Russell. Three minutes later, Russell would score a goal of her own, giving the Minutewomen a quick two goal lead, sparking an overwhelmingly dominant performance for her team.

“I got my feet going the first shift,” Russell said. “I thought that helped put my line, and our first shift in our zone, which set a pace for our period with each other. We were able to move the puck around URI together, which was really helpful.”

Rhode Island would eventually get on the scoresheet six minutes into the third period, where a shot from Abbigale Sampson was deflected into the corner of the net. Despite conceding that goal, UMass goalkeeper Casey Marshall recorded quality saves throughout the second and third period to keep the game out of reach.

In addition to having an outstanding performance to tack onto their season, this win also pushed the Minutewomen one step closer to reaching the national tournament, which they missed out on last year.

UMass will face Rhode Island again tomorrow where the Rams will look to bounce back from one of their worst losses of the season. Coach Wright will stick to his same game plan, while fine-tuning the smaller stylistic details.

“We have to maintain our way of playing,” Wright said. “We don’t have the time or games left to play around with our style. We just have to keep moving straight ahead.”