Dartmouth dominates second half to secure the win 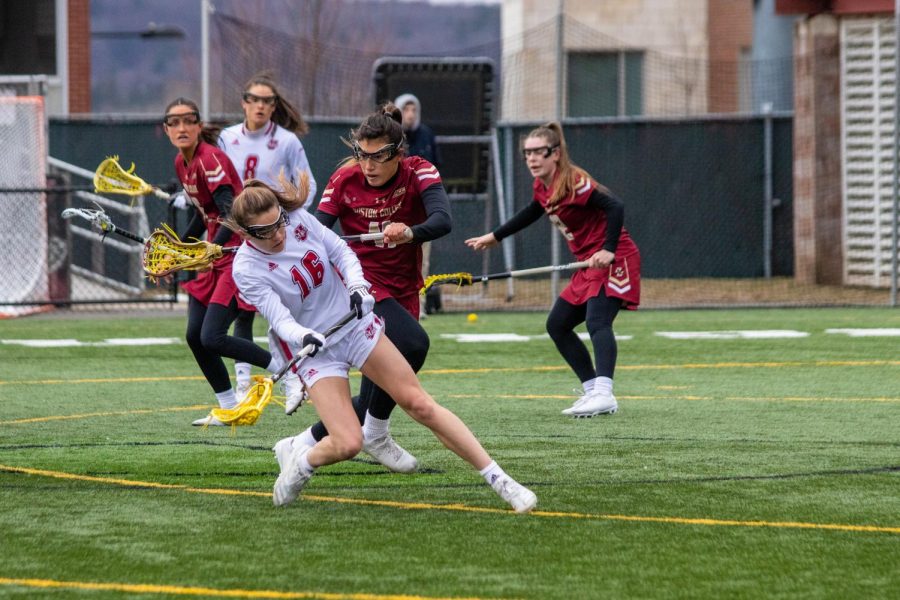 After a back-and-forth first half, the Massachusetts women’s lacrosse team watched Dartmouth pull ahead late as it fell 15-11 on Saturday.

The Minutewomen (1-1) were hoping to ride the momentum from their big win over BC last week, and established their offense early behind impressive performances by attackers Haley Connaughton and Kaitlyn Cerasi. However, UMass’ one-goal lead after the first period did not last. Dartmouth scored six of the first seven goals to start the second half, allowing it to cruise to a victory.

“We just talked there at the end about being more mentally and physically tough,” coach McMahon said after allowing the Big Green to control much of the second period. “They continued to apply pressure to us, especially physically… And I think halfway through the second half, we let that pressure get to us a little bit.”

The Minutewomen were able to cut the gap to three with 16 minutes still to play, but Dartmouth always seemed to have an answer, never allowing UMass to close the gap.

“We battled and we continued to fight, and I really loved our intensity and energy, but at the end of the day we just didn’t put it in the back of the net,” McMahon said.

The Minutewomen were stuffed on offense thanks in large part to an excellent outing from Dartmouth goalie Kiera Vrindten, who stopped 12 of the 23 shots the Minutewomen threw her way.

Despite the loss, Cerasi and Connaughton played great games offensively for UMass. Connaughton finished with four goals and two assists, including an outstanding behind the back goal late in the game.

“Haley stepped up and tried her best… She had some great goals and was playing aggressive,” McMahon said. “She helped us gain a little momentum there especially in the end.”

Cerasi, who initiated a lot of offense for the Minutewomen by driving from X, was able to score three goals on 12 shots and added three assists.

“We always feel confident in her when she has the ball,” McMahon said. “She had a lot of quality opportunities and she was able to put a few away.”

Going forward, UMass will continue to rely on Connaughton and Cerasi to generate its offense; the pair have already combined for 15 goals in its first two games of the season.

Defensively, this game proved very tough for the Minutewomen. Goalie Lauren Hiller allowed 15 goals while only making six saves. The UMass defense allowed Dartmouth to convert all five of its free position chances into goals and struggled to guard the attacking unit of the Big Green. Sophia Turchetta ended the game with four goals, and Ellie Carson scored five, while each also added an assist for Dartmouth.

The Minutewomen will have a lot of work to do moving forward in the season, but will have a long break before playing again, giving them plenty of time to improve and refine their game.

“We just got to get back to our basics and work on finishing,” McMahon said. “I think a lot of it is just working through pressure moments and competing in practice and pushing each other to get better.”

UMass will look to bounce back from its loss today when it takes on UMass Lowell on the road a week from Monday.

Colin McCarthy can be reached at [email protected]