With her grandmother on her mind, Perry has a career day in win over Davidson 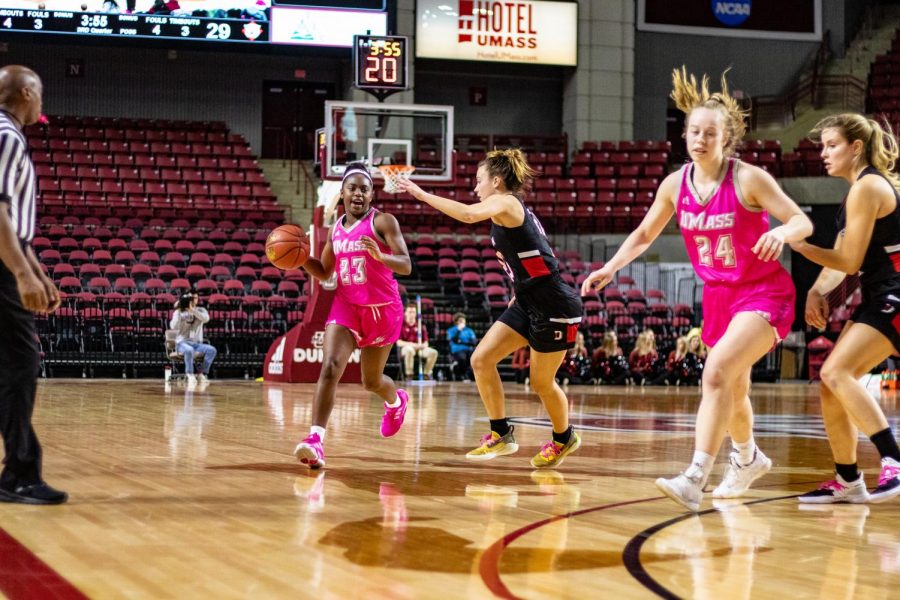 Even before it started, Vashnie Perry knew today would be special.

Dawning pink jerseys for the only time this season, the Minutewomen guard dropped a career high 23 points, leading the Massachusetts women’s basketball team to a 61-48 over Davidson on Play 4 Kay day, an annual game for women’s college basketball teams across the country raising awareness for breast cancer in honor of former North Carolina State head coach Kay Yow who passed away from the disease in 2009.

The illness has struck close to home for a few members of the women’s basketball family including Perry who lost her grandmother to it. With her grandmother’s name on her shoes, the senior captain had the best game of her UMass career that she says has been in the making since last year’s edition of Play 4 Kay.

“It was very personal for me,” she said. “I just told myself last year, ‘next year take this game more seriously and play for her.’ So that’s what I did. I’m sure she’s smiling down on me right now.”

Perry says the memory of her relative certainly helped her shoot 10-16 from the field adding three assists to just two turnovers.

“It definitely helped me out today,” she said.

This game is also special to head coach Tori Verdi. His wife Heather is a breast cancer survivor. He has also been a women’s basketball coach for 15 years, so he knows how influential Kay Yow was.

“Special day for women’s basketball, Kay Yow’s message resonates throughout the landscape of women’s basketball,” Verdi said. “And for me specifically, I know what the fight looks like, I know what it feels like and its tough. Any opportunity to bring awareness to a cause like this, is a special day. Our players were educated and understand who Kay Yow was and how she wanted to bring the community together.”

On the court, Verdi was particularly pleased with Perry’s effort. Throughout the year, the team has been searching for someone other than Hailey Leidel or Sam Breen to carry the load offensively.  On Saturday, that was Perry. Her play was instrumental in the team’s crucial 13-point win.

With just two games left in the regular season, Saturday’s win puts UMass in a good position to host the opening round of the Atlantic 10 tournament, something that Perry and her teammates has never done as Minutewomen.

The 23 points took a lot of pressure of Leidel and Breen to be offensive catalysts allowing them to play more as role players.

“Vash was incredible today. She really got us going from jump,” Breen said. “That really helped out. It opened up the post, opened up the guards, and we took advantage of that today.”

In the first half, Davidson made it a point to get a body on Leidel everywhere she went. Perry took advantage of the space that created.

“It opens up things tremendously,” Verdi said. “I thought they did a really good job of containing Hailey. But what that does is opens up driving lanes and Vashnie took advantage of that. She did a great job of creating for herself and others.”

Leidel only took three shots in the first half but the team led by 10 heading into the locker room.

Perry was just as good in the second half but as the Wildcats focused more attention on her, the always dangerous Leidel started putting her own stamp on the game with 12 points in the final two quarters.

When the Minutewomen have gotten a third scorer, they are nearly an impossible team to defend. Going forward, Perry knows how important her scoring ability is to the team’s success.

“The team can be really dangerous,” she said. “When everyone does their thing, you saw how it is. We’ll get the results.”

Breen and Leidel both had 12 points in the win.