‘He’s one of the best defensemen at this level’ 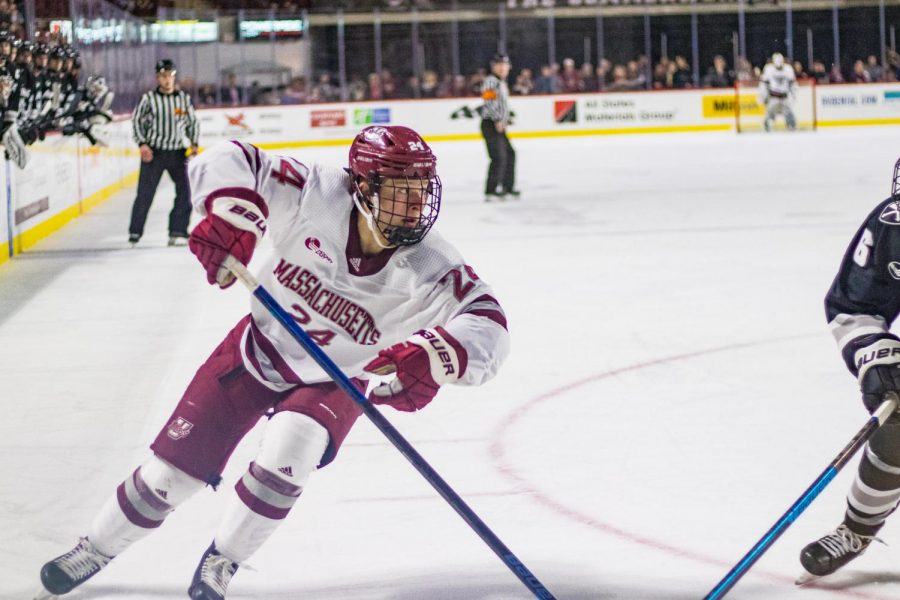 Having not recorded a point in over a month, Zac Jones finally broke through with the Massachusetts hockey team tied 1-1 with Providence College on Friday night.

Jones gathered a loose puck near the blue line and wristed a shot toward goal. UMass center Niko Hildenbrand—camped in front of the Friars’ goal—redirected the puck into the net for the lead.

“Honestly, it was a perfect shot,” Hildenbrand said after the game. “One of those ones that you’re like, ‘Perfect. This is going to be easy to tip.’”

The assist was the first of many for Jones on the weekend. The freshman defenseman tallied three more assists in Saturday’s game to bring his weekend point total to four after mustering four points in his prior 16 games.

Although Jones has struggled to get his name on the score sheet as of late, he’s become an indispensable part of the Minutemen’s defensive corps.

For a team with the fourth-best defense in the country, its no small feat that the offensive-oriented Jones has developed into one of the team’s stronger defenders.

“[Jones] was a bit of a liability defensively,” coach Greg Carvel said of Jones’ play to start the year, “but now his defensive game has come a long, long way.”

Jones, a season removed from playing in the USHL, has faced a lot of adjustments since joining UMass. With all the changes the freshman has undergone, learning to handle the physicality of college hockey has been the most difficult.

“Last year in the USHL, it wasn’t as heavy as it was here, so I didn’t have to play too much defense,” Jones said, “and then when I came here—I’ve definitely learned a lot more about playing in the d-zone now.”

With veteran defensemen such as Marc Del Gaizo, Ty Farmer, Colin Felix and Jake McLaughlin on the roster, Jones has had no shortage of experienced voices to help him in his first season in Amherst.

“When I come back to the bench [Del Gaizo, Farmer, Felix and McLaughlin] will be letting me know things,” Jones said. “It’s just huge to hear, especially as a younger guy, all the older guys you look up to, trying to be like them some day and be as good as them in the d-zone. They’re definitely helping me out a lot.”

Del Gaizo specifically shares a similar path to Jones, having made the jump from the USHL to D1 hockey last year. In Del Gaizo’s freshman year, he found himself paired with Hobey Baker award winner Cale Makar and put up 29 points, the fourth-most by a defenseman in Hockey East.

Now, Del Gaizo has shared some of the wisdom he learned his freshman year about the USHL to NCAA jump with Jones.

“Being simple is the biggest thing at this level. I’ve talked to [Jones] a few times about it,” Del Gaizo said. “Not trying to over-handle pucks, that was something that I had to learn really quickly—to just move it and make your first read sometimes and just keep it really simple and try not to do too much.”

It seems Jones had made the adjustment with very few growing pains. Although the defenseman has gone through two six-plus game scoreless streaks, he’s still had a wildly successful freshman year.

Through his 27 games, Jones has tallied three goals and a team-best 15 assists. In Cale Makar’s freshman season, he put up a near-identical five goals and 16 assists.

With the Hockey East championship on the line, the season winding to a close—the Minutemen have just five games remaining—and the level of competition not slowing down with No. 11 UMass Lowell on the horizon, Jones finding his groove could prove vital. Jones also thinks such a tough stretch has made himself even better.

“You’re playing against guys who are first-round picks all the time,” Jones, a third-round pick himself, said, “especially in Hockey East. It’s a great level of competition. I love playing in the Hockey East and I love playing here. It’s challenged me in the d-zone and that’s what is making me a better player.”

While Jones might’ve finally gotten off the schneid this past weekend, it wasn’t something bothering the young blue-liner. For Jones, he just needs to keep playing his game.

“I watched him at practice today,” Carvel said on Tuesday, “and his vision, his ability to make passes—he’s one of the best defensemen at this level.”