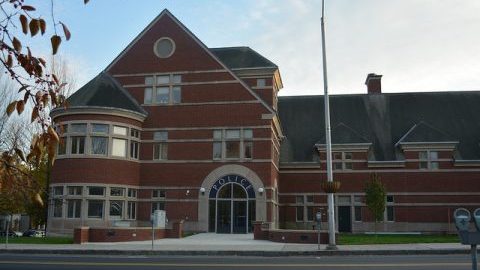 By Kathrine Esten and Ana Pietrewicz

8:36 a.m.: Traffic enforcement was conducted in the area of East Pleasant Street and Strong Street. Two citations were issued speeding in a school zone.

8:55 a.m.: Traffic enforcement was conducted in the area of Strong Street. One citation for speeding was issued. An average speed of traffic was 35 miles per hour in a posted 30-35 m.p.h. zone.

12:56 p.m.: No speed violators were reported on South East Street.

8:48 a.m.: A white 2011 Ford Fusion was stopped on North East Street for a hands-free violation. The operator’s license was expired and was nonrenewable. Ernie’s Towing was called to tow the vehicle and a citation warning was issued.

10:42 a.m.: At Puffton Apartments, 1040 North Pleasant St., a property manager had a question about the timeline of the summons process for a resident recently charged with a crime. The manager also wished to know if they could have access to the police reports. They were referred to a different department at APD.

12:30 p.m.: An AT&T electrical box was reported open on East Hadley Road. The box appeared to have been blown open by the wind. The door was re-secured and the DPW was notified, as it was at a DPW work site.

1:24 p.m.: At the Unitarian Meetinghouse at 121 North Pleasant St., a reporting party stated that an older white female wearing a black jacket and jeans verbally accosted her about 20 minutes prior. The party had seen the woman before and understood that she had mental health issues but was concerned that the woman had been making comments about the reporting party’s ethnicity.

1:50 a.m.: A dog at 35 Potwine Ln. was running loose. The owner of the dog was advised of the consequences of letting her dog run loose.

2:40 p.m.: The operator of a brown 2013 Honda Civic drove through the bay door at Ren’s Mobil, 161 North Pleasant St. The operator then had her car’s battery replaced and advised that her father would pay over the phone. Ren’s advised that this was not possible, and that they needed a credit card in hand. Ren’s did not want to press charges, just asked if APD could make contact with the woman and give her until next week to pay the $188.43 she owes. The officer attempted to make contact with the woman at her listed address and did not receive a reply.

4:40 p.m.: Contact was made with the involved party from the above narrative. She was advised that she had a week to pay Ren’s or she will face possible criminal charges. She stated she understood and was working on obtaining the money from her mother.

6:20 p.m.: A white 2016 BMW X5 was reported on East Pleasant Street having trouble maintaining its lane and had no lights on. UMPD was notified because it went onto the University of Massachusetts campus in the area of Orchard Hill Residential Area. The vehicle was gone upon arrival and UMPD was notified.

10:08 p.m.: A party came into the Amherst Police Department to report a past hit and run motor vehicle crash that occurred on Tuesday, Feb. 25, sometime between 2:20 p.m. and 2:50 p.m.in the parking lots of Emily Dickinson Hall and Franklin Patterson Hall at Hampshire College. The party reported that her black 2015 Ford Escape was parked in the lot at the aforementioned time when she observed rear impact damages to the tailgate. A circular impact could be seen, as well as scrapes where the paint was peeling off. A utility vehicle was suspected based on the height of the damages. She was advised that she needed a report from the police department for insurance purposes and that APD would document the crash, however Hampshire College Security investigates motor vehicle crashes on their campus. Hampshire College Security was contacted and advised the same. No video surveillance equipment monitors their parking lots.

10:12 p.m.: There was a male party in a green reflective jacket reported in the area of Harlow Drive walking back and forth. He was visiting his parents on Ridgecrest Road and was out for a run.

1:10 a.m.: At Fort River School at 70 South East St., a white 2014 Nissan Altima was stopped for a stop sign violation. The operator, a 23-year-old Amherst male, was found to have a suspended license and was placed under arrest for failure to yield, operating a motor vehicle with a suspended license and operating a motor vehicle without possession of a registration. APD waited for the individual’s mother to get the vehicle.

7:29 a.m.: A red 2012 Honda Accord was stopped due to the left brake light being out at 58 College St. The registered owner was operating the vehicle and advised that she had an appointment to get it fixed that week. A verbal warning was issued.

1:14 a.m.: At 65 University Drive, a combative patient was reported in an ambulance. The individual was thrashing and did not strike any AFD personnel. However, the patient did require a handcuff and restraints to keep him still. No charges were filed.

1:54 a.m.: APD spoke with staff at The Spoke at 35 East Pleasant St. to see if they had security camera footage in the back parking lot that may have caught a windshield being broken. Staff stated that they only have interior cameras.

2:19 a.m.: A reporting party stated that he lost someone near 31 Phillips St. She was an 18-year-old female with blonde hair who was about 5-foot-3 and weight between 110 and 115 pounds. She was wearing a pink crop top, ripped blue jeans and white shoes with red bottoms. She did not have a cell phone with her. The UMPD was out with the female on their campus and had her in protective custody. She had been found stumbling around campus earlier in the night.

2:55 a.m.: At 780 Riverglade Drive, a reporting party stated she was awoken by a male yelling and slamming sounds coming from the apartment above hers. She also heard another voice but was unable to tell if it was male or female. The resident was intoxicated and upset over the Chinese government. He was advised to keep his voice down.

8:34 p.m.: At 159 Summer St., a reporting party stated there was a loud bass coming from an apartment. Multiple noise complaints had previously been made from the location, mostly unfounded. The music was completely reasonable and it was an unfounded complaint. The involved party was advised of the complaint.

7:13 a.m.: APD conducted a search for an illegal item at 81 Belchertown Rd. Officers checked the surrounding area, under bushes and around trees but there were negative findings. The search was part of an ongoing investigation.

11:36 a.m.: At Amherst House of Pizza at 17 Montague Rd., a reporting party was advised by a customer that a blue 2013 Toyota Prius had driven into the door. The operator did not appear to be injured. The door was intact and there was no apparent masonry damage but there was minor damage to the glass portion of the door. The operator was waiting to pull into a parking space, saw a vehicle moving fast into the parking lot and pulled forward to avoid a collision and struck the front door. The owner of the business swept up the broken glass, locked the door so it was not used by patrons and attempted to inform the building owner.

3:06 p.m.: At the Subway at 4 Main St., a blue 2017 Subaru Legacy was backing into a parking spot when a black 2011 BMW X3 drove around it and proceeded to turn right without yielding. The BMW side swiped the Subaru and there were minor scratches on both vehicles. A motor vehicle exchange form was completed.

1:10 p.m.: Leverett Police Department was trying to catch up to and pull over a gray BMW with black tinted windows on Route 63 in their town. Leverett PD gave up around the “Mitchell Sign” and contacted APD. An area search near 150 Montague Rd. was negative.

5:05 p.m.: At 1039 North Pleasant St., a reporting party stated there was something long and gray hanging off of a utility pole and it was unknown if it was electrical equipment. It appeared to be some sort of box that was detached from the pole. There were no wires hanging and the box was not close to the ground. The attached part remained secure. Dispatch was advised to contact Eversource about the pole.

12:42 a.m.: At 593 Main St., a black 2017 GMC Sierra was stopped after a random query of the plate showed that it was expired. The motor vehicle was being operated by a sober female driver. The front passenger advised it was his motor vehicle. The citation for an expired registration was issued to him as it was his responsibility to be aware of the status of his vehicle. The motor vehicle was towed by Ernie’s Towing back to his residence. He was advised to renew the registration before operating again.

1:26 a.m.: A gray 2012 Honda Accord was stopped at 397 Northampton Rd. after APD ran the registration number which incorrectly showed that the inspection had expired. There was no issue.

1:28 a.m.: A gray 2017 Toyota Camry at 56 South Pleasant St. was seen with a headlight out. The operator stated that he was aware and tried to fix it before. A verbal warning was issued and the operator stated he would continue to fix the problem.

10:34 p.m.: A verbal warning was issued to the operator of a white 2008 Chevrolet Silverado for a crosswalk violation at 457 Main St.

1:14 a.m.: At 280 Lincoln Ave., a 911 caller reported someone was frantically ringing her doorbell and she was unable to see the person or get a description. During the call, the doorbell stopped and the party may have left. APD checked the yard and surrounding areas and nobody was present. APD spoke with the resident who advised it was likely a drunk college student at the wrong house, as they rang the bell many times but did not attempt to get in.

1:26 a.m.: At 166 Lincoln Ave., a red 2015 Subaru Outback was in the driveway with the driver’s side door wide open. The keys were in the center console and it was unclear if anything was taken. Somebody suspicious in the area could have opened it. APD attempted to make contact with residents and were unsuccessful. The door was secured.

12:30 p.m.: At 1040 North Pleasant St., a reporting party stated that there was a vehicle parked in the visitor’s lot closest to the pool and that its alarm had been sounding intermittently for the last two hours. APD was unable to assist.

1:55 p.m.: At 497 East Pleasant St., an individual reported that her boyfriend took her medication without her permission. The boyfriend denied ever doing it. There was nothing further that APD could do to assist her.

7:32 p.m.: At the Big Y at 175 University Drive, a reporting party stated that a male party was causing a disturbance in the food court. He stated that the male party was “freaking out” and described the individual as a white male who was approximately five-foot-six, 110 pounds and had long brown hair and was wearing a green shirt and shorts. Officers located the involved party inside the establishment and spoke with staff who said that he had spoken with them and ordered and paid for food, noting there were no issues. The involved party declined to speak with officers. The involved party had spoken with officers a few days before and was processed through the East Hampshire District council and released. The reporting party was not present at the location to speak with officers.