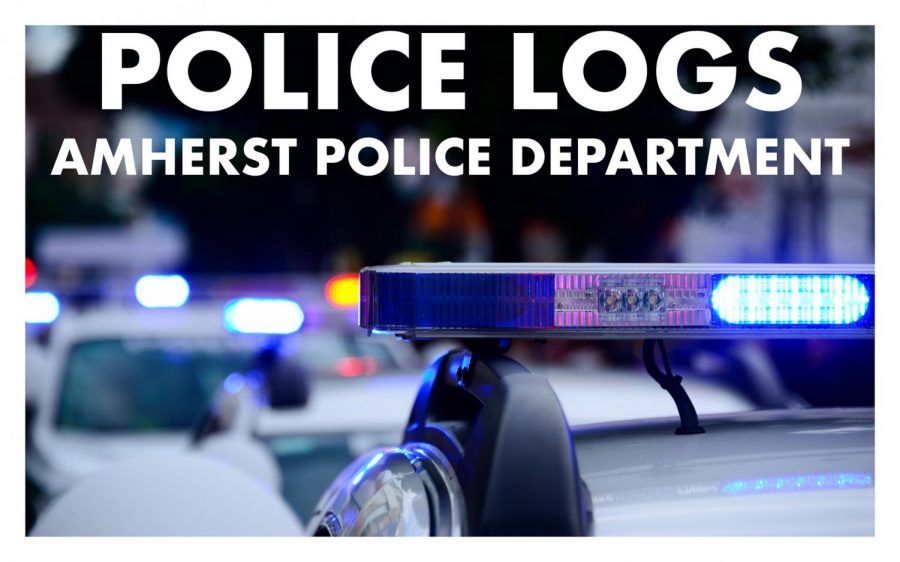 By Kathrine Esten, Will Mallas, and Ana Pietrewicz

1:37 p.m.: At the Big Y at 175 University Drive, APD met with the store manager and he completed a trespass notice for an involved party. He stated he would send the notice via certified mail.

1:40 p.m.: APD attempted to speak with the suspect of an attempted shoplifting at their home at Mill Hollow at 149 Summer St. The involved party was not home during the attempt to contact them.

1:44 p.m.: A reporting party near the Alpha Sigma Phi house at 374 North Pleasant St. advised of loud music. An unknown person was blaring loud music from a third floor window facing Fearing Street. When APD arrived, the music was turned off and they were unable to identify the involved party.

6:07 p.m.: Loud music was reported from a Puffton Village apartment at 1040 North Pleasant St. An officer called the reporting party and the situation was resolved.

1:54 p.m.: At Antonio’s Pizza at 31 North Pleasant St., a reporting party requested police assistance moving four individuals away from the front of the store. He stated they were three males and one female. He believed one of the males was intoxicated and one was messing with the trash can outside. The involved parties were asked to leave the area after the complaint was explained to them.

4:40 p.m.: A reporting party called from Craig’s Place at 434 North Pleasant St. to report that an involved party had been harassing one of his female employees. He inquired about trespassing the involved party from the homeless shelter, and an APD officer told him how he could go about doing this. APD reached out to the female employee who was unaware that the reporting party was going to call APD about the issue. She stated that in previous instances, the involved party had approached her car at her apartment in the center of town and again while she was stopped at the intersection of North Pleasant and Amity. She stated that she just drove away from him and did not want APD to reach out to the involved party. She wished to handle the matter on her own by speaking with the involved party, and APD advised her that they would document the situation in case things escalated.

7:14 p.m.: At Russell’s Liquors at 18 Main St., a reporting party stated there were three or four people sitting outside asking for money. He stated they also had open containers and were playing loud music. The area was checked and the parties were gone upon arrival.

3:59 p.m.: At the Cumberland Farms at 35 Belchertown Rd., a reporting party was yelling at people and seemed intoxicated. He was described as a white male with a white beard, and he was wearing shorts. The individual was located behind the dumpsters and was advised not to harass the public. The management of Cumberland Farms did not wish to have any action taken against the involved party at that point.

4:42 p.m.: A reporting party called to report that her phone, debit card, AAA card and license were missing from her work at the Atkins at 1150 West St. The cards were stored in a pouch attached to her phone, and she stated that between 3 p.m. and 3:30 p.m., she purchased an item at the customer service desk and left her phone on the counter. When she realized she left it there some time later, it was gone. She stated that she could not find it anywhere but that she was not completely sure if it was stolen or set aside by another employee. She also stated that she has no way to track it and contacted the bank about her debit card. APD told her she could contact the RMV about her missing license and retrieve a new one through their website. APD asked her to look at the camera footage to see if it was stolen and contact APD again. The reporting party later advised that her items were found in the seat of her delivery truck.

4:47 p.m.: A party had been causing issues at the Cumberland Farms at 35 Belchertown Rd. for the past couple days, and a caller wanted him trespassed from the property. The individual was issued a trespass notice, which was explained to him, and he understood.

5:59 p.m.: The individual from the above report had returned to Cumberland Farms at 35 Belchertown Rd., and a reporting party wanted him trespassed.

7:41 p.m.: A party on a black 2013 Harley Davidson FLTRU motorcycle was going through the Triangle Street rotary. The motorcycle’s rear tire kicked out on a patch of sand, causing the operator to dump the bike. There was damage to the left side of the bike.

8:10 p.m.: A 911 hang up call was made from a residence on South Prospect Street. An officer called back and spoke with a male party who stated there was no emergency, it was a pocket dial.

11:57 p.m.: A reporting party stated there was an intoxicated male inside their residence on Railroad Street. The involved party was extremely intoxicated and was escorted out of the residence without incident. The party stated he was drunk and “joking around.” He was transported to APD to wait for his mother to pick him up in the lobby.

9:40 a.m.: Amherst Fire Department stated there was some sort of verbal argument outside of The Works Cafe at 48 North Pleasant Street. The argument was between two male parties with one wearing a grey sweatshirt and black backpack. The situation was cleared.

1:54 p.m.: A party donated five one-gallon bottles of cleaning products to APD. They were placed in the cell block cleaning closet.

2:10 p.m.: A reporting party stated a husky puppy was loose around East Pleasant Street and Grantwood Drive. The husky was described as brown in color with a collar. The puppy was gone upon arrival to the area.

5:36 p.m.: A 911 call from 295 Amity Street was abandoned. An officer called back and spoke to a male party, who stated it was accidental.

7:52 p.m.: A reporting party stated he received a strange text on his cellphone today that his account and cloud were being deactivated. He went to Verizon.com and observed that his phone number was deactivated, but three others on his family plan were still active. He spoke with a Verizon technician, and they stated the phone number was activated on another device in Leominster. Verizon states they need a police report to conduct further investigation on their end. He was advised to contact the Attorney General’s office because he believes his identity was stolen.

8:51 p.m.: A reporting party at Mill Valley Apartments stated she could hear someone in the next door apartment possibly getting “beat up.” She does not hear voices or yelling, just things dropping on the floor above her. An officer spoke with the reporting party, who advised she heard something get dropped and dragged upstairs. She was unsure if someone was moving furniture or getting beat up. Two officers spoke with the residents of the upstairs apartment, who were actively doing laundry in the area where the reporting party heard the noise. The officers confirmed there was no disturbance, and the noise in question was the residents doing laundry.

11:46 p.m.: A reporting party stated she could hear loud music playing from 704 Main Street. The radio could be heard outside the door and three individuals inside were playing Monopoly. The resident was issued a verbal warning. The resident was cooperative and agreed to turn down the music.

4:00 a.m.: Loud voices were reported coming from an apartment in the area of 1001 North Pleasant St. There was no noise found at the listed address and the apartment was dark. The area has a history of unfounded complaints.

7:33 a.m.: A reporting party from Amity Street called to see if officers found his table.