Around Hockey East: A lot to play for with a week of games remaining

Only BC has locked up seeding 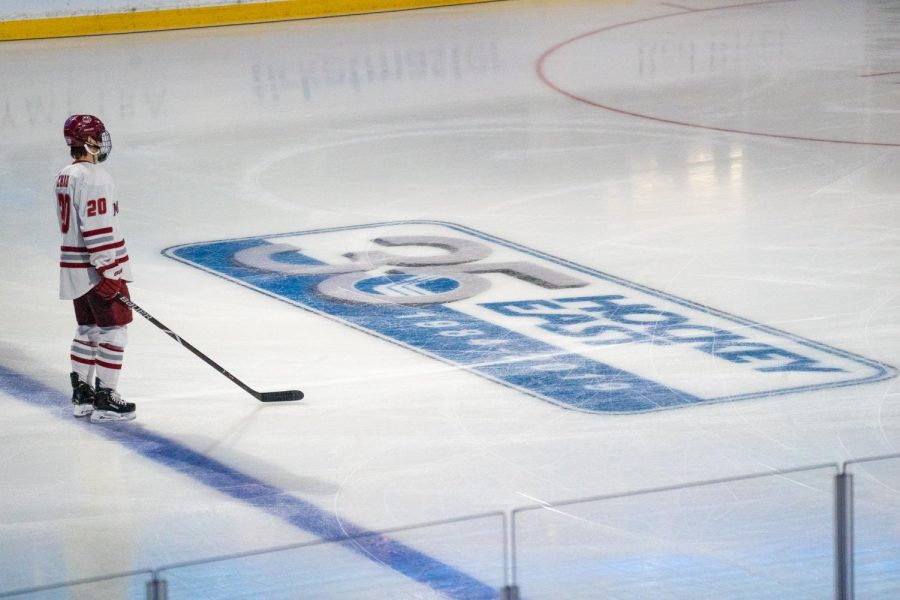 Just one week remains in the 2019-20 edition of the Hockey East regular season. Boston College has already clinched its 17th regular-season championship, but the rest of the playoff slate has yet to be decided.

A few big series remain to determine how the playoff picture will shake out with a battle for the final few spots still underway. Without further ado, let’s take one last look around Hockey East.

It’s already been established that BC has clinched the one seed in the Hockey East tournament. On top of that, the Eagles are a lock for the NCAA tournament at this point in the year. It remains to be seen what Jerry York plans to do with his lines with so little to play for against UNH this weekend, but the series has big implications for the playoffs, nonetheless.

UMass has one game left against Vermont this Thursday. A single point would be enough to lock up the two seed. While Vermont has struggled mightily this season, it’s playing its best hockey of the season to close things out. The Minutemen can only fall as far as third, so the result itself won’t mean as much as maintaining momentum heading into postseason play will.

A single game against fourth-place Connecticut to close out the River Hawks’ season means UML fans can expect a lot of movement based on Friday’s result. The River Hawks could finish anywhere between third and sixth, so with staying within the top four and hosting a playoff series being the primary priority, beating a red-hot UConn team is all that they can control.

The Huskies sit right on the edge of having the home-ice advantage as things stand. A win over Lowell would guarantee home ice and the three seed. If they drop a point, however, things will get interesting and it will come down to Maine and Boston University to see where UConn lands.

With one game left against Providence, the Black Bears’ hopes for a home quarterfinal series are still alive—albeit with the help of UMass Lowell. With a 12-1-3 record at home, Maine surely hopes UConn loses so that it doesn’t have to travel to the XL Center for an opening-round series.

BU has a nine percent chance at leapfrogging Maine and UConn for the fourth seed but also has a three percent chance of missing the playoffs altogether. Both results are highly unlikely, but with a game in hand on the teams on either side of them, the Terriers could move up or down a spot after their series with Northeastern.

The Friars will travel to Orono on Friday with hopes of officially punching their ticket into the Hockey East tournament. While Providence is practically a sure thing to make the Hockey East playoffs, its NCAA Tournament chances are sitting at just 21 percent and a win over No. 15 Maine would go a long way in improving those odds.

Last week, I dared make the claim that Northeastern wouldn’t drop below the eighth seed. A sweep at the hands of last-place Vermont made that situation far more likely entering the final week of play—11 percent according to PlayoffStatus.com. The Huskies hold just a one-point edge on New Hampshire heading into their series with BU. With UNH facing off with BC, they might have a little wiggle room but only two wins will officially guarantee them a playoff berth.

UNH has been sitting just on the outside of a playoff spot for weeks now. They failed to take advantage of Northeastern getting swept last weekend when they managed to take just one point from UML. Now, they will probably need to sweep BC to extend their season. While BC has everything locked up as the one seed, even a subpar Eagles lineup could give the Wildcats fits.

Merrimack’s 2019-20 season came to a close last week with a loss to BC. There’s not a whole lot more to say about a nine-win team, but I’d like to note the Warriors ranked 60th—dead last—in the country in save percentage. If Merrimack can stop a few more shots next year, perhaps they can challenge for a playoff spot.

Vermont had a disappointing season, to say the least. They are, however, doing an excellent job of playing the role of spoiler to the rest of the conference. Six of the Catamounts’ eight Hockey East points this season have come in the past two weekends. They’ll have one last chance to cause some trouble when they take on UMass on Thursday, unbeaten in their last three games.