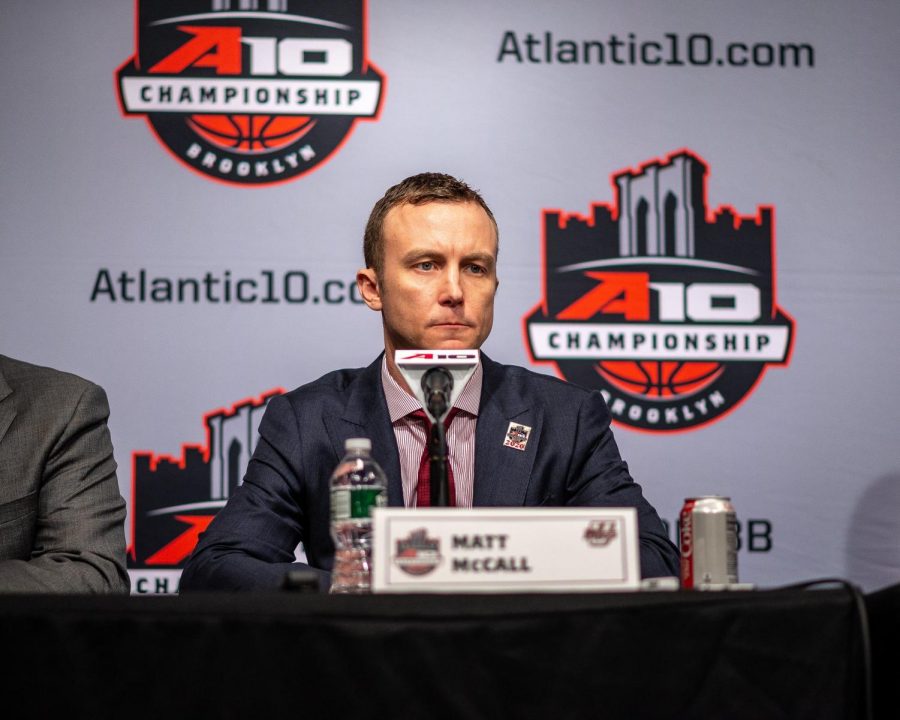 BROOKLYN, N.Y —Just minutes before the Massachusetts men’s basketball team was set to tip-off against Virginia Commonwealth in the first round of the Atlantic 10 men’s basketball tournament, Matt McCall had to take a phone call.

With a phone still to his ear, McCall waved his players back toward the bench, and eventually off the floor — as the second round was about to begin, the A-10 tournament was cancelled, bringing UMass’ season to an abrupt end as COVID-19 concerns has cancelled major conference tournaments all over the country.

“Our guys are disappointed,” McCall said. “They wanted to play, there’s nothing like playing in the tournament in the Barclays. It’s a great venue, and there’s nothing like tourney time, but we fully respect the league’s decision and again give Bernadette and her entire staff and all the athletic directors a tremendous amount of credit in how they handled this, because I know it was moving fast and there was a lot of decisions that had to be made very, very fast.

“I think everybody wanted to play because our guys are competitors, and I’m sure VCU is the same way, they wanted to play the game. Even in the locker room you hear some comments of ‘let’s go out to the blacktop and play the game, let’s go play it outside.’ Because they’re competitors. I was trying to get them, as we got off the bus, just stay off your phone as much as you could just to focus on the game.”

The A-10’s announcement came immediately following the Minutemen taking the floor with just minutes remaining before the 12 p.m. tip.

“It was a very difficult decision,” said A-10 Commissioner Bernadette McGlade in an impromptu press conference Thursday. “You can probably hear that in my voice. We’re in very uncertain times and very challenging times, and the situation that has developed, especially so rapidly with the information and news that we’ve been receiving from all of our advisory boards and experts across the country regarding the coronavirus made this a decision that was really one that we had to make.

“The decision to stop play, to do our part to be able to get through this period of time, is something that we had to do.”

Rhode Island Athletic Director Thorr Bjorn spoke on behalf of his colleagues around the conference at Thursday’s press conference.

“This has been a very quick process, a very quick discussion because things were changing so rapidly,” Bjorn said. “But at the end of the day, without exception, the benefit and the health and safety of our student-athletes, fans, coaches, family members, is the most critically important aspect of our jobs.

“Disappointed for our student-athletes not being able to participate in this incredible experience, that’s certainly something we feel bad about; but at the same time, there was no other decision.”

UMass Athletics also announced that it would be suspending all travel for varsity teams beginning on Thursday.

“I told our team when we got into the locker room after the floor was cleared that 10 years from now, they’re going to remember exactly where we were when this happened,” McCall said. “As a coach, last night, as this unfolded — it seemed like over the last 48 hours, it happened so fast. You don’t sleep much the night before a game anyway, you’re trying to fill out your play card, and how we’re going to attack VCU’s press and things like that, and it seemed like every 30 minutes I was checking my phone or checking Twitter to figure out if this game would be played.

“We fully respect Bernadette and the Atlantic 10’s decision, and throughout this entire process they’ve made sure that our student-athletes are at the front and their well-being is the most important thing.”

“I thought coach Rhoades had a great idea,” McCall said with a laugh. “He said, ‘let’s just me and you play one-on-one in our suits. Battle it out that way.’”

The Collegian’s Javier Melo contributed to this report.

Amin Touri can be reached at [email protected], and followed on Twitter @Amin _Touri.