Zoë Kravitz takes the lead in this modern adaptation of the best-selling novel and cult classic film. 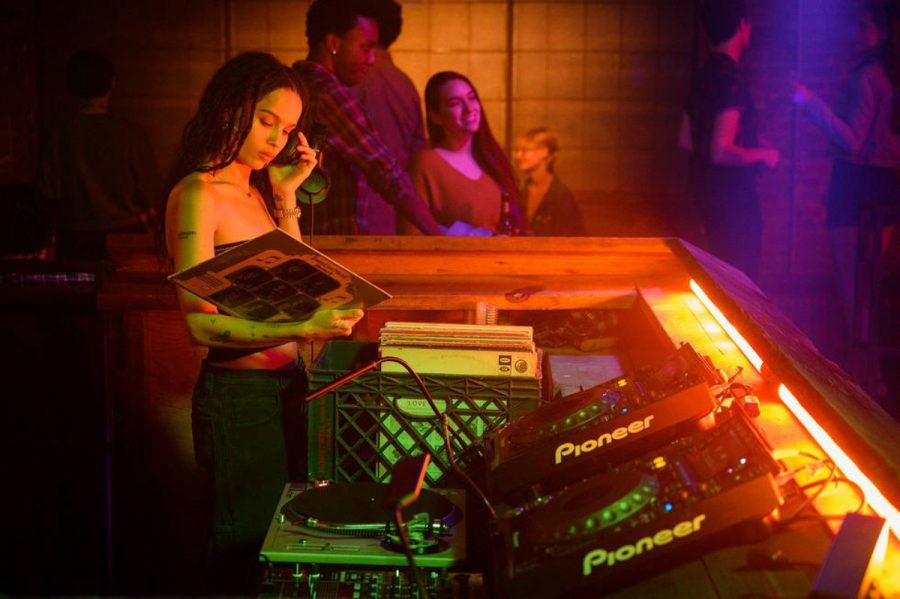 “High Fidelity”, a best-selling novel written by Nick Hornby in 1995 and a cult-classic 2000 film with John Cusack, is returning for its latest iteration on Hulu. The 10-episode series was released on Feb. 14 and presents an updated, gender-flipped version of this well known and loved plot.

The plot is that of a self-obsessed, commitment-phobe record shop owner named Rob (Zoë Kravitz) who is obsessed with music, popular culture and the past. She recounts her “Top 5 All-Time Most Memorable Heartbreaks,” teaching us the valuable lessons of how to make the perfect mix-tape. The show also features an excellent use of breaking the fourth wall to deliver intimate and compelling thoughts which allow us to not only get to know Rob better, but make us aspire to be her.

This interpretation sees a more updated and relevant version than the previous film, with Kravitz being a female, mixed race, bisexual protagonist. The record store is now based in Crown Heights, Brooklyn and the supporting cast is full of life, quirks and character. Rob’s colleges and best friends are now Cherise, a black woman who wants to make music, and Simon, an ex-lover of Rob’s who comes out as gay while the pair are dating. The music of both the show’s soundtrack and the pieces discussed are updated – now it not only discusses the influences of Bowie, Prince and Fleetwood Mac but also OutKast, Nina Simone, Aretha Franklin and Frank Ocean. All of these factors update the previously male dominated plot and musical space.

Kravtiz plays Rob well. She is able to use her own lifestyle to perfectly articulate the cool-girl aesthetic that Rob portrays on screen. From the use of Rob’s clothes, drinking of whiskey neat, smoking both cigarettes and marijuana, her apartment full of records, her tattoos and her cold and yet calculated demeanour, Kravitz is able to present the effortlessly cool music enthusiast who is sharp and dry but also self-centred and lonely.

The whole point of the show is to reveal the crumbling state of Rob due to her still being heartbroken after the breakdown of her engagement one year prior. We see Rob attempt several relationships during the ten episodes, beginning with Clyde (Jake Lace), the almost boyfriend who is far too nice for Rob to treat right. Next is Thomas Doherty’s character (played by Kravitz’s mother in the 2000 iteration), a young musician with whom Rob becomes infatuated. However, nothing can fill the void of the relationship she had lost. The first half of the show focuses on the “Top 5 All-Time Most Memorable Heartbreaks” of Rob, which lays the groundwork for why she is so damaged and selfish. However, the show is able to explore more of the original novel’s plot points than the film version ever did. We not only see these different relationships but how they made Rob who she is today.

There is a fun one-off story about Rob being offered a priceless record collection from an Upper-East side artist bent on upsetting her husband for only $20, which reveals a lot about Rob’s conscience. This leads to Rob and Clyde trying to find the husband only for him to be worse than they imagined, portraying a crucial scene for the series as a whole. This sub-plot was lost in the film version, but is vital both within the novel, as it allows for us to see Rob as a better human being. Within the TV series, this sub-plot is essential as it questions the ability of women to not only know about music but to have opinions that are worth hearing. This is something that Rob has to prove, leading to an impeccable array of musical knowledge. However, it is important to remember that this is a modern interpretation in which Kravitz is re-imagining a male orientated story, rather than presenting a completely new story which explores women and their relationship to heartbreak and music. As the show states, “It’s so badass for you to not only occupy but freaking own such a historically masculine space.”

The second half of the show explores why Rob cannot commit to those who care for her the most and how she becomes so self-involved. She is unable to remember what’s going on with her friends, wallows in her own self-pity and become obsessed when her ex-fiancée moves back to the neighbourhood with a new partner. This pattern does begin to wear a little thin. As a viewer who watched all ten episodes in quick succession, you do begin to become disillusioned with Rob’s selfish demeanour and inability to consider anyone other than herself. Although the show does offer signs of self-improvement for Rob, as she learns to accept her heartbreak and realizes that her selfish actions have pushed people away and that she must recover.  It’s easy to feel for Rob and want her to get her life back together so she can allow herself the chance to find love once again.

Overall, Hulu’s “High Fidelity” is an excellent version of both the 1995 book and the 2000 film. It nicely updates the older version for a more open minded modern interpretation without losing any of the pretentiousness that made it so iconic in the first place.