‘I want one of them to get hot’: UMass faces tough choice of picking a starting goalie for the playoffs

Murray, Lindberg have split the net for the Minutemen this season 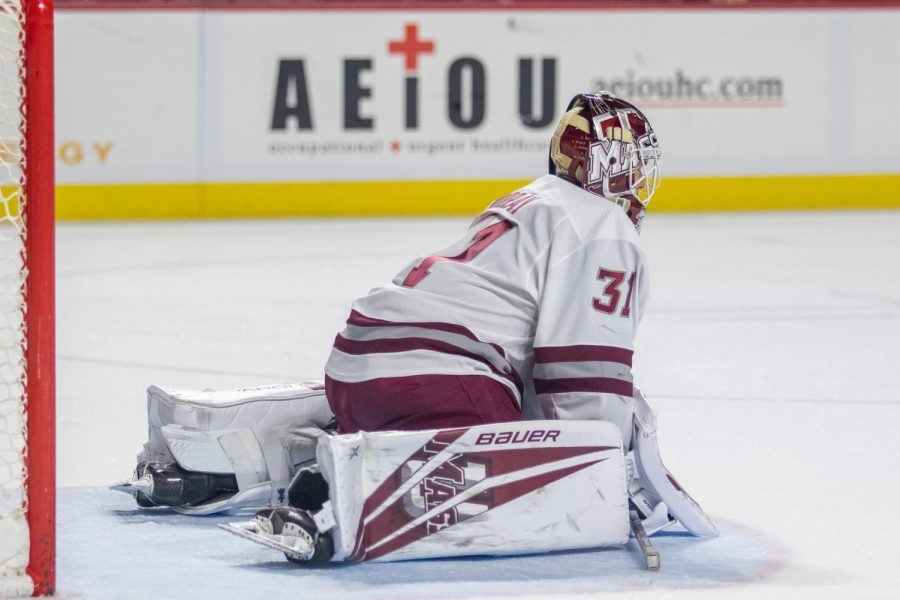 Here we are. One game left in the regular season and the Massachusetts hockey team embarks on what the Minutemen hope is a long run into the Hockey East playoffs. Then comes the national dance.

We know they’re injured. We know John Leonard’s scoring all the goals. We know Mitchell Chaffee is “likely” for Thursday’s finale against Vermont. We know they’ll be playing their Hockey East quarterfinal games at Mullins.

We do not know who the starting goalie is.

And it’s not a bad problem to have for UMass. It’s not like it has two guys who haven’t been good enough to claim the net — Matt Murray and Filip Lindberg have thrived this season, neither ever pulling away from the other.

“I think we’re super lucky that we have two very talented goalies,” assistant coach Jared DeMichiel said. “Definitely the keys to it are they both push each other, there’s a lot of competitiveness. At the same time too with them going back and forth, they both should be fresh. So, when they get the start, they should be able to throw the kitchen sink at every single game and find ways to make big saves.”

The tandem boasts elite goals against averages – Lindberg’s 1.91 ranks sixth in the country and Murray comes in right behind him at 1.97, good for eighth. Their save percentages are where there’s a bit more of a difference, as Lindberg’s .927 beats Murray’s .915. Both are still really good numbers.

Even though Lindberg’s overall numbers are a bit better, it still doesn’t make the starting job clear because both goalies have constantly alternated who takes the net on any given night. When one struggles, the other struggles. When one gets hot, the other gets hot. In some ways, they’re almost mirror images of each other.

The perfect example of this was the past two weekends. Lindberg was pulled against UMass Lowell after allowing two goals on two shots (the second goal and shot were eventually taken off the board). Murray followed it up with an average clean-up job in relief and a mediocre start the next night.

Carvel called out the goalies the following week and both put up almost identical, solid performances against UConn this past weekend.

“I would say fine,” DeMichiel said of their performances against UConn. “We talked to them this week like we’re never going to be okay with giving up a lead in the third period. If we have a lead, the game should be dead as a doornail. We should find a way to win that game, so I thought they played fine.”

Now is the time of year in which they’ll have to name a starter at some point. As great as two-goalie tandems are, it’s extremely uncommon to see a team use two goalies in the playoffs. After all, there is only one net.

“I want one of them to get hot,” Carvel said. “Make it a real easy decision for me and they made it a tough decision at Lowell because neither of them played well but last weekend they both played better. They still can be better.”

This isn’t just a sentiment felt only by the coaching staff. The goalies also feel the heat of the impending decision of who will be the horse UMass rides during the postseason.

“Yeah, there’s definitely that pressure,” Murray said. “I guarantee if you ask Fille or myself, it’s we want to be that guy. In playoffs, who knows what’s going to happen.”

Carvel usually differs to DeMichiel, a former goalie at RIT, on picking the starting goaltender for each game. The head coach’s only real goalie rule is simple: three goals and you’re gone.

But DeMichiel didn’t seem to have a plan for the playoff goaltending situation quite yet when asked after Tuesday’s practice.

“I hate to Belichick you, but we’re literally just looking for the next day, focused on the next game and stuff like that,” he said. “We don’t want to get too far ahead of ourselves.”

Fair. It’s hard to assume the UMass coaching crew would have the goaltending all planned out when Lindberg and Murray are as neck and neck as they are with one regular season game left to play.

So, maybe a better look into what Carvel and company might do is by peering into how DeMichiel recommends who he thinks should start on any given night.

“It’s a mix of things,” the goalie guru said. “It’s a mix of how the guy played his previous game, it’s a mix of how he’s playing in practice – his demeanor, his confidence. Carv’s awesome about that, but we talk as a staff. I talk to Carv, I talk to [Ben Barr]. I’ll ask their opinion. Ryan Bliss as well too. We sit down as a staff every single day.”

Alright — that’s a bit more to go off of. It’s hard to speak to Lindberg and Murray’s confidence and demeanor. It’s also difficult to evaluate their overall play in practice.

What is much easier to go off of is their play of late, specifically the second half. Here’s how Murray and Lindberg’s numbers break down since UMass travelled to Denver back in January.

Lindberg’s clearly been better, at least statistically. But in his last eight games, he’s been pulled twice – once in that loss to UML and then back in January when he gave up three goals on seven shots in an eventual loss to BC. Murray has been a bit more consistent. Both have the credentials to be “the guy” for a playoff run.

But if there’s one thing for certain, it’s that after last year’s magical run, getting the nod in the beginning doesn’t automatically guarantee you’ll be there in the end.