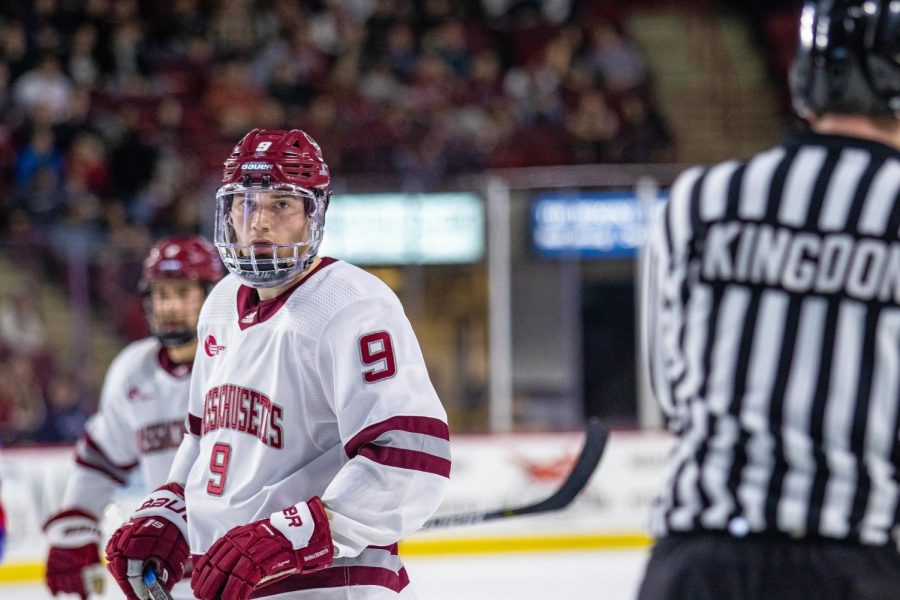 University of Massachusetts junior forward John Leonard has agreed to join the San Jose Sharks, the organization announced on Tuesday, foregoing his final season of collegiate eligibility in the process.

Leonard — a sixth-round draft pick in 2018 — was selected 182nd overall by the Sharks following his freshman campaign; the first Minuteman to do so since current-NHLer Justin Braun did so in 2007.

“John is a high-end shooter who is creative with the puck,” Sharks General Manager Doug Wilson said on Tuesday. “He took big steps in both his fitness level and all-around game and became one of the most dominant offensive players in college hockey this season. We are excited to see his continued growth as a member of the Sharks organization.”

In three seasons at UMass, the Amherst native and 2020 Hobey Baker Top-10 Finalist recorded 105 points in 106 games on 56 goals and 49 assists and played a monumental role in helping shift the program’s culture. As a junior, he led Hockey East and the NCAA in goals with a career-high 27 and also led the Minutemen in scoring with 37 points.

“John Leonard grew tremendously as a hockey player this past season, becoming the top goal scorer in the country, and put himself in a position to sign with the San Jose Sharks,” UMass coach Greg Carvel said in a statement released by the university. “John has been a critical piece in the development of our hockey program and our culture. His growth as a player mirrored the growth of our team and we are excited to watch him play in the NHL with three other UMass players who came to campus at the same time. Cale Makar, Mario Ferraro, Mitchell Chaffee and John Leonard were all part of our first recruiting class and, after three years, they are all signed to NHL contracts. John is an elite goal scorer and we are excited to cheer him on and watch him score goals at the next level.”

Leonard, 21, was one of just three NCAA players to record multiple hat tricks in the 2019-20 season that was cut short due to COVID-19. Additionally, he led Hockey East with six game-winning goals.

For his standout efforts as a junior, Leonard was selected as a Hockey East First-Team All-Star.

With his decision to sign, Leonard joins senior Jake McLaughlin (VGK) and junior Mitchell Chaffee (MIN) as recent Minutemen that have signed contracts since the season came to an abrupt end.

Awaiting Leonard in San Jose is former Minuteman teammate and roommate — and current Shark — Mario Ferraro. The duo spent two years together before Ferraro set out for the professional ranks last April following UMass’ run to the Frozen Four.