John Leonard is making a case for Hobey Baker 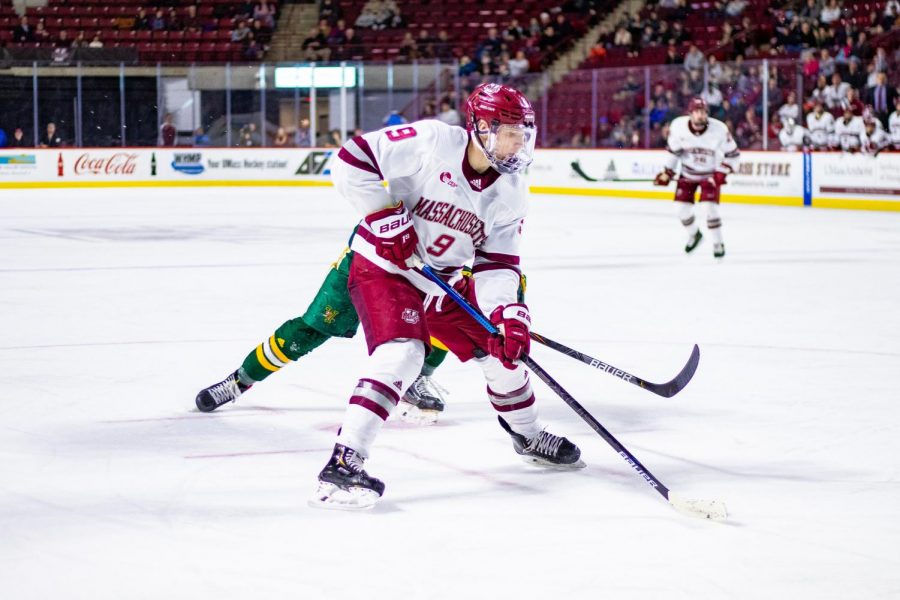 When January came to a close, John Leonard had just been benched for the back half of a series with New Hampshire, was tied for 77th nationally in points and was nowhere near the top of anyone’s Hobey Baker rankings.

Six games and 15 points later, the junior winger was a legitimate threat to win college hockey’s most prestigious individual honor.

“I hope he starts getting some buzz about Hobey Baker,” coach Greg Carvel said following Leonard’s Feb. 22 hat trick against UMass Lowell. “I obviously don’t know the whole country, but I don’t know how many kids can affect the game like that.”

The Amherst native has started to earn buzz and is making a case for voters to give UMass its second Hobey Baker in as many years.

For starters, Leonard has built a four-goal lead atop the NCAA goal-scoring leaderboard and climbed his way to 18th nationally in points.

While Leonard’s gaudy scoresheet numbers qualify him for a ‘seat’ at the proverbial ‘table’ of players in discussion for postseason accolades, its his significance to the Minutemen that gives an argument for him taking home the Hobey Baker credence. He’s tied for the nation-wide lead in game-winning goals after all, a testament to his knack for scoring clutch goals.

“I think I’m just playing with the right guys right now,” Leonard said. “I think we’re clicking as a team and we’re playing a good brand of hockey.”

The first of last month’s game winners came as part of a hat trick that helped the Minutemen complete a sweep of the then-No. 10 Friars.

A week later, Leonard once again rescued UMass. After coughing up a two-goal lead in the final frame, the junior took matters into his own hands, completely undressing a River Hawk defender before depositing the go-ahead goal, only to be followed shortly by an empty netter to complete another hat trick.

Then, against UConn, the Minutemen’s third period struggles reared their ugly head once more as they surrendered three goals. Luckily for UMass, Leonard was in front of the net to put home a rebound and grant the Minutemen sole possession of second place in Hockey East.

Leonard’s hot hand couldn’t have come at a better time for UMass. The team lost forward after forward to injury over the same stretch, not least of which was second-leading scorer Mitchell Chaffee. All the while, Leonard kept notching key goals and assists—playing a hand in 15 of his team’s 21 goals in the month of February.

If the Minutemen didn’t have No. 9 to come through late in games, who knows how their season might look right now. In games where Leonard’s found the back of the net this season, UMass has gone 13-5-0. That’s a far cry from its 8-6-2 mark when he goes without a goal.

Leonard is also the only top-five goal scorer playing for a team ranked in the top 30 of Pairwise, meaning he’s the only one sniffing an NCAA Tournament bid—barring an unexpected conference tournament run by goal scorer Nos. 2-5’s team’s.

While Leonard’s best known for his ability to make goalies look silly, in the season’s second half, he’s rounded out his game to include a plethora of assists. Out of his 10 assists in the 2019-20 season, five of them came over UMass’ last seven games as the team battled for home ice and seeding.

“I teased him a little bit about distributing a little,” Carvel said, “and now he’s starting to add on the assists.”

“Niko [Hildenbrand] and [Bobby] Trivigno I’m playing with right now and they both have the ability to finish,” Leonard said. “We’re looking to get the puck to each other as much as we can and create offense.”

While Leonard’s stats alone might not be enough for him to win the coveted hardware—there are players with more points and plenty of more assists—his chances lie in his ability to impact a game. After all, how many players in college hockey can illicit the kind of reaction Leonard does from teammates.

“I’ve seen him do things with the puck that I’ve never seen before,” Trivigno said after Leonard’s game winner against UConn. “I probably shouldn’t say this because you’re not supposed to be watching the puck when you’re on the ice, but when I see him pick up some speed, I’m like, ‘Here we go. He’s going to put it through a defenseman’s legs.’ He’s insane to watch.”