Chaffee finishes his UMass career with 95 points in 108 games 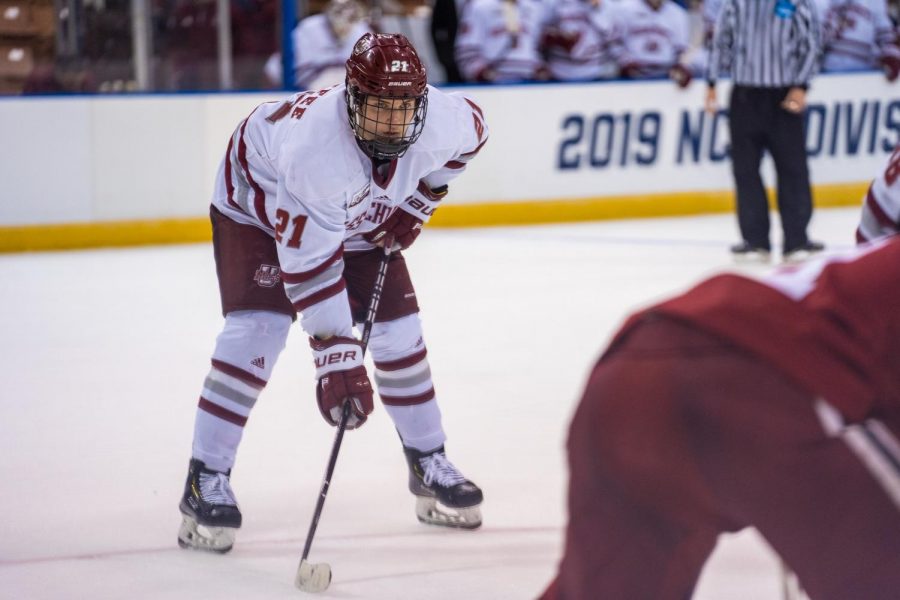 Another Massachusetts hockey player is off to the National Hockey League.

The Minnesota Wild announced Tuesday the signing of UMass forward and co-captain Mitchell Chaffee to a two-year, entry-level contract that begins in the 2020-21 campaign.

“That’s been expected all year,” Minuteman coach Greg Carvel said of Chaffee’s signing. “He was a top free agent at the end of last year. We talked with Mitchell and we all agreed another year was in his best interest and he’d be more prepared.”

The move worked, as Chaffee was on pace to be one of the top point-getters in college hockey this past season before being sidelined in March with an injury. His 29 points in 30 games were oh-so-close to a point-per-game pace.

Even after the injury, he still finished second among all Minutemen in points.

“He’s still a high, high-level prospect and he had a large number of teams he could’ve signed with,” Carvel said. “He’s put himself in a great position to have that choice.”

After going undrafted, Chaffee became one of the most sought-after free agents in college hockey. His point production – 95 points in 108 games played – mixed with his power forward build make him an ideal NHL prospect.

Carvel had a hard time understanding why he wasn’t drafted after his first season.

“We go back to after his freshman year when all three of us on the coaching staff were telling NHL teams ‘you need to draft this kid. Like draft him late, but draft him’,” Carvel said. “A year later they’re all wishing they did that.

“Mitch is a rarity at our level,” Carvel went on to say. “There’s not many power forwards, there’s not many kids that are physically effective and can score goals.”

Chaffee’s departure marks the fifth UMass player to be signed to NHL organizations in the past two seasons. Last offseason saw Cale Makar head to the Colorado Avalanche, Mario Ferraro to the San Jose Sharks and Jacob Pritchard to the Carolina Hurricanes.

This offseason has already seen Jake McLaughlin go to the Vegas Golden Knights on an AHL deal and now Chaffee to the Wild. Carvel expects John Leonard will “most likely” sign with the San Jose Sharks. Leonard was taken in the sixth round with the 182nd pick in the 2018 NHL Entry Draft.

“I think that’s just a really good sign for our program that kids are being chased after and being drafted after coming into the program,” Carvel said. “May see that again at the draft this year. Matt Kessel is eligible. Wouldn’t be surprised to see him get drafted. It’s just a good sign that our program is developing kids and making them better hockey players and preparing them for the next level.”

The next question becomes: how will Chaffee perform in the NHL? Though the Wild sit one point back of a Wild Card spot prior to the NHL suspending play, the team is in a rebuild, only opening up more of a chance for Chaffee to see ice-time next season.

“It’s hard for me to project,” Carvel said of Chaffee’s game translating to the NHL. “I think it’s a bigger step for these kids when they come from the USHL level to the Division I level than it is when they go from NCAA to pro. I think it’s actually an easier transition. But the competition will be really stiff.

“The nice thing for Mitch is he put himself in a situation to go to a team where he’s going to have the best chance to probably play where he was going to fill in that team’s need.”

The Minutemen lost their two best defensemen in Makar and Ferraro last offseason. This year sees them lose Chaffee and probably Leonard – their two highest-scoring forwards.

Despite all that, Carvel is happy to see Chaffee moving on.

“Excited for him that he’s able to pick his spot,” he said. “The type of player that he is, he’s going to have a lot of opportunity to play on their big team.”