Céline Sciamma’s latest feature hypnotizes audiences with both what it does and doesn’t indulge in. You should let it hypnotize you, too. 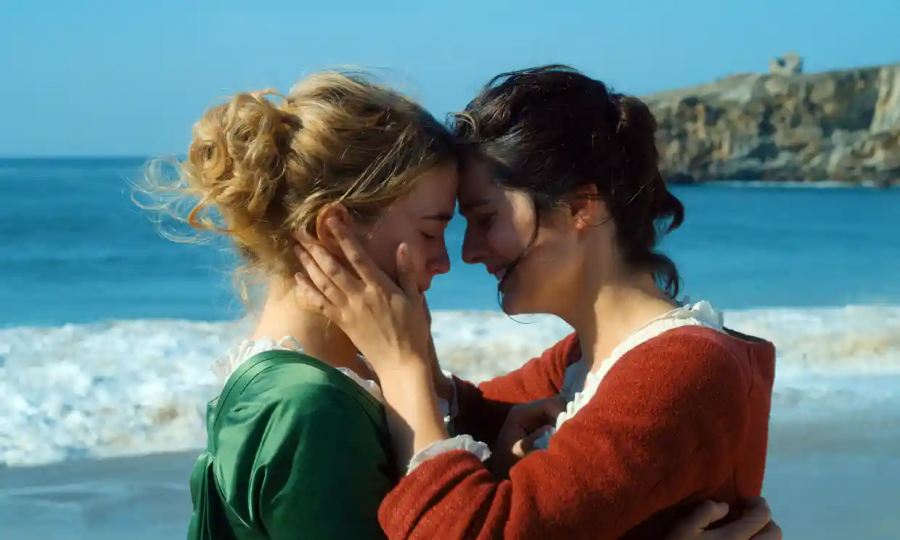 The majority of Céline Sciamma’s “Portrait of a Lady on Fire” (in French,  “Portrait de la jeune fille en feu”) is without music. The majority of it is also without the two leads embracing their love for each other. The leads go an hour and 20 minutes before smiling at each other. Please don’t take this to mean that this film is a dry period piece about emotionless women. Quite the opposite is true: our leads go through a range of emotions and the film takes the audience along for the ride.

One of the first examples of this film holding back on its audience before unleashing itself in a spectacular way is with the introduction of Héloïse. We do not see her face at all for a good while, even when she is around. She is spoken of by her mother and the housekeeper, Sophie, in a vague and mysterious way. Their description of her precedes Marianne meeting her. Marianne is told that she must paint Héloïse in secret, because the last artist who tried to paint her failed and she hid her face from him. The reason that is so important is that this portrait will seal Héloïse’s fate. It will be sent to her prospective husband, and if he approves, she will be shipped off to marry him without ever having met or corresponded with him. Héloïse believes Marianne only serves as a companion for walks. The Countess, Héloïse’s mother, is scared to let her out alone after something initially unsaid happened to Héloïse’s sister. This fear from The Countess is a running theme of the film.

We’ve seen promotional materials and we know this is a romance, so why does the audience wait so intensely to see Héloïse’s face? Marianne comes down to meet her for their first walk, and the young mistress’ face and figure are hidden under a billowy hooded cloak. She runs ahead of Marianne, and the camera becomes trained on the back of Héloïse’s hood. As she runs, the hood bounces, and slowly but surely, after what seems like forever, a peak of Héloïse’s blonde hair is shown, and then the whole of the back of her head. It is a beautiful shock when we see it, a reward for waiting.

She runs to the cliff side and Marianne fearfully and breathlessly runs behind her. With the ocean facing her, Héloïse turns and we see her face for the first time. Even though many of us have seen it before, we can’t help but have our breath taken away. The blue ocean behind her, her green and blue eyes, and the defiance and joy on her face is something to behold. Panting, she says that she’s dreamt of that for years. Marianne asks, “Mourir?” (dying), Héloïse responds “Courir” (running).

Over the course of the film, this same pattern continues. We are given flashes of something until, finally, we are given the relief of Sciamma indulging us. Music in the film operates in a similar way. It is not that we miss it when it’s not there, it’s more that it becomes special when it is. There are three instances of music being played in the film, all of which are diegetic (in the world of the film, not just edited in for the audience). Each musical moment is significant to the plot, and thus it is more special to the audience when we hear it. We can take music for granted in 2020, but as is mentioned in the film, people had little exposure to music back then. Héloïse’s knowledge of music was limited to the church. As she newly experiences music, we do too.

Sciamma claims that her film is misunderstood in France. Due to the misogyny very present in France and its film industry, many do not appreciate the subtlety and care Sciamma brings with her piece. According to Sciamma, French critics claim the film “lacks flesh” and isn’t “hot”- this is at odds with how the majority of others feel. You may be thinking, “what the hell does sexual chemistry have to do with misogyny?” It is because of the revolutionary way in which Sciamma’s work utilizes the so-called “female gaze”. The film does not unnecessarily linger or obsess over the women’s bodies or show graphic sex, like other French cinema often does. Instead, it utilizes the particular way in which women love and desire each other to tell the story. In this case, it means extremely tense scenes in which the audience doesn’t know what will happen next: Héloïse and Marianne get close to each other, they stare at each other, they speak to each other in intimate ways, but they do not embrace—not yet. They laugh together, they support the housekeeper Sophie together, they create art together.

Only when neither the romantic leads nor the audience can take it anymore do they physically show their emotions for each other. It is a bit touch and go, and Sciamma still doesn’t let them be free with each other for a short while longer. Women, especially women in the 1760s, are not taught to be the first to make a move. We are never taught to be entitled to anyone else’s body, so there is a barrier there that needs to be crossed. They get there slowly, but it’s so much better for it. Their love scenes are not gratuitous, they are sensual and fiery and mean the world to the two of them. Because of the way Sciamma pulls the audience in and takes you with Héloïse and Marianne on this journey, it means the world to you, also.

It’s the same for everything in the film. The details become so intimately yours as they do theirs. No one can articulate this better than Sciamma: “It’s also knowing that the pleasure of being a viewer in cinema is about being immersed in a film … as the film goes more and more and more, you speak the language of the film … suddenly [a tiny detail] means something for you as much as it means something for the character.”

The film has been meticulously and intentionally written and directed to give the audience the most immersive experience possible. We can smell the paint, we can taste the sea, we can feel the fabric of their dresses: when I saw this film in theaters the room was deadly quiet for most of it. None of us wanted to be anywhere else but that world, and for an hour and 59 minutes we didn’t have to be.