Touri: With one final argument, Tre Mitchell cemented his case for All-Conference First Team on Saturday

Mitchell’s 34 points, 12 rebounds not quite enough for UMass on Saturday 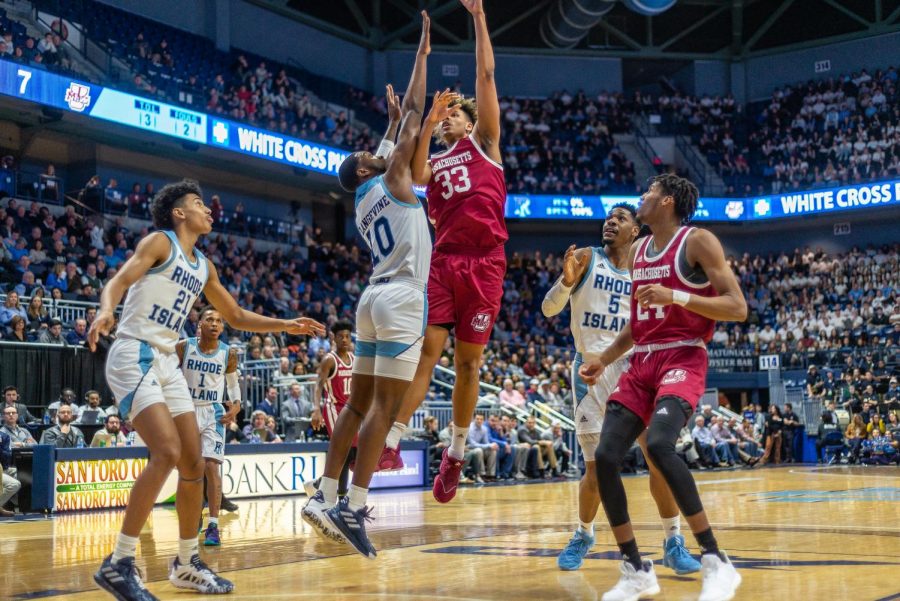 I’m not sure whether the fourth three wrapped it up, or the fifth, or the sixth — but one way or the other, Tre Mitchell made his case loud and clear on Saturday.

With a ridiculous 34-point, 12-rebound double-double that was one 50-50 whistle from dragging the Massachusetts men’s basketball team to a statement win over Rhode Island on Saturday, Mitchell’s argument for a spot on the All Atlantic-10 First Team is just about bulletproof.

If we’re making the case purely statistically, Mitchell is impossible to deny. He’s Player C in this list of the top big men in the A-10; the only guy with a line that might top his is Obi Toppin — who very well might win one of multiple national player of the year awards, let alone the A-10’s — who has posted very similar numbers, albeit with noticeably better efficiency on a team that just finished sweeping the A-10.

Players A and D are Richmond’s Grant Golden and Duquesne’s Marcus Weathers, the only other bigs in the A-10 that I think have any sort of argument for a place on the All-Conference First Team. They’re older players on better teams, but they aren’t even in Mitchell’s league statistically.

That brings us to the one thing that might be troublesome for Mitchell’s case: he’s a freshman on a team that’s finished 8-10 in conference play.

Because it’s the A-10 coaches who vote and they have a tendency to value upperclassmen on winning teams, I wonder if there’s potential for a big snub on that front. Assuming Toppin is not the only big who makes the First Team, do the coaches try to rewards Golden for Richmond’s strong conference slate, or Weathers for his role in helping the Dukes to within a win of a double-bye?

I looked back at the last 10 years of A-10 award voting and there’s a pretty stark pattern: of the 50 players named to the All-Conference First Team in the last decade, one was a freshman, five were sophomore, 15 were juniors and 29 were seniors. The freshman was Toppin last season; before that, you have to go back to 1987-88 to find another rookie, Temple’s Mark Macon.

While it’s possible that a few coaches might be hesitant to vote for a freshman as a First Teamer, I do think Mitchell’s earned the respect of too many of them to miss out at this point. Here’s URI coach David Cox, after Mitchell torched his Rams for 34 on Saturday: “”Tre Mitchell is one of the best big men in the country, regardless of class… to be honest with you, we just couldn’t stop him. I’ll be honest with you.”

Asked if he’d ever seen a player like Mitchell in the A-10, Cox said, “No. Not with the combination of agility, strength and skillset, no. I’ve seen really good athletes before, really good dunkers, really good post players, maybe some big men that can stretch the floor — he can do it all. He can do it all.”

Simply put, no big man in the A-10 — not even Toppin — has been as dominant as Mitchell has been since the start of conference play. The freshman came up against the three best defensive big men in the A-10 for my money, Marcus Santos-Silva, Hasahn French and Cyril Langevine, and averaged 25.4 points in five games against them. He went toe-to-toe with the league’s best night in and night out, faced double team after double team, was the sole focal point of every opponents scouting report on defense and still put up perhaps the A-10’s best numbers.

Tre Mitchell should be a lock for an All-Conference First Team spot. Anything else would just be a little silly.

By the way — Player E up in that list is actually not an A-10 big in conference play this season; it’s Marcus Camby in his 1995-96 campaign when he swept every national player of the year award available. I’m definitely not making that comparison and just stuck it in there for fun — but, you know, food for thought.