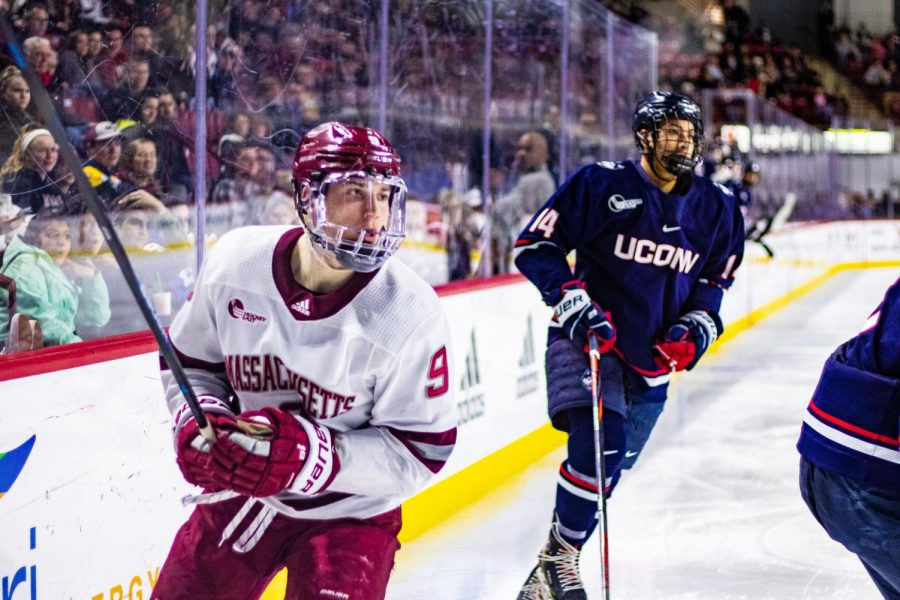 When UConn forward Jake Flynn tied the game up 2-2 halfway through the third period, it looked like the final 20 minutes was shaping up to be more of the same for the Massachusetts hockey team on Saturday night.

UMass (20-11-2, 13-8-2 Hockey East) entered the third up 2-1, which has been a death sentence of late for them. In two of their previous three games prior to Saturday, the Minutemen held that same score going into the final 20 minutes and lost it.

“That was a character win,” Greg Carvel said. “UConn’s one of the hottest teams in the country, they outplayed us last night, we needed these two points. The final score I don’t think is real indicative of the game. I thought we played extremely well.”

At the time it looked like insurance, but John Leonard’s rebound goal with a hair over three minutes to go in the third ended up being the game-winner. It came off a Zac Jones shot from the point, it sat around the UConn net for a bit and Leonard slammed it home.

That put Leonard’s goal total for the season at 27 – a Division I program record for the regular season.

Trivigno’s goal came at an even bigger moment with UConn and UMass knotted up 2-2.

“He has really good vision,” Trivigno said of Del Gaizo on the goal. “He saw me right through the defenseman and I just held onto the puck pretty much.”

Prior to the third period, UMass’ scoring came from one place: Marc Del Gaizo.

The first of his two lamplighters came less than four minutes into the game with the Mullins faithful needing a reason to explode.

Leonard brought the puck out of the corner to Vomacka’s left. With just a defenseman in front of the UConn net, Leonard picked his head up and found Del Gaizo sneaking in from the point. No. 2 fired one past Vomacka to put the Minutemen ahead early.

“That was a really nice play,” Del Gaizo said of the goal. “That was part of our game plan, popping the puck out from the three in the scrum and having the D go down like I did.”

What might’ve been even more impressive than setting the program’s regular season goals record was Leonard putting down three assists in the win.

It certainly came as a surprise to his coach.

“What?” Carvel said, shocked his leading scorer notched three helpers. “Hobey talk now. Is there a term for three assists in a game? We’ll call it a ‘Leno.’”

Del Gaizo’s second goal came on the power play when Zac Jones found him on the corner of the umbrella formation and the sophomore defenseman fired it through traffic and past Vomacka’s blocker to put UMass back in the lead, 2-1 halfway through the second period.

Murray finished with 31 saves on 34 shots. Filip Lindberg ended Friday’s loss with 35 stops. After calling out the goaltending duo for poor play last weekend, Carvel was certainly much more pleased with them in these two games against the Huskies.

“Oh yeah they responded,” he said. “For sure. We got big saves both nights whereas last week at Lowell, I didn’t feel like we got much of anything. So, they made big saves. To get those guys on track is a big part of it, too.”

13 seconds after going down 4-2 in the third period, the Huskies responded when Carter Turnbull retrieved a blocked shot in front of Murray and put it over his blocker to cut the lead late.

The win for UMass was made even more impressive by the lack of bodies it had to work with.

Already without Philip Lagunov, Cal Kiefiuk, Mitchell Chaffee and Jeremy Davidson, the Minutemen lost George Mika in the first period, forcing Carvel to roll three lines and play his top-six for an absurd number of minutes. Defenseman, and usual healthy scratch, Kolby Vegara jumped up on the third line and played a consistent shift, laying a basketful of hits.

“I have no bodies,” Carvel said. “We have nobody left. Everybody’s hurt. Those kids were all stars tonight by the energy they brought and how hard they competed through two nights against a team we battled with for second place.”

The win puts UMass in sole possession of second place in Hockey East with 28 points. With last night’s UConn win, the Huskies and the Minutemen entered Saturday deadlocked for second.

Not only was this a big win in terms of character for UMass, but it was also extremely important in terms of Hockey East.

“Nobody thought UMass and UConn would be playing for second place [in the] second to last weekend of the season,” Carvel said. “But we were. Very proud of our guys. Everyone I’m sure will give us a hard time for the game last night and that’s on us. But again, we’re doing this smoke and mirrors right now and that’s a testament to the players in the locker room.”