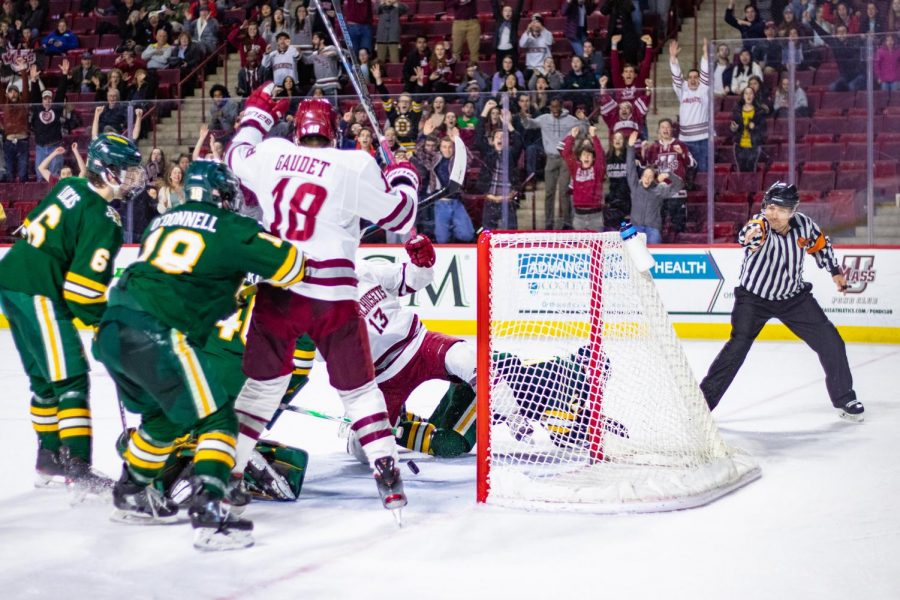 With two and a half minutes left and the game still scoreless, Lekkas made his 42nd save of the night, denying Zac Jones’ shot from the point. Reed Lebster—on his birthday—got to the puck on the back post and jammed the rebound past the senior goaltender to give UMass (21-11-2, 14-8-2 Hockey East) a late 1-0 lead that held until the final buzzer

“It’s a good birthday present,” Lebster said, “and we got the win too, so it’s nice.”

Lekkas kept the Catamounts in the game up to that point, making save after save. Having been outplayed for much of the game, UVM found itself tied with the Minutemen deep into the third thanks to the play of Lekkas and jamming up the dangerous areas around the net.

“Their game plan was for them to win 1-0,” coach Greg Carvel said. “They collapse hard to net, they make you pass the puck to the point, then they block shots.”

The already lopsided shots on net of 45-17 in favor of UMass tell only half the story as the Minutemen generated 91 total shots on the night. The Catamounts collapsing in front of the net pushed a good number of those aside as 26 shots were blocked on their way to the net.

UMass looked as though they might let the game slip away at points early in the third period.

Less than two minutes into the final frame UVM managed to get a one-on-one chance in front of Minuteman goaltender Matt Murray. However, Johnny DeRoche’s shot rang off the crossbar, narrowly missing flipping the tides in favor of the Catamounts.

A few minutes later, UVM tested Murray again. This time the junior netminder was up to the challenge, stopping Matt Alvaro’s shot from the low slot.

The Catamounts brief offensive outburst continued and with 15:45 remaining in the game Murray made a stop with his pad that left the puck out in front of net. With Vermont’s Ace Cowans rushing toward the free puck, Murray lunged forward to poke the puck to safety.

Thursday night showcased two goalies at the top of their games with Lekkas stopping 44 of 45 shots and Murray pitching the eighth shutout of his UMass career.

“I think [Lekkas] is an amazing goalie,” Murray said. “He’s had a hell of a career and going up against him for tonight at least was definitely a test and you have to be on top of your game.”

The rest of the third period was all UMass with the team threatening with two-plus minutes of zone time that came to a close with another Lekkas save at the 3:50 marks.

“I thought [Chaffee] was good—strong, he looks reenergized,” Carvel said. “I don’t think he had a ton of scoring chances but his presence was there and that was a huge positive for me tonight.”

While the Minutemen walked away from Thursday night with a win, it was far from a flawless game. The power play, which has struggled all year long, had itself another scoreless night. That time the unit failed to convert on five chances, including four in the second period alone.