Tre Mitchell dropped 34 points and 12 rebounds in the loss 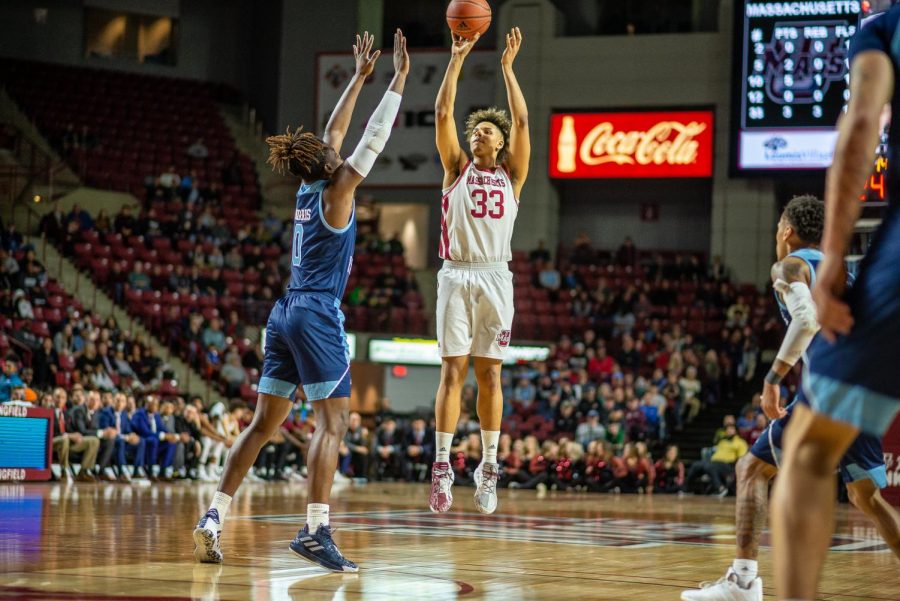 The Massachusetts men’s basketball team went down to the wire with Rhode Island on Saturday, losing 64-63 at home.

UMass (14-17, 8-10 Atlantic 10) found a renewed effort midway through the first half after being down by as many as 17 points. The wave of momentum and 34 points from freshman phenom Tre Mitchell brought the Minutemen a late foul away from pulling out the upset.

“I thought that our guys — against a team that has a lot of veterans and seniors, an older basketball team — showed great maturity in the second half, especially,” coach Matt McCall said.

UMass jumped out to an early 6-4 lead on the backs of a pair of 3-points by Preston Santos and Mitchell. From there, however, things went south for the Minutemen offensively. For the next eight minutes and nine seconds of the game, UMass didn’t score; the drought led to the Rams (21-9, 13-5 A-10) jumping out to a 23-6 lead.

“We didn’t get off to a great start, got down 17 in the first half,” McCall said. “I’m sure the whole gym probably heard me when I called that timeout, and in the timeout, about having pride and some fight. That’s all we really talked about heading into the game, was pride and fight.”

The Minutemen slowly started to crawl their way back into the game. At first, it was mostly due to foul shots, as each team found themselves in the bonus very early on. The deficit reached its apex at 17 points when URI led 27-10 with 8:21 to go in the half. UMass began chipping at it slowly and put its foot on the gas at the 6:21 mark, when Sean East hit a 3-pointer to make it a 13-point game. Keon Clergeot followed that up the next possession with a three of his own to cut the lead to 10. After a layup by URI’s Fatts Russell, Mitchell joined in on the fun and hit a three to get the deficit in the single digits.

As McCall preached effort on both ends, his players complied. The Rams began a short stretch where they struggled to score, and UMass got within as low as four points before the halftime buzzer sounded and URI was in the lead 39-32.

The second half started almost exactly like the first did. UMass scored a couple of buckets, but ultimately fell into a drought and the Rams jumped out to a double-digit lead. This time the lead went as much as 14 points with 12:55 remaining.

A pair of layups by Samba Diallo and Carl Pierre brought the score back to the single digits, where it would remain for the rest of the game. At that point, URI was up 55-46.

The freshman hit his fourth 3-pointer of the night to bring UMass within six. A pair of Dibaji Walker free throws followed to bring the score to 55-51 URI.

A Jacob Toppin layup was negated by a pair of East free throws before Mitchell hit his fifth three of the game to bring the Minutemen within one point. Tyrese Martin split a pair of free throws to put the Rams up by two points, but Mitchell responded with his sixth 3-pointer of the night to give UMass its first lead since opening minutes.

Jeff Dowtin hit a jumper to give URI a one-point lead and Mitchell raced down the floor and made a layup to take the lead right back.

Russell hit a layup of his own, but Mitchell was fouled and sunk a pair of free throws to give UMass a 63-62 lead with just nine seconds remaining.

The Rams had one timeout left but elected not to take it. Instead, Russell drove the full length of the floor and was met by Mitchell at the rim, who seemed to block the shot, but a foul was called, sending Russell to the charity stripe for a chance to win the game.

He did just that.

With just over two seconds remaining and no timeouts, Pierre heaved a shot from beyond half-court that was too high and the Rams sealed the victory.

“I was just trying to find my teammates and Tre was making me look good,” East said.

UMass will play VCU on Thursday at noon in its opening game of the Atlantic 10 Tournament in Brooklyn, NY.

Javier Melo can be reached at [email protected], and followed on Twitter @JMeloSports.