Minutemen have won two of their last three road games 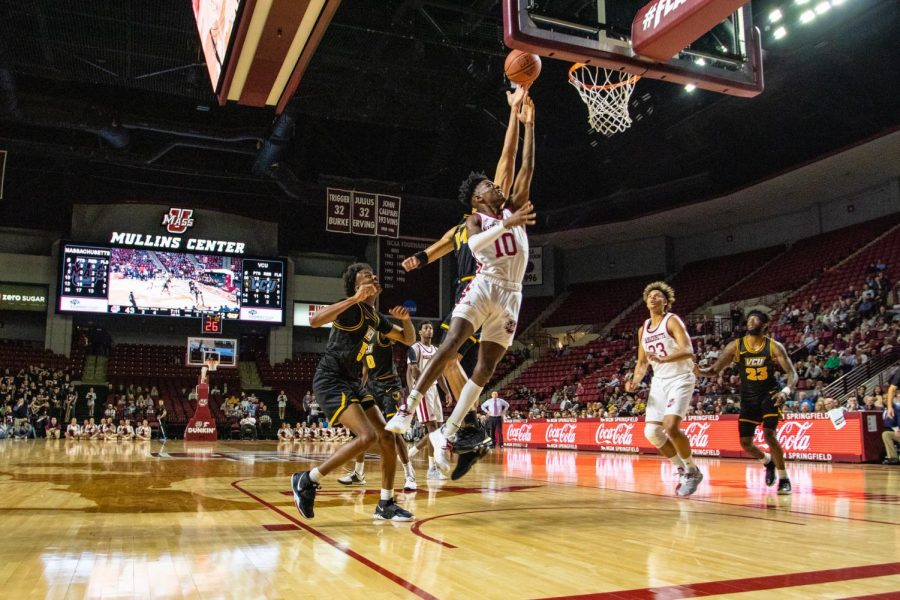 The Massachusetts men’s basketball team won a crucial road game against La Salle 75-64 on Wednesday night to secure a first-round bye in the Atlantic 10 Tournament.

UMass (14-16, 8-9 Atlantic 10) seemed to string together multiple baskets or defensive stops when it mattered. Despite consistent pressure by the Explorers (14-15, 5-12 A-10), the Minutemen were able to walk away with their second conference road win in the last three road games.

“It was a great team win,” freshman Sean East said. “Preston Santos doing what he does – rebounding, defending everything, big threes. Tre [Mitchell] came and kept doing what he’s been doing, Carl [Pierre] playing great defense, Keon [Clergeot], Samba [Diallo], Dibaji [Walker] hitting a big three when we needed one. Everyone came in and had good minutes and we’re just trying to keep it rolling.”

The first half was characterized by two things: UMass turning the ball over and La Salle not being able to score. The Minutemen turned the ball over nine times in the first period, which led to a lack of rhythm for the offense throughout most of the half. The Explorers just couldn’t buy a basket and despite the multiple turnovers and clean looks on shots, they shot just 32 percent from the field and a staggering 3-of-12 from the 3-point line.

The game started with UMass jumping out to a 6-2 lead on a pair of triples from Tre Mitchell and Preston Santos. The first seven possessions for UMass was either a three or a turnover. Still, La Salle just couldn’t convert on its opportunities and allowed the Minutemen to maintain a firm grasp on the game.

The two teams traded the lead back and forth until the 13:22 mark, when Keon Clergeot was fouled on a 3-point make and converted the free throw to give the Minutemen a 15-12 lead. Despite multiple turnovers and a cold stretch where nobody could get anything to fall, the Explorers never regained the lead.

With a 21-19 lead, UMass went on an 8-0 run sparked by an East step-back 3-pointer as the shot clock expired and a Clergeot three that rattled around the rim multiple times before falling. During this stretch, the Explorers didn’t score for over six minutes before Saul Phiri hit a 3-pointer to cut into the UMass lead. A Jared Kimbrough steal and flush showed signs of hope, but with halftime looming, Mitchell caught a Clergeot airball and finished it just before time expired.

UMass ended the half with a 31-24 lead. Mitchell led all scorers with nine points and tacked on five rebounds. Santos and Clergeot finished with eight and seven points, respectively.

The second half of basketball was much more even. Both teams traded baskets throughout the half and whenever UMass strung together a pair of scores, the Explorers were right there to match them. Whenever La Salle seemed to string together multiple stops and get a pair of baskets to fall, the Minutemen would hit a three or get an and-one to cut the momentum.

La Salle managed to get the deficit to as little as three points multiple times, but weren’t able to get over the hump. Timely baskets and defensive stops seemed to always shift the momentum in favor of the Minutemen at the right time. Whether it was the East jumper that extended the lead to five or his flashy dish to Mitchell for three on the next possession, UMass just had lady luck on its side when it needed it.

Late in the game, the Explorers kept fouling the Minutemen, who kept hitting their free throws, and just couldn’t match the production on offense. When the final buzzer sounded, UMass had won the game 75-64.

The second half for UMass was defined by the play of East. The freshman scored 15 points in the second half and really created the majority of the offense for the Minutemen down the stretch. He finished 9-of-10 at the free throw line and the ones he hit towards the end of the game sealed the win for UMass.

“He was huge,” coach Matt McCall said. “I thought he made some big plays in there to Tre Mitchell as well, hit him on a roll a couple of times. He just played a terrific floor game for us and made his free throws, took care of the ball.

“We’ve been hard on Sean about his defense in there, but we couldn’t take him off the floor today,” McCall continued. “He was doing a terrific job, so we were really happy to see him play the way he did and keep our team poised in certain spots and certain times of the game.”

With the win, UMass has officially secured a bye in the A-10 Tournament and will now focus on seeding when Rhode Island comes to the Mullins Center to close out the regular season on Saturday at 7 p.m.

Javier Melo can be reached at [email protected], and followed on Twitter @JMeloSports.