Djery Baptiste, Davonte Higginbottom and Randall West to be honored 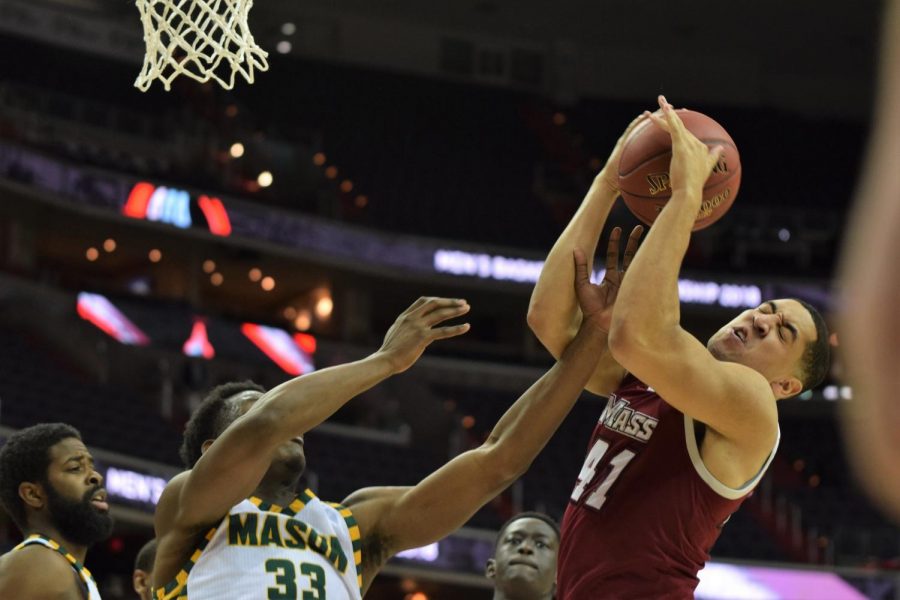 As the regular season comes to a close, the Massachusetts men’s basketball team is set to honor its senior class on Saturday.

The players that will be honored before tip-off are Djery Baptiste, Davonte Higginbottom and Randall West. Each player has had a unique route to get to this stage of their collegiate careers.

“It’s an interesting group to say the least,” coach Matt McCall said. “It’s a special group and each brought something completely different to the table.”

Baptiste transferred to UMass (14-16, 8-9 Atlantic 10) from Vanderbilt midway through last season after graduating early. The graduate student is a native of Haiti and has been instrumental to the progress that the Minutemen have made this season. In the role of backup center this season, Baptiste has offered some strong minutes for UMass when Tre Mitchell comes out and has been a stabilizing force defensively.

Baptiste has provided some of the best moments this season for the Minutemen. Whether it was his four blocks against UMass Lowell to open the season or his multiple pivots and jump hook against Saint Louis that led to him running up the floor holding up two fingers, Baptiste provided many memorable moments in his time in Amherst.

Off the court, Baptiste has flourished in a leadership role with the team. UMass brought in seven freshmen this season. Baptiste relished in being a mentor to them and imparting his wisdom and knowledge about the game to them.

“Just how fast it went by,” Baptiste said. “I feel like I made the most of the opportunities I was given. I’m just feeling very thankful for everybody that I’ve met and the relationships that I’ve made. When I look back, that’s one thing that I’ll be feeling good about. Coach [Kevin] Stallings when I first got to Vanderbilt told me, ‘Once you leave college, you’re not going to remember the points you had, it’s the relationships that you make.’ I think looking back on it, I think that’s what I got out of it.”

Higginbottom was a walk-on to the team this season after spending the last three years as a team manager. Typically, the team holds a try-out for walk-ons. This season, McCall and the coaching staff extended the offer to Higginbottom without holding a try-out, much to the senior’s surprise.

Well known at the UMass Rec Center for his play on the basketball court, Higginbottom has seen sporadic minutes throughout the season, usually appearing when UMass is up or down by a sizable amount. In seven appearances this season, Higginbottom is 2-of-2 from the field. Each was a 3-pointer that set the bench ablaze.

“I didn’t even know, coming into the season, that I would even be on the team,” Higginbottom said. “I was expecting to be a head manager, to do all of the managerial duties, get a job and that was it. Then, they asked me to do this.

“So every day, whether we lost every game or we won every game, I was going to enjoy it because I never thought I’d be able to play again,” Higginbottom continued.

West has one of the most unique routes of anybody in the entirety of college sports. A two-sport athlete in both basketball and football, West had to take a medical redshirt his first year at UMass due to a knee injury he suffered in high school. He appeared in two games for the football team in his redshirt freshman year and two games at quarterback his redshirt sophomore year. In the latter year, he joined the basketball team in mid-February after earning a tryout invitation. He appeared in eight games that year and put up eight points and three blocks against George Mason.

As a redshirt junior, he did not compete for the football team, but did continue playing for the basketball program, appearing in seven games. As a redshirt senior, West earned a starting quarterback role with the football team. As for basketball, he only appeared in three games before his eligibility ran out. Despite that, he is still a constant presence with the team and has taken a leadership role, taking injured freshmen TJ Weeks and John Buggs under his wing.

In what may be the media obligation of his career, West was emotional when speaking about his opportunity with the program.

“I just consider myself blessed that I got the opportunity that I got,” West said. “Since I got hurt, I didn’t really get to have a proper goodbye with basketball my senior year [of high school]. I didn’t really get to play. It was hard for me at times so, really, I don’t know if coach McCall, if he knows how much this meant to me over the years, but, for me and my family it was pretty special.”

UMass will honor its seniors Saturday before hosting Rhode Island at 7 p.m.

Javier Melo can be reach at [email protected], and followed on Twitter @JMeloSports.