Minutemen are on a three-game win streak 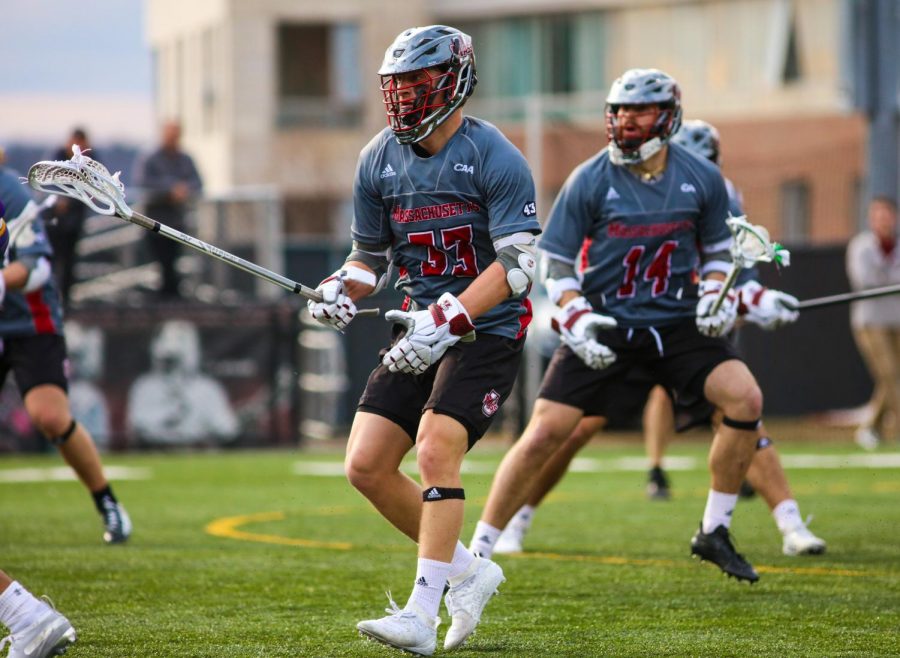 After playing four games in less than two weeks, the Massachusetts men’s lacrosse team got a full week off before hosting Long Island University on Tuesday.

UMass (4-2) has improved in every aspect since its opening week loss to Army West Point. With three wins in a row against UMass Lowell, Yale and Albany, it now turns its attention to a struggling LIU (1-5) team.

One major area of improvement for the Minutemen has been their offense. In their last two games they have scored 30 goals, which is almost as many as they had in their first four games.

“I think we’ve been getting to great spots all year and the past couple games we’ve focused on executing,” attacker Kevin Tobin said. “We’re just really bearing down on executing our opportunities.”

UMass had a mental barrier to push through to this point, having played the toughest part of its schedule on just seven days of rest since its game against Harvard on Feb. 22.

“I think when you play four games in [11] days you have really strong focus,” coach Greg Cannella said. “And I think that focus and sense of urgency kind of helps guys play the way they want to play.”

Next up for the Minutemen are the Sharks, who have struggled all season long, particularly on the defensive side of the ball.

In two games, LIU allowed Fairfield and Hofstra to combine for 100 shots, 61 on goal. The defense will need to take some pressure off of goalie Will Mark in order to turn their season around.

Unfortunately for the Sharks, UMass’ offense has only failed to take 30 or more shots once, in its game against Army West Point, where it only scored four goals. Since then, it has tallied three games with more than 40 shots, including a season-high 48 against Albany this past week.

One noticeable improvement to the Minutemen offense was the decision to switch Kevin Tobin to attack and move Devin Spencer up to midfield. Having frequently been guarded by a long pole anyway, this change came easily for Tobin.

“Basically, the only switch is that I’m on for transition now instead of coming out of the box,” Tobin said. “So, it’s definitely a switch but not a big one for me.”

The story of the season for UMass so far has been the production of its young players. The team is filled with freshmen that are making an impact early on in their college careers.

Freshman Zach Hochman has continued to dominate as a faceoff specialist and won nearly 80 percent of his draws against Albany.

“We want him to be the best player he can possibly be,” Cannella said. “So, if that’s the best faceoff guy, great. If it’s a two-way midfielder, fantastic.”

In addition, Matt Knote has stepped up in goal for the Minutemen so far. However, one freshman who hasn’t received a lot of attention thus far is Tobin’s brother, Mike.

Despite sharing minutes with a lot of older offensive midfielders, M. Tobin has found a way to make an impact and has five goals and four assists this season.

“I’m not surprised,” K. Tobin said. “He brings the same gameday intensity every day, so he’s ready for his moment and he’s seizing it.”

The UMass offense has found scoring from nine different players so far this season. Being that deep offensively makes a huge difference, and has helped launch the team to No. 17 in the country.

A win over LIU next week could help the Minutemen continue their climb towards the top 10. Faceoff is at 2 p.m. at Garber Field.