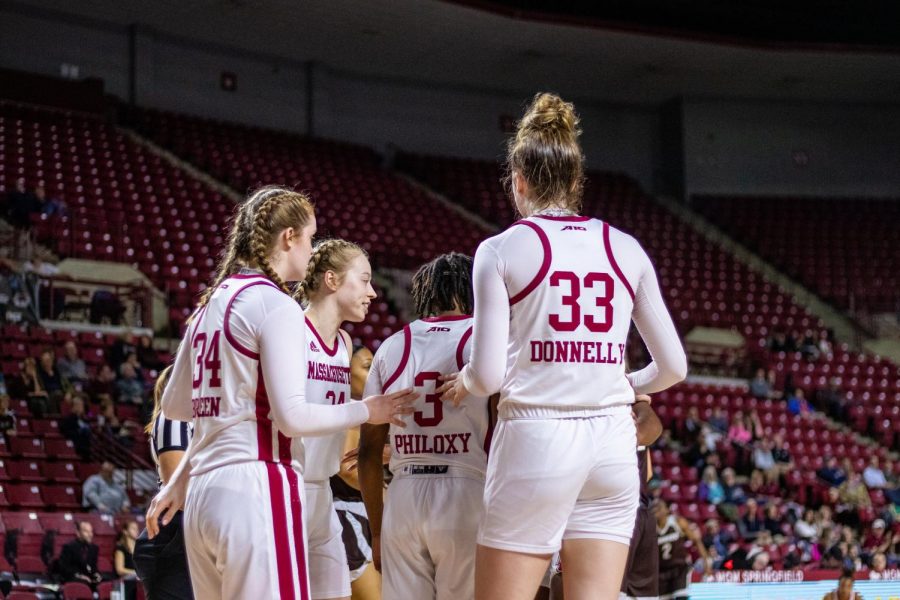 A historic season came to an end for the Massachusetts women’s basketball team Friday afternoon, as the Minutewomen fell 65-52 to Saint Louis in the Atlantic 10 quarterfinals.

“It wasn’t our day,” UMass coach Tory Verdi said. “We struggled to score at times and we missed some open shots. But again, regardless of the score, I’m extremely proud of these guys and everything they’ve done.”

Despite spreading out the offense, the Minutewomen struggled to generate offense in key moments, especially in the second half. UMass only shot 38 percent from the floor in the second half without a single made three.

“Got to give Saint Louis a lot of credit,” Verdi said. “They did a really nice job, especially in the second half, very, very physical. They’re big, they’re physical, they did a great job of knocking down shots.”

Saint Louis, meanwhile, made nine threes, led by freshman Rachel Kent with six. The big swing for the Billikens, however, came when Donnelly picked up her third foul in the second quarter and went to the bench, allowing SLU to get going in the post, which then freed up the perimeter shots.

When Donnelly returned after halftime, she sparked the offense, scoring eight points in the third quarter alone, but UMass was only able to close within three. The Billikens made shots when it counted, including a 7-0 run midway through the fourth quarter to essentially put the game away.

The Minutewomen also couldn’t draw a foul when they needed to, taking just three free throws over the course of the game.

For Leidel, it was a disappointing end to her UMass career, as she recorded 11 points – including the only two makes from three for the Minutewomen – but came up 15 short of the school’s all-time leading scorer, finishing her career with 1,830 points.

Leidel, who entered the program in Verdi’s first year, has seen its rise from perennial A-10 castoffs to a 20-win team.

“We were not good at all when I got here,” Leidel said. “We were starting soccer walk-ons and I didn’t get a sub for maybe 10 games straight. It was really hard, it was exhausting. A lot more sad tears than happy tears. It was a lot of trying to force people to play hard and it’s hard when every game, you shouldn’t have to tell people that they want to play basketball when you’re in a Division I program, but that’s kind of where we were at. You’re not going to win that way.

“We went from that to this year, we’re telling people to not go to the gym because they have cuts on their hands and everyone’s hurting from doing too much.”

The loss marks the third time in Verdi and Leidel’s four years that Saint Louis has bounced UMass from the A-10 Tournament. In Verdi’s first year, the Minutewomen lost by 48.

“13 points, in my estimation, is a little too much right now, and the loss hurts,” Verdi said. “But I think we’ve come full circle.”