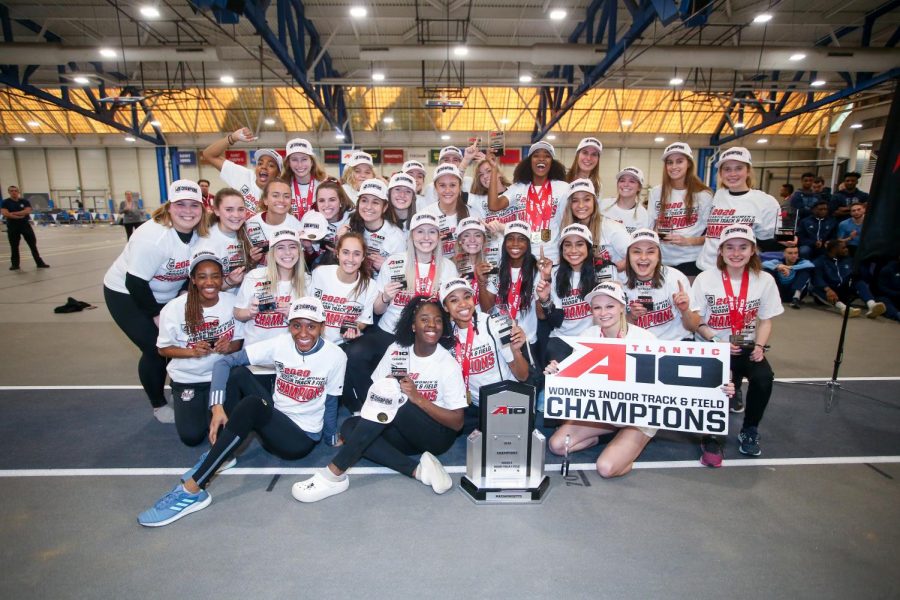 Rhode Island’s Mackal Field House hosted Massachusetts and the rest of the Atlantic 10 in the culmination of the 2019-20 indoor track and field season: the A-10 Championships. Both UMass teams secured a place among the top of the competition after day one to send multiple individual athletes to the finals in their respective events.

With 19 points, the men’s side entered Sunday tied for fourth place out of 10 possible spots. Despite a strong effort, the team went on to slip a few places and finished sixth with 58 points.

Rhode Island took advantage of having a home track and won the men’s meet by a comfortable 12 points over second place George Mason and 72 over VCU in third place.

The Minutewomen showed off with incredible performances throughout to win the meet with 120.5 points, ahead of second place VCU, after entering Sunday in second place themselves trailing only George Mason, who dropped to fourth by the meet’s conclusion.

“After the 4×800 relay we knew that we had won the meet,” coach Julie LaFreniere said, “It was impossible for anyone to catch up to us in the standings.”

Many of the team’s usual top performers carried the load, and none more than Jada Harris, who has steadily improved all winter after already being one of the conference’s most talented hurdlers and high jumpers for the past few seasons.

The highlight of Friday’s events came from Harris when she broke and reset the women’s meet record for the 60-meter hurdles, running 8.45 in the preliminaries and eventually winning the event in Sunday’s final with her best time of the season.

“She’s used to breaking records and is a steady, talented athlete.” LaFreniere said.

Harris also came in second for long jump and won the high jump (1.73 meters), making her the top scorer for UMass, as well as for the meet. High jump was a crucial event for the Minutewomen, as junior Samantha Thompson finished not far behind in third place to help boost UMass in the standings.

A-10 coaches voted Harris the Most Outstanding Field Athlete at the end of the meet.

Noah Kortkamp ran 8.51 seconds in the men’s 60-meter hurdles to take eighth shortly before teammate Lucas Honohan earned fourth in the 400-meter race, edging out VCU’s Johnathan Mitchell (fifth), fellow Minuteman Colin Stoddard (sixth) and the rest of the field by less than one second. It was one of the closest finals of the entire meet.

“You go to conference and it is hardcore competition,” LaFreniere said, “it is extremely loud, like a three-ring circus, and some of our athletes’ eyes just lit up during competition.”

The group of Luke Militello, Christopher Matthews, Nicholas Santos and Erik Engstrom placed third in the distance medley relay, providing UMass with much needed points outside of individual events. They ran an impressive 10:16.72 back on Friday.

UMass came in third in the women’s DMR as well and raced well in the other relays.

The men took second in the 4×800 meter race, and the women fourth.

A duo of Witt and Abigail Collins finished fifth and sixth in the women’s 60-meter dash. Jordan Howard and Michael Cuthbert finished in the same order in the men’s 200-meter dash. Fifth places were common ground all day — Connor Ross added to that when he ran a 2:30.69 in the men’s 1000-meter.

Danielle Notarfrancesco finished second behind Makayla McGowan of VCU in women’s shot put with a throw of 14.83 meters.

Kira Kopec put on a strong performance Saturday for the pentathletes, winning the shot put and placing second in the 60-meter hurdles, long jump and the 800 meters.

Although the women’s team is done competing until the outdoor season, seniors Harris, Thompson, Cowan and Witt will compete individually at the ECAC Division I Collegiate Championships in Boston.

In the meantime, a lot of the UMass track and field team will fly down to Florida on March 14 to practice in warm weather and have a chance to compete over the academic break.

Justin Ekstrom can be contacted at [email protected]