When distant movies and books give horror a new meaning 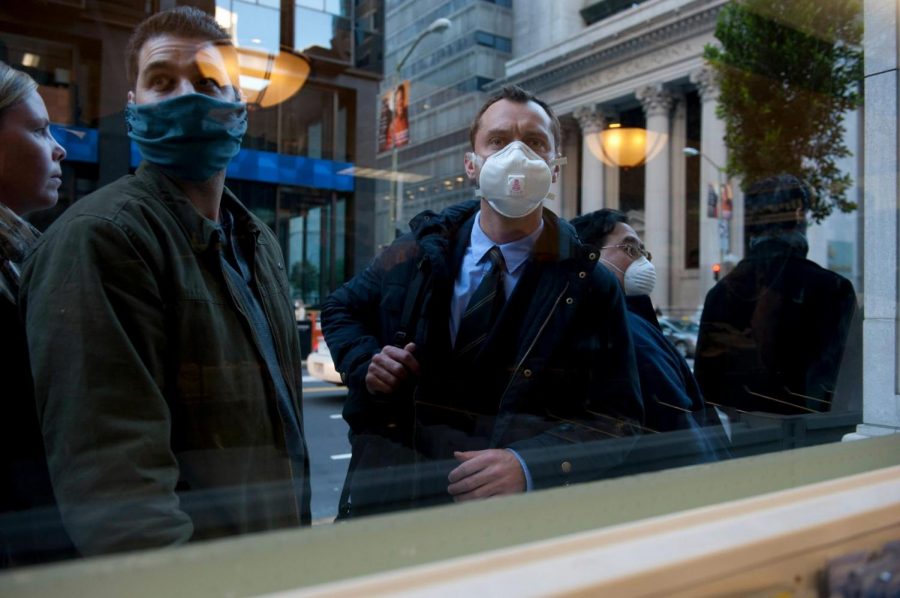 By Quinn He, Assistant Arts Editor

As we look to our phones each morning, our feeds are filled to the brim with updates on the coronavirus that is tearing the fabric of our civilization in two. At times, the future looks bleak, uncertain and confusing as universities close their doors, bars cease to operate and grocery stores find their shelves barer by the day. As the days progress, more cases and deaths push us further toward the possibility of a lockdown to slow the spread of the COVID-19 virus. While we isolate ourselves in our homes and distance ourselves from loved ones and friends, it’s important to pass the time and look to the future in an optimistic light. We can do so by having Zoom hangouts with friends, getting lost in a book, developing new hobbies or perhaps watching a light comedy to ease our minds. On the other hand, one could dive deep into movies and books that portray the uncertainty of this harsh reality we are looking at in an all too realistic horror genre.

“The Plague” by Albert Camus

Originally published in 1947 by author Albert Camus, “The Plague” details, well, a plague, specifically the bubonic plague that sweeps through the city of Oran. Unprepared for the wave of this disease, the plague sweeps through the town well before the government and the people had time to brace. Many aspects of this novel scream parallels to the reality we face today. For five plus months the plague shakes the foundation of everyday life within the town of Oran as the sick flood hospitals to capacity. As more questions than answers arrive from governments, as isolation leaves us longing for loved ones, as the lack of preparation has led doctors scrambling to keep up with piling cases, we must wonder why these past warnings were not heeded. This novel discusses themes relating to the collective suffering of a population and how individuals attempt to cope with the sacrifices they must make in the face of a pandemic. Within the novel, Camus touches on philosophical questions related to humans’ searching for meaning in life in the face of a disease that cares not at all for the individual. Now, more than ever, Camus’s “The Plague” may be an insightful and necessary read while we wait at home as the ever-flowing news crashes in.

This 2011 sci-fi horror matches “The Plague” in its unsettling realism of the current uncertainty we face. “Contagion” follows a deadly virus originating from China as it takes hold of the globe in an extremely short timeframe. Unprepared for such a catastrophic pandemic, doctors from all over the world attempt to figure out what they can about this deadly virus. The story follows a blogger (Jude Law), a husband (Matt Damon) of the wife (Gwyneth Paltrow) who first contracted the disease and doctors (Laurence Fishburne and Kate Winslet) scrambling to figure out the origin of the deadly disease. The film traces the entire timeline of a deadly virus, the madness to contain the disease, the eventual outbreak, the slow response of governments and finally the eventual discovery of a cure. Along the way many people die, and many sacrifices are made by everyday citizens as the world is at the mercy of one virus. What makes “Contagion” horrifying is how real the first half of the movie feels in how it relates to the country as of now. The fear and scrambling of many and the lack of seriousness exhibited by some could push us to the second half of the film when social order decomposes, and mad hysteria ensues.

“I am Legend” directed by Francis Lawrence

In this post-outbreak film, Will Smith portrays the ultimate practitioner of self-isolation and social distancing as his character remains the perceived last man on Earth. Robert Neville, Smith’s character, survives in New York City with only the company of his German shepard while he attempts to find a cure for a disease that has wiped out most of mankind. If you’re finding particular days are harder than others during this time of self-isolation, take notes from Dr. Neville who does at home workouts, attempts to make a scientific breakthrough to save humanity and carries out conversations with mannequins.

Another great example of social isolation comes in the form of 2008’s sequel to “Cloverfield.” In “10 Cloverfield Lane,” Howard (John Goodman), Michelle (Mary Elizabeth Winstead) and Emmett (John Gallagher Jr.) find themselves holed up in Howard’s bunker after a nuclear attack leaves the air outside the bunker irradiated. In the opening shots of the trailer, as well as in the rest of the film, we see scenes of the three strangers collaborating on a puzzle, reading, cooking, listening to music and finding ways to wait out their days in social isolation. Thankfully, for us it is only a highly contagious virus, but for our characters it’s the danger of nuclear radiation that lurks outside their door.

For now, while we wait inside our homes cooped up with friends or family, it’s interesting and helpful to see an entire genre of horror based off a disease or virus ramming its way through society as we once knew it. There are hundreds of books, movies and television shows that use what used to be a fictional reality of a world shaken by sickness. Now, we can look at these past works with a new lens and hopefully either learn from them or become consumed by them.