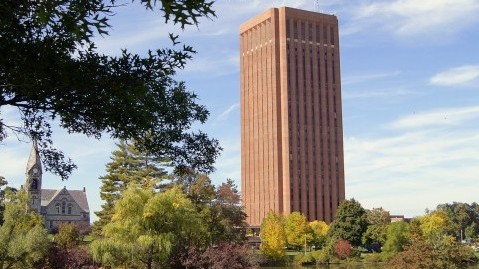 On Thursday, April 23, the University of Massachusetts Amherst Alumni Association hosted “2008 vs 2020: Job Advice During Economic Uncertainty,” a panel of four alumni from the classes of 2008 and 2009.

Over the course of an hour-long Zoom discussion, each former student laid out their experiences between graduation and the present and answered questions from concerned students. In the process, they covered topics ranging from LinkedIn and marketable job skills, to setting goals and managing money.

The event was mediated by senior philosophy major Jared Shein, and introduced by Karen Battistoni, the director of alumni volunteer relations at UMass Alumni Relations. Included in the panel of alumni were Michael Balabanov, a 2008 economics major, Samm Smith, a 2008 journalism major, Greg Walters Jr., a 2009 communication and African American studies major with a certificate in film studies and 2008 hospitality and tourism major Shari Warden.

“This time we’re in is unprecedented, and right now while we’re connected with technology we know that for the class of 2020 your senior year looks a lot different that you wanted it to look, and we acknowledge that, that it is a lot to process and a lot to handle,” said Battistoni, introducing the panel.

The event began with each alumni’s respective accounts of their immediate post-grad jobs, answering a question on how long they had to wait after graduating before finding employment. Some continued prior employment, others struggled to find work and others found work quickly, only to lose it a few months later.

In discussing each of their career paths after their respective introductions to the job market, panelists talked about the challenges of aligning prior goals with new realities.

“I ended up getting into a career through happenstance through another network connection,” said Warden. “I found that I really enjoyed that and pushed that into a career with GE Aviation… I think it’s really important to take into account what do you like about what you’re doing. What I liked about what I was doing was the customer service aspect, so to carry and continue that into another role was what I was looking for.”

Many of the panelists emphasized the importance of networking and making connections, particularly through the use of LinkedIn. Balabanov discussed how LinkedIn has changed the job industry and advised seniors not to be afraid to use connections and to contact people in their fields.

“I think it’s really important if you’re looking for a job in a certain field or a certain company, just see who you know in that company through LinkedIn, reach out to those people on LinkedIn and just see if you can get an informational interview,” he said.

Throughout the talk, the panelists talked about navigating moving from one job to the next, how to decide when to move to a new place or job and how students can use their network to do so. They proceeded to elaborate on topics such as transferable skills and how to hone them, money challenges and reflected on specific situations, such as knowing how to ask for more pay. Calling it a “numbers game.” Walters talked about the importance of “using the tools in front of you,” and not giving up.

“First and foremost, congratulations. You just made a hell of a feat to get through college,” said Walters, when asked to share final thoughts with seniors. “Remember it’s not a sprint, it’s a marathon. Take your time, pace yourself, because it’ll come. Believe you me, I am 34 years old, and yes there’s probably things I want to do, but I am so much happier now than I ever was. So take your time, it’ll come, but just be persistent.”

The UMass Alumni Association will be releasing the recording of the talk with closed captions later this week.

Claire Healy can be reached at [email protected] and on Twitter @clurhealy.